"I really enjoyed the pacing of BuildIt up until a point..."
by corey.holmes.568

EDIT: The game breaking bug has been fixed, but I've moved on.  I'll still recommend playing it though!

I've been going through mobile games like water lately and I wanted to share some of my thoughts on them.  I'm making this into a series just because of the sheer amount of games I've been though so if you would please follow me into this rabbit hole...

The first game on the list is a doozy, or at least it seems like one.  SimCity BuildIt is a spinoff of the iconic series released to the world in December 2014. It's free-to-play with in-app purchases, which I am fan of.  The game has a major flaw which I will talk about later, but I will say this...

The Game is Gorgeous

The amount of detail that went into the visual aspect of this game is simply impeccable.  I thought it was very cool how after I put up a few buildings, I could see my tiny Sims walking around the city their almighty deity/mayor created for them.  I'm not a Sims/Sim City player so this was all a nice surprise for me.  Another nice touch was that the designs of the buildings were randomized, meaning every building looked a little bit different than the one next door.  It's a small thing but it went a long way towards making me feel like my city was unique.

The beauty in this game is in its masked simplicity.  The pacing is just right as you build residential areas to gain money, buy factories to make raw materials, use those to upgrade your homes, and then a subsequent rise in difficulty based on the amount of residents in your city.  Theoretically, things can get crazy complex after just a few days of playing.  The buildup to that isn't overwhelming so there was definitely some thought that went in to the balance.

I really enjoyed the pacing of BuildIt up until a point...

My girlfriend who is an avid player of super-addictive mobile games, brought a massive exploit to light for me.  The exploit was based around how BuildIt increases its difficulty by the total population value. Basically, once you hit a certain level of population, the difficulty ramps up as you find yourself without enough materials to make everyone 100% happy. It's also worth noting that you gain the largest amount Simoleons (BuildIt's main currency) by improving your residential areas. 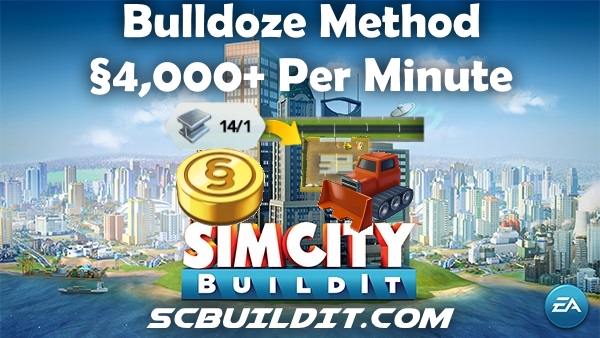 She told me to bulldoze my houses.  All of them. Sounds crazy until you realize the population is reduced meaning the overall material cost goes down, you've gotten partial refunds on all of your bulldozed properties, and now when you build a new house and improve it, you'll receive the same large amount of Simoleons.  This is an infinite money exploit and it totally broke the game for me.

The online material marketplace feature?  Broken.  Which is a shame because I really liked that idea.  I even put in the time to do the math for figuring out a maximum ROI on seeds, a material in Buildit.  Much disappoint.

Overall, I enjoyed my short time with the game.  The level of creativity that BuildIt allowed me to exert over my city's design consistently kept me interested.  The visual design was beautifully polished, and while I didn't mention it too much, the music & sounds were pretty great too.  I usually try to mute the game and play my own music so that was a nice surprise.

I felt like my actions mattered at first then this took me completely out of the game. I'd totally recommend this anyone if they like that sort of thing.