A Review of Gears of War: The Board Game

An excellent conversion of a video game to board game format, one that all designers should look to and be inspired by.
by Kevin S. Behan

When I first saw this game, I had to ask myself "What kind of insane board meeting happened to let this thing come to life?" with a sort of bemusement. Fantasy Flight Games, the producer of many Star Wars and Warhammer board games, is not known for quick cash-grabs. They produce high-quality content, there's a lot of thought that goes into their games, and they're a big part of the reason we're going through a sort of board game renaissance these days.

Gears of War is known for tight, cover based shooting, with tension and stress behind each movement as you out-flank and out-play your foes. Its campaign missions are intense, demanding your focus for the entire length of a stage. Even on the easier difficulties, it's rare for you to be given a chance to "stop caring and run forward". How do you convert all of this to a medium that is generally turn-based while still including the core Gears of War gameplay?

Well. Gears of War: The Board Game does it perfectly. I'm still somewhat in disbelief over it. 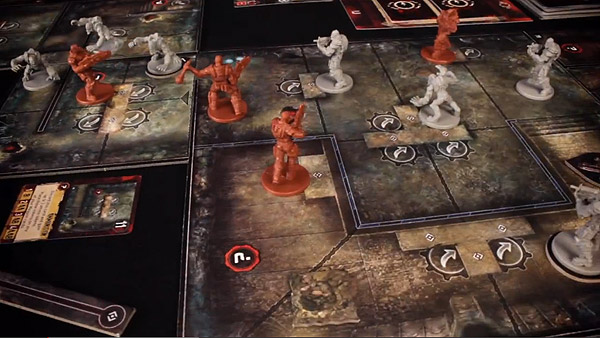 How Gears of War: The Board Game Plays

We'll start with the basics. It's a one-to-four player co-operative game, meaning you can sling it with up to three mates, or go it alone. You choose from the four primary COGs of the original trilogy -- Marcus, Dom, Cole, and Baird, each with a small ability that gives them a slight edge at particular strategies.

You choose your mission -- the campaign-style format meaning you should probably start with mission one if it's your first show -- but the lack of a heavy story means you can tackle them how you please. You set up your map from various cardboard components, giving each level a unique layout before you get going.

This technically is in the 'dungeon crawler' category of board games, but it avoids the trappings of the genre that require a lot of bookkeeping. How much health and ammo you have, how many more shots that grub needs to go down, what special abilities you have, and much more are condensed and refined to keep the game's pacing tight.

Your guns can essentially shoot forever unless it's a special weapon like the boomer. However, you can spend ammunition tokens to get more powerful attacks, with the risk being that once you run out of ammo, that gun is useless to you unless you find more.

Enemies simply have three states of health: full, wounded, and dead. Each state has a target number you need to hit with your attacks for enemies to die, any amount of damage bringing them to the wounded state, which makes eliminating them slightly easier. This means teamwork will preserve ammo and take out enemies before they can even get an attack off. The sheer thematic perfection of the game is what gets me going, and it's mechanically efficient, too.

Your health is represented by your hand of cards and your orders. These let you perform special maneuvers. However, when you spend them you no longer have them as health, and you don't recover it very quickly! Getting behind cover and waiting out the action is the way to recover, again, and it's incredibly similar to how the video game plays. It's bloody genius, and I love it.

And if you go down, you're not out -- you're crawling on the ground until a teammate can get to you, pick you up, and get you an order card back in your hand.

Even the enemies are great. You've got your basics: grubs, grenadier -- "theron guaaards" to quote Baird -- and they all have unique mechanics. But then you get the crazy stuff, like berserkers, who, similar to their video game counterparts, can't truly be harmed without the hammer of dawn. They're blind, but move closer to player characters every time they make an attack option, ready to pummel you into the dirt if you're unlucky enough for them to actually hit you.

The components of this game are gorgeous, too, with highly rendered miniatures that evoke the setting. Each is ready to be painted, though they're color coded with red for player characters and gray for enemies if you're busting out the acrylics.

The tiles used to construct your mission layout are evocatively illustrated, divided into sections that dictate your line of sight in a very simple, clear-cut manner. It even provides cover points for you to slip in and out of that give you a defensive bonus against enemies -- or them one against you.

There Are, However, a Few Flaws

This wouldn't be a fair review without pointing out some flaws. The game can run a little bit long sometimes, expect to spend at least an hour, and can get a little bit dull when players run out of ammunition and are just firing pistol shots. A lot of work can go into a failed mission, dice rolls can be cruel, and if you're not the type to accept that as part of a challenging game, this might not be for you.

And while technically the board game contains no gore or blood, it is based off a M-rated product, which you should keep in mind before giving it to teenagers. However, if you can get past those flaws, it's an absolutely beautiful product.

Gears of War: The Board Game might be a bit of an older game, but I'm calling it out for you primarily because it's such an amazing example of design. And if you missed out on it, you'd really do yourself a service to try and find a copy. It's incredible fun for a group of competitive players, challenging enough where you're not guaranteed to win every mission if you don't play optimally. There are moments where the whole team is cheering good shots, sighing with relief over enemies missing, and panicking as that berserker draws closer and closer.

It's hard to snag a copy these days, but keep an eye out for it. You never know where out-of-print board games will show up.

Our Rating
9
An excellent conversion of a video game to board game format, one that all designers should look to and be inspired by.
Reviewed On: Board Games
What Our Ratings Mean