3 Exciting Revelations From the First 5 Minutes of Dark Souls III: Ashes of Ariandel

The first five minutes of the Dark Souls III DLC has finally been revealed. These are the top three bombshells that you need to know about.
by Jared Elliott

Praise the sun! In an unexpected, yet highly anticipated turn of events, FromSoftware has unleashed exclusive gameplay footage of the upcoming Dark Souls III DLC, Ashes of Ariandel. As if that wasn't enough for fans to drool over, Dark Souls creator Hidetaka Miyazaki has revealed some new insights into the content and theme of the DLC. To make sense of all of this new information, it's time to break down the three most exciting revelations within the new trailer.

If you haven't yet discovered the secret insights hidden in last month's Ashes of Ariandel trailer, you may want to catch up there first. Also, be advised that this list contains spoilers. You have been warned!

3. Sif, The Great Grey Wolf, Lives On in Ariandel

For those who read my recent Ashes of Ariandel list, you know that a brief hint of Sif's return in last month's trailer sent my heart soaring. Though his return at first seemed unlikely, we are given something in the new trailer which has already sent my hype train down the tracks -- a huge wolf that looks a lot like Sif. Because Sif died at the hands of the player in the original Dark Souls, a true return may be unlikely -- but with Miyazaki, there is always more than meets the eye.

It appears that the wolf is not alone, either. At 3:38 in the trailer, a mysterious, hooded warrior is seen fighting alongside him. This warrior is reminiscent of the legendary Knight Artorias, who was Sif's companion and battle partner before falling to the Abyss in Dark Souls. Before meeting his fate, however, Artorias shielded Sif from the power of the Abyss, saving his life. The bond between these two characters was undoubtedly powerful, but how they could possibly reunite in Ariandel after all this time is a mystery.

Still, the wolf attacks the player similarly to how Sif did in Dark Souls, albeit without a giant sword in his mouth to swing around. Regardless of the wolf's identity -- if it has one -- the fight itself looks to be a thrilling experience. The wolf virtually bulldozes the arena, blasting snow in all directions with a vicious snarl. Meanwhile, its lone companion chases after the player on foot. This is similar in concept to the notorious battle with Ornstein and Smough - one fast enemy to keep players on their toes, and one slow enemy to clobber them when least expect it. If we're lucky, this fight could be just as memorable.

2. Miyazaki Confirms that Ariandel is the Painted World...Sort Of

In a recent interview, Miyazaki confirmed that the new world of Ariandel is the a same, yet somehow different Painted World of Ariamis from the original Dark Souls: And indeed, the newly-released footage offers a few hints for fans who may have suspected it all along. The most notable of these is a boss near the end, which bears a strong resemblance to the half-human, half-dragon Crossbreed Priscilla who resides in the Painted World. Both wield scythes and share Priscilla's characteristic pale skin and hair, for example. Yet, admittedly, the Ashes of Ariandel boss lacks Priscilla's tail and is several times smaller than the Crossbreed we meet in Dark Souls. In light of Miyazaki's ambiguous take on the setting, however, fans may be in for a big surprise.

1. The Inhabitants of Ariandel are Terrifying

In the eerie, blizzard-like world of Ariandel, some of the most aggressive enemies of Dark Souls III lurk in the distant fog. They come in an assortment of flavors -- spearmen, swordsmen, pyromancers, and one particularly scary hulk who wields a battleaxe larger than your character. Each is equipped with armor which is apparently foreign to Lothric, yet remains unclear in its origin. 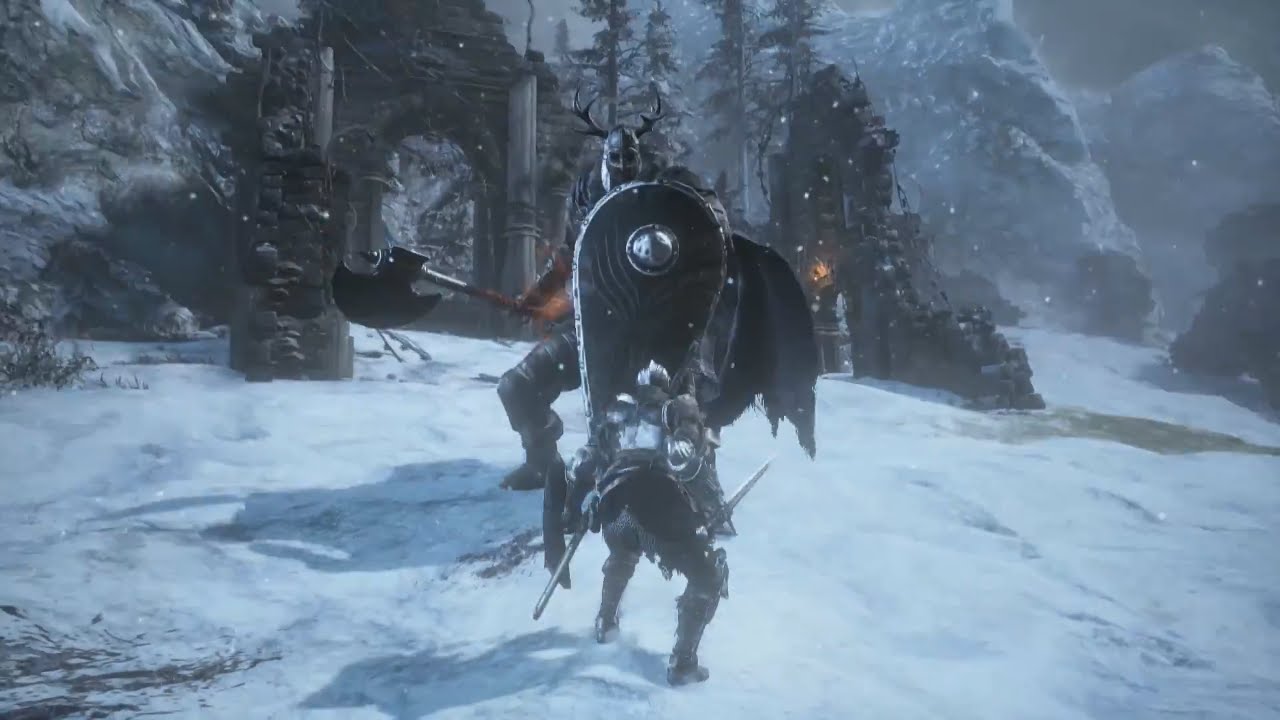 One piece of armor -- an iron helmet adorned with deer antlers -- appears atop the head of the aforementioned hulk, who is undoubtedly the most intimidating enemy in the trailer. First appearing at 2:10 in the new Ashes of Ariandel footage, this enemy is relentless in its attack and often catches the player off guard. This is no small concern due to the extreme force behind each swing of its heavy battleaxe. Surprisingly, this guy isn't a boss enemy - just a steep challenge to keep you on your toes.

Speaking of bosses, Miyazaki revealed in his interview that there will be exactly two. Sadly, it appears that both boss fights may have been spoiled in the new trailer -- the Sif and Priscilla look-alikes. Yet, near the end, the player is seen fighting the creepy, Lordvessel-toting monster that we first saw in last month's trailer. Even stranger, the battle takes place in what appears to be the same arena where not-Priscilla is fought. Could this mystery woman really transform into such a beast? We'll have to wait to find out.