The Aethertech class is less than 24 hours away!
by Ashley Shankle

Ready to reroll yet again and try out the new Aethertech class? Today's the day Aion 4.5 launches, and this time around patch maintenance is happening early.

Today's scheduled maintenance is taking place between 3:30AM PST/5:30AM CST/6:30AM EST to 9AM PST/11AM CST/12PM EST, after which Aion 4.5: Steel Cavalry will be available to login and play should maintenance not be extended.

Users will not be able to access the official site for a three-hour period during maintenance. The Black Cloud Marketplace will be unavailable through maintenance until 11:30AM PST/1:30PM CST/2:30PM EST.

Along with the much-anticipated Aethertech class comes new skills, features, and the brand new Glory Point system to accompany the current Abyss Point system and push 1-Star and above officers even further.

If you are a bit behind on exactly what's to come with the Steel Cavalry update, be sure to take a look at the official Steel Cavalry website.

NCWest Community Manager Hime has posted a rundown of the new Glory Point system on the official forums. Hime also goes into the new dungeon count system. You must be logged into the Aion forums view these links.

Once the game is up and running, NCWest is holding and event to give the game's very first level 65 Aethertech characters a Wild Kitter's Cipher-Blade -- also known as the key to 'that cat Aethertech we keep seeing.' 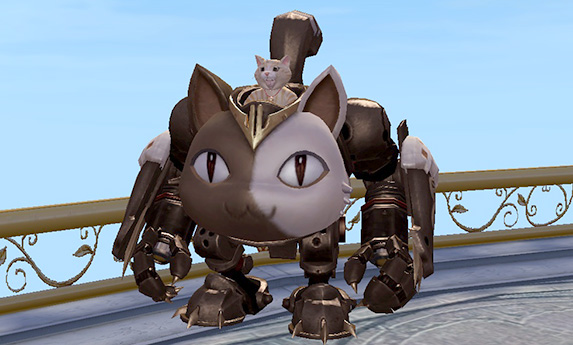 The full rules can be read on the official site, and clearly state no Secret Remedy of Growth items can be used in order to qualify to win. A total of eight characters will receive the prize, with one character per faction on each server being the lucky winners.

Be sure to read the contest announcement on Aion's website. The contest will only run until February 7th, after which server-side data will be compiled and checked to determine the winners. Good luck out there, Daevas!