Crypt of the NecroDancer Review

Crypt of the NecroDancer; the dance-based roguelike you never expected to work.
by Ford James

Sport + horror is a genre combination you wouldn’t expect to work. Racing + strategy would be another. You’d think dance + roguelike would be the same, but somehow Brace Yourself Games have managed to make it work with Crypt of the NecroDancer.

Bouncing from tile to tile, dodging the dangerous fire blast of the red dragon while parrying the lunge of a knight with a sword and making sure a monkey doesn’t leap on your face means any false step is lethal. Despite the pixel art style, the gameplay has a beautiful elegance to it and the feeling of achievement once you successfully manoeuvre your way through the advancing enemies and pick up their precious gold is second to none.

Crypt of the NecroDancer’s disco floor, singing shopkeeper and grooving enemies will have you bopping your head along and tapping your feet in time to the beat in no time, but it’ll likely be short lived as most slip-ups will likely send you right back to the start. Time is of the essence as failing to defeat each floor’s miniboss before the song reaches it’s conclusion will result in a trapdoor appearing beneath your feet, plunging you into a small room with four enemies, one of which is another miniboss you must defeat before leaving the room. This is where Crypt of the NecroDancer excels compared to more traditional roguelikes as usually time is the one thing you have plenty of; pausing for a minute or two to plan your moves and which enemy you’ll take out first is a common theme among classic roguelikes and dungeon crawlers. 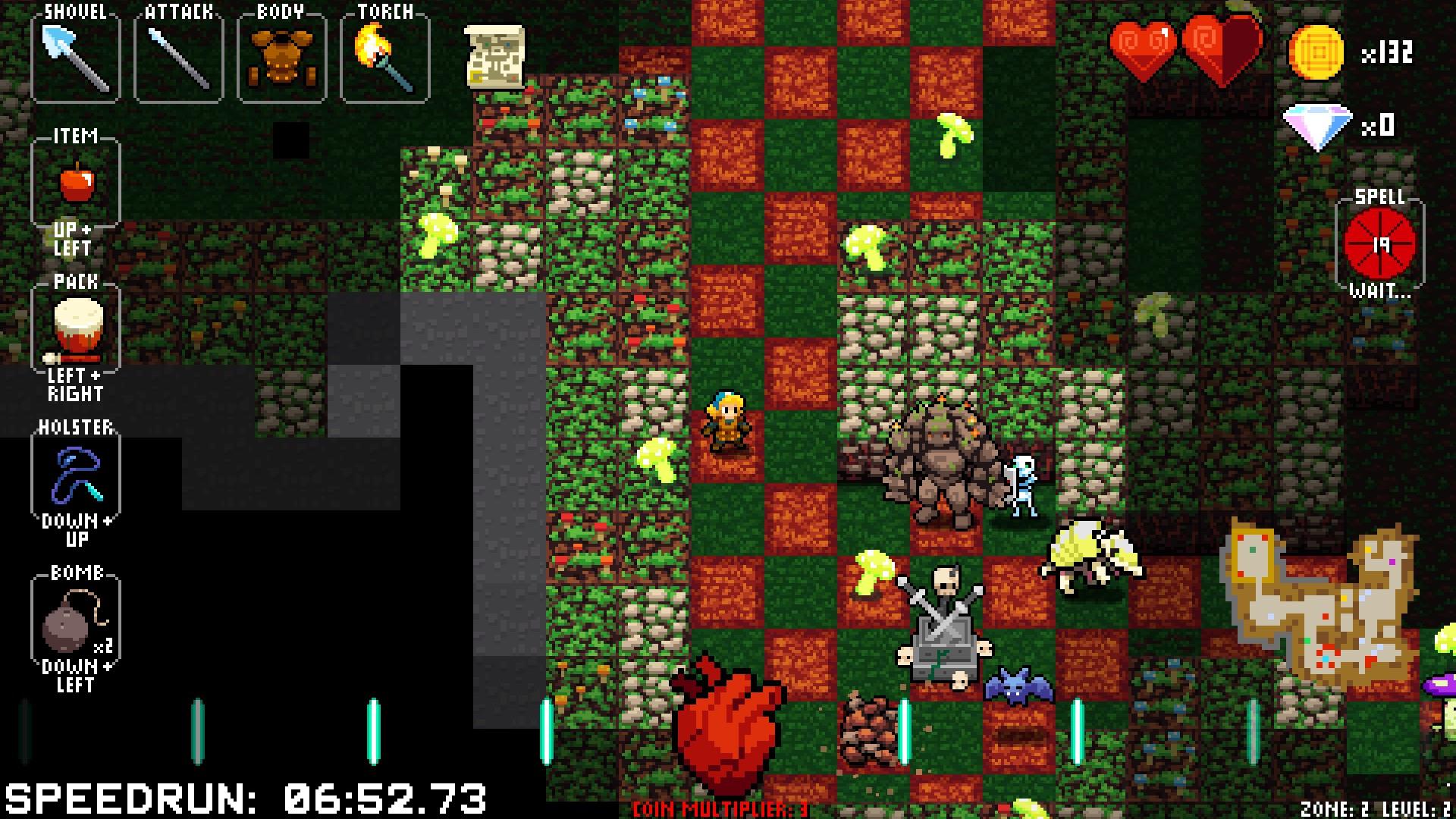 Zone 2 in an All Zones run playing as Cadence

Another mechanic that is prevalent among most, if not all roguelikes is learning enemy movements and patterns; The Binding of Isaac: Rebirth, Spelunky and Rogue Legacy are three popular ones which spring to mind. Crypt of the NecroDancer nails this aspect perfectly, you may often find yourself in the early stages dancing around enemies for a few beats before you go in for the kill, simply to try and memorize the patterns for the future. When you do inevitably fail it’s just a few seconds before you can restart your groove and shuffle through the NecroDancer’s lair.

You start by playing as Cadence who has to delve into the NecroDancer’s lair to save her father Dorian, however her heart has been cursed by the NecroDancer to forever beat in time to the song on each floor. The lair is sectioned into four zones, each with three floors and a unique musical themed boss at the end of each zone. For beginners, it’s surprisingly forgiving as you can play through each zone individually, provided you’ve achieved the requisite of beating the previous zone to unlock the next.

Replayability comes in two forms; despite Cadence being the starting character and main protagonist, there are also plenty of other characters you can unlock through various means, each with their own unique gameplay trait. Eli, for example, cannot wield any weapons but has an infinite stock of bombs and can also kick them at enemies. Bard, who is widely considered as the easiest character to play as, doesn’t have to move in time to the beat and all the enemies simply move when he does. Monk is another; he dies if he picks up any gold whatsoever however he gets one item from every shop for free.

The other main feature to entice players to keep playing is the daily challenge; resetting every day at midnight GMT, players have one attempt to beat the entire game as Cadence and finish with as much gold as possible. It brings an interesting dilemma while playing; should I spend this gold on a better weapon or item in the shop? Or should I save it and go to kill enemies at the other side of the level before progressing to earn more gold but also risk taking damage at the same time? After either dying or completing the run, your score will be submitted to the global leaderboards to see how you fared.

Here’s a friendly warning: some players are bloody good at the game! There’s also an instant replay function so you can watch other players’ runs and try to learn from the best, provided they have the feature enabled.

Intro for the King Conga boss

In a game which features dancing and music as one of its key selling points, it’s pretty important that the soundtrack is, at the very least, good. Thankfully, it is; composed by Danny Baranowsky, it features a mix of electronic and rock alongside a very neat feature which allows you to add your own songs, provided you have the mp3 file. Personal recommendations for players looking for a challenge would be Bangarang by Skrillex and Through the Fire and the Flames by Dragonforce. If you're insane enough, the game is also compatible with a dancemat so channelling your inner Dance Dance Revolution is a possibility!

Crypt of the NecroDancer has a lot of subtle touches which really enhance the experience. The shopkeeper sings along to some part of the tunes, provided you’re within hearing range and the floor will flash disco-style if you’re on a combo. For their first title, Brace Yourself Games undoubtedly nailed what they were going for. It goes without saying that the game might not be for everyone but for existing roguelike fans, Crypt of the NecroDancer is one of the best.

Our Rating
9
Crypt of the NecroDancer; the dance-based roguelike you never expected to work.
Reviewed On: PC
What Our Ratings Mean

Crypt of the Necrodancer Articles
more »