Did Valve Change Things For The Better With The Steam Discovery Update?

Valve delivers a huge overhaul of Steam, but does it help fix the problems or add to them?
by WesleyG

The Steam platform has experienced a period of rapid growth the likes of which it has never seen. Thanks to services like Steam Greenlight and Early Access, Steam has introduced 1,300 new titles just in the past nine months. Unfortunately, this lead to Steam becoming almost unusable as a tool to find quality titles with everything from obviously unfinished titles and nearly 20-year-old kids games took their place among indie darlings and AAA releases. The absolute lack of quality control and ability to filter games effectively has been a problem confronted by gaming critics such as TotalBiscuit and Jim Sterling.

Today, Valve took a step towards fixing these problems with the new Steam Discovery Update. Lets take a look at how this new update looks to change how we find our games.

Once you get past the obvious aesthetic changes like the new color, you'll notice a few key changes. Over on the left side, they've added the ability to search by genre with a simple click instead of having to navigate a drop down menu. There's also a section dedicated to tags that Steam recommends for me. These tags and recommendations a huge part of the new Steam Discovery Update.

You'll also notice that the "Spotlight" area is gone, replaced by a box that says how many deals are going on and giving you easy access to a list of all the deals on Steam. After that, we can see the "New on Steam" and "Recently Updated" lines, both of which now allow for customizability.

Yes, you can now select the kinds of games you want to see on these streams. No longer do you have to see Early Access titles mingle with the full releases if you choose. These kinds of filters are a big focus of the Steam Discovery Update, allowing users to customize their experience like never before.

Probably the biggest change to the front page is the new nearly limitless recommendations list at the bottom of the new home page.

This list generates recommendations based on your playtime with games with certain tags like "indie", the more specific games you last viewed/played, and recommendations from your chosen Curators (more on that in a moment).

It still has a bad habit of drowning you in a title's back catalog, like how the fact I played the newest Tomb Raider title means I'm getting recommended no less than three previous Tomb Raider games. This recommendation system, while not perfect, is more streamlined than its ever been and has the nice touch of showing you real game screenshots instead of just the box art to give you an idea of what the game is about. 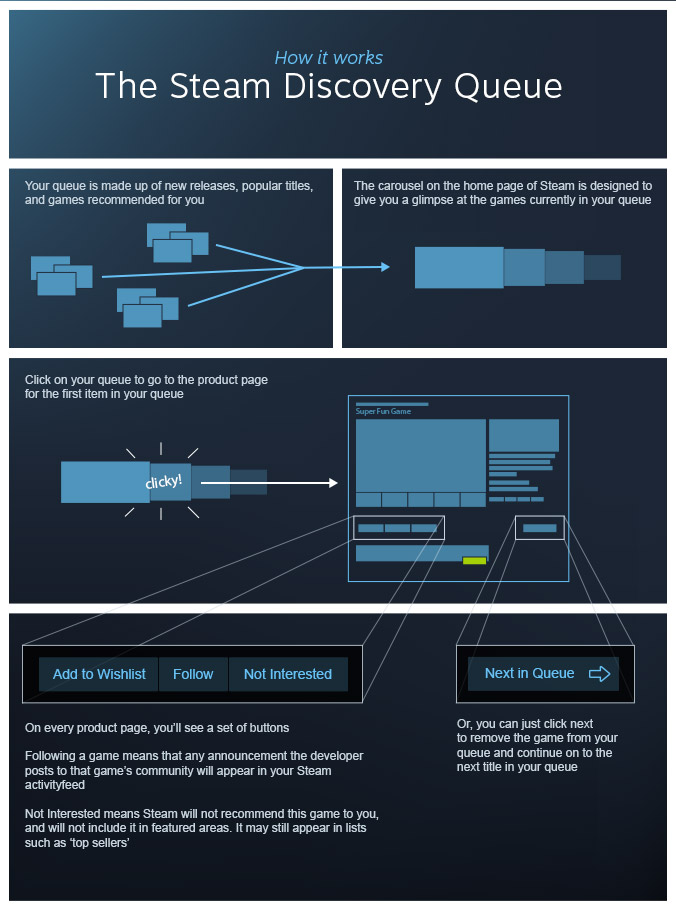 The Discovery Queue is a new tool introduced in the Steam Discovery Update designed to highlight a few games for you based on key variables. It's a neat system that looks like it'll work as a good filter the more you use it. It'll be interesting to see how this will begin to affect what kind of games start showing up on Steam when certain tags start getting a lot of "Not Interested" selected in bulk.

The new Curator system allows anyone who creates a Steam group the ability to become a "Curator" that users can follow and see their game recommendations on the front page and in store pages. Steam Curators might be the most important new aspect added in the Steam Discovery Update. Being able to follow the recommendations of people who you trust and see those recommendations at a glance on store pages will be an incredibly helpful tool in getting the truly great games the visibility they deserve. This is a feature that Steam has desperately needed for a long time and its good to see Valve finally bring it to the platform.

Steam Curators might be the most important new aspect added in the Steam Discovery Update.

The Steam Discovery Update looks to finally address the issues of a flooded game library and lack of oversight by passing the reigns of quality control over to the community. Allowing users to use filters and tags to more effectively narrow their Steam recommendations while giving them access to recommendations from trusted sources, all at a glance, helps make Steam as user-friendly as its ever been.

Time will tell if this new update will change how developers approach the service, but hopefully this new focus on community curation will help put the emphasis on quality titles instead of the ones simply showing up in the "New Releases" list. This update doesn't make the service perfect by any means, but it's a step forward in helping create a system where users can make educated decisions and discover new games that they'd actually want to play.