Margot Robbie doesn't look a thing like classic Harley Quinn, and Rocksteady is the reason.
by CallSignDriver

For a long time, Harley Quinn was one of those characters that was beloved by cartoon and comic fans, but relatively unknown by general audiences. Following her appearance in Batman: Arkham Asylum, however, Harley Quinn has become a much more broadly recognized character, and she's even set to make her film debut in 2016's Suicide Squad.

In 1992, Paul Dini and Bruce Timm created Dr. Harleen Quinzel as a character for Batman: The Animated Series. Harley's voice actress Arleen Sorkin is said to have been the inspiration for the character's name, looks, and personality. An episode of the TV series Days of Our Lives features Sorkin's character in a fantasy setting, wearing a two-tone jester costume that would later serve as the inspiration for Harley's signature tights. 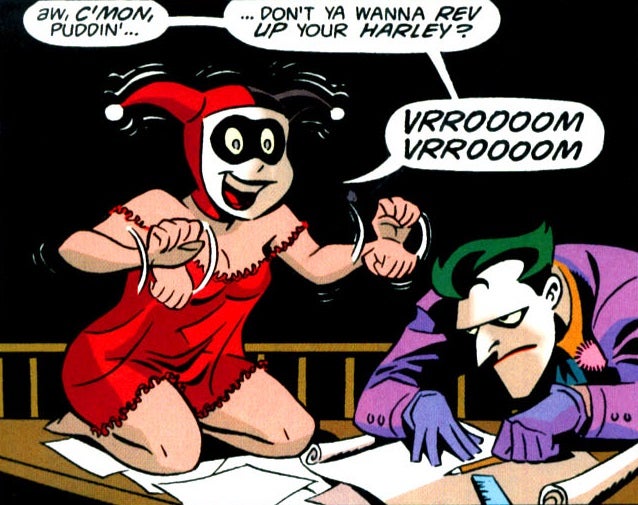 Harley would keep those same tights for the duration of Timm and Dini's 14-year run on DC cartoons, including Batman: The Animated Series, The New Batman Adventures, Justice League, and Justice League Unlimited. Even the Kids WB series The Batman (which was not set in the same universe/timeline) continued this tradition. For 17 years, Harley's only alternate costume was a red silk nightie.

It's clear from the concept art that Rocksteady wanted to do something different with Harley's outfit for Batman: Arkham Asylum, starting at first with the signature jester attire before transitioning to a nurse theme. For the first time since she was created, Harley had a new look–one that was almost unanimously embraced by fans, new and old.

Moving forward with the development of Arkham City, Rocksteady designed yet another unique costume for the character, this time ditching the nurse theme for the traditional red and black color scheme (with highlighted pigtails to match), and ditching the mallet for a candy-striped baseball bat.

Meanwhile, DC comics was busy planning a redesign of their own–a franchise-wide reboot known as The New 52. Just one month before Arkham City was released, DC launched the first issue of Suicide Squad (Volume 4), a comic featuring the first appearance of the brand-new Harley Quinn.

Harley's New 52 costume design bears some striking resemblances to Rocksteady's Arkham outfits–specifically the red and blue color scheme, which was first introduced in Arkham Asylum. This color scheme applies to her entire appearance, from her corset (from Arkham Asylum) to her highlights (from Arkham City).

DC apparently liked Harley's new two-toned hairstyle so much that they wrote it into her backstory. As a part of the character's New 52 origin, the Joker pushes her into an Ace Chemicals vat, permanently staining her hair and skin with the new signature look.

Since then, the artists at DC comics have done their best to continue the trend, featuring Harley in new costumes at every opportunity. New games and animated films such as Injustice: Gods Among Us and Batman: Assault on Arkham have also introduced unique designs for the character. The difference, however, is that while Rocksteady's redesign was derivative of the Bruce Timm design, all of these other designs have been derivative of the Rocksteady design.

Case in point: Margot Robbie's costume in the upcoming Suicide Squad film borrows more elements from Rocksteady's design than from any of the comic book source materials. Suicide Squad's version of Harley comes with pigtails nearly identical to the ones from Arkham City, but colored more similarly to Harley's New 52 design. This Harley also wields a baseball bat, like in Assault on Arkham–another element previously established in Arkham City. The only elements that appear specifically borrowed from the comics are Robbie's two-toned Daisy Dukes, whose red and blue color scheme appeared first in Arkham Asylum.

THAT'S POWER GIRL'S OUTFIT. YOU ARE A CLOWN.

TAKE IT OFF. IT DOESN'T EVEN FIT.

I have to admit: when Batman: Arkham Asylum first came out, I was disappointed by the loss of the classic costume. To me, Harley Quinn will always be as she was in Batman: The Animated Series, weirdly singing "Happy Anniversary" to the Joker from inside a giant pie. But by adding their own personal touch to Harley's design, Rocksteady managed to breathe new life into the character, escalating her from obscure cartoon character to live-action badass. After everything she's been through with Mr. J, I'd say she deserves the spotlight.