Invisigun Heroes makes an appearance at PAX South and is met with a very positive response.
by Douglas A. Skinner

The second annual PAX South took place January; and in the sea of gamers, developers, and game demos stood an indie game made by just three people.

Sombr Studio's first game, Invisigun Heroes is a retro-style multiplayer battle arena where everyone is invisible. Up to 4 players can battle it out as any one of the 8 different playable characters; each with their own special abilities. There is a total of 50 maps divided among the 5 planets that players can face off in. Five game modes have been revealed so far, and each mode has conditions that can be customized to bring even more variety to matches.

The game is on Kickstarter with over 800 supporters, with a $32,000 goal to reach by February 19th. The majority of the game was funded by the project's lead programmer, designer, and audio engineer, Shadi Muklashy.

After Sombr Studio's appearance at PAX South (and reading the amazing backstory on Sombr Studio's website), I was eager to get some more information about the upcoming Kickstarter that had a crowd at the booth throughout the event.

Douglas A. Skinner (DS): So tell us a little bit about the beginnings of Sombr Studios. What motivated this 3-man studio to create Invisigun Heroes? 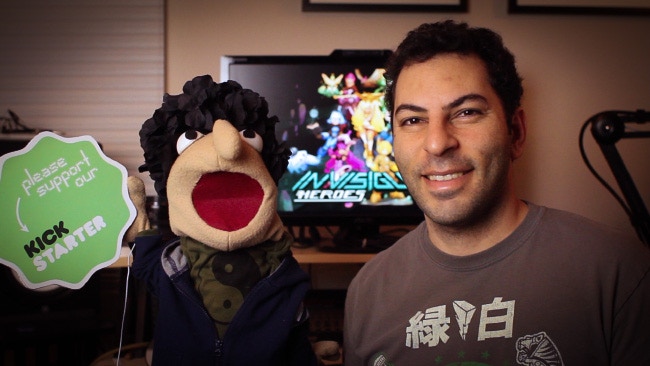 Shadi Muklashy (SM): In May of 2014, I had been working at Adhesive Games on the title Hawken for almost three years. Hawken was built in Unreal 3, and I began working on Invisigun Heroes as a side project to learn Unity because I was really attracted to its component-based design. When Adhesive Games closed up, I made the decision to pursue Invisigun full-time for as long as I could on my own finances, and hopefully see it through to a full release. The initial prototype was fun and promising, so I've been putting everything I have into it since then. I'm pretty competent in a bunch of different disciplines, so this helped tremendously on iterating quickly and keeping the team and costs low. That said, I worked with Ali Bavarian on the music since we've worked closely in the past on many game soundtracks, and Yujin Choo on the character concept art because I love her work.

DS: Where did the idea of Invisigun come from?

SM: Hawken's design was based around mechs with unique abilities, and my favorite mech by far was the Infiltrator. Its special mechanic was being able to cloak for a brief period and ambush opponents. Watching a battle with multiple infiltrators was always interesting to me, and this was one of the early inspirations for Invisigun Heroes. Aside from the core mechanic, the game is largely inspired by old and new couch-multiplayer games such as Bomberman and Towerfall, as well as the focus on fun mechanics and feel that Nintendo excels at.

DS: This was your first PAX South and the booth always had a crowd throughout the event. What did you learn at PAX South that could further help the development of the game?

SM: PAX South was a major relief for me! Coming into the event, I knew that the game was fun, but my instincts told me that it was based around the sort of mechanic that takes a little while to get used to. I certainly did not expect the immediate positive reaction to it that most people had -- especially on a noisy and crowded convention floor with everything competing for your attention. For a long time, I've been very worried about players' experiences with the first few minutes of the game, and PAX South basically alleviated this concern. People understood it right away, and were already calculating next-level strategies for their second round. My biggest takeaway from the experience is that keeping things very simple, readable, and responsive can teach the player how to play more than any hand-holding for a game in this genre.

DS: What is the biggest hurdle for the game currently?

SM: Without a doubt, proper online play support. This is the reason that the game needs one more year of development, since the rest of the foundation is very solid and just requires more asset production. Getting net play right is a difficult challenge, and when it's poorly implemented, it's the same as not having it at all. I did have an early protoype working online, but scrapped the subsystem in favor of using Unity's new networking libraries. Since the game is very deliberate and the victor is rarely decided by a few milliseconds of reaction time, I think it makes for a great candidate for a healthy online community.

We asked Shadi about the Invisigun Universe:

DS: How will you explain the motivations and backstory for these heroes?

SM: From the start, I intended the story and world of Invisigun to be closer to older 8-bit era setups, in the sense that they were so ridiculous. I vividly remember when I was little, staring at the profiles cycle on Street Fighter 2 arcade cabinets when I was out of quarters. I was also that kid who would read the entire instruction manual before playing the game. That said -- there's a hero profiles section in the game, and it covers their brief back stories and demos their special abilities. Some people at PAX South were actually really interested in the Invisigun universe, especially after seeing Yujin's character art, and hoped that it would be more fleshed out. This is really encouraging, and I'd love to provide little interesting snippets of the universe in between matches as long as it doesn't interrupt the flow of the game.

DS: Will there be a campaign? If there is a campaign, how will it tie into the multiplayer component?

SM: This may or may not be a stretch goal of the Kickstarter (hint hint). I've actually been trying to work out ideas for this for some time now, and I think early-alpha community involvement would go a long way to making a single-player mode very interesting. I'm a huge puzzle-game fan, so I do have some ideas centered around progressing from room to room through the Invisigun Academy, but it needs a lot of iteration and thought to create something fun around being invisible. That mechanic works wonderfully well for a multiplayer battle, but the trick is to make it feel just as fun when you're not playing against other humans.

All images are from Sombr Studio and Invisigun Heroes Kickstarter Page.

Just a common gamer that tours the gaming realms and travels to worlds near and far to give news and reviews to fellow video game lovers and enthusiasts.