Devil May Cry 5 Review: One Hell of a Good Time

Devil May Cry 5 is back, bringing with it the same hack-and-slash action that made it one of the best action franchises of all time.
by Joseph Ocasio

It's been over six years since we last saw Devil May Cry, or 11 years if you don't count Ninja Theory's DmC: Devil May Cry. After the latter's commercial failure, Capcom decided it was out with the new and in with the old.

Devil May Cry 5 returns to the series more playful roots, bringing with it the same hack-and-slash action that made the series so successful. It may not change the series' formula, but if it ain't broke, don't fix it.

That's not to say there isn't anything new in Devil May Cry 5, but the core mechanics are just as sharp as they've always been.

The game's story takes place over a few months and is partly told out of order. Without spoilers, the gist of it all is this: Dante is back, brought on by newcomer, V. Nero enters the picture, and it's the job of all three to take down a brand-new enemy, Urizen.

The story is easy to follow despite the fragmented story structure. And as with past games, Devil May Cry 5 may not have a deep or emotional narrative, but you should expect a heavy dose of action, sarcasm, and corny one-liners. 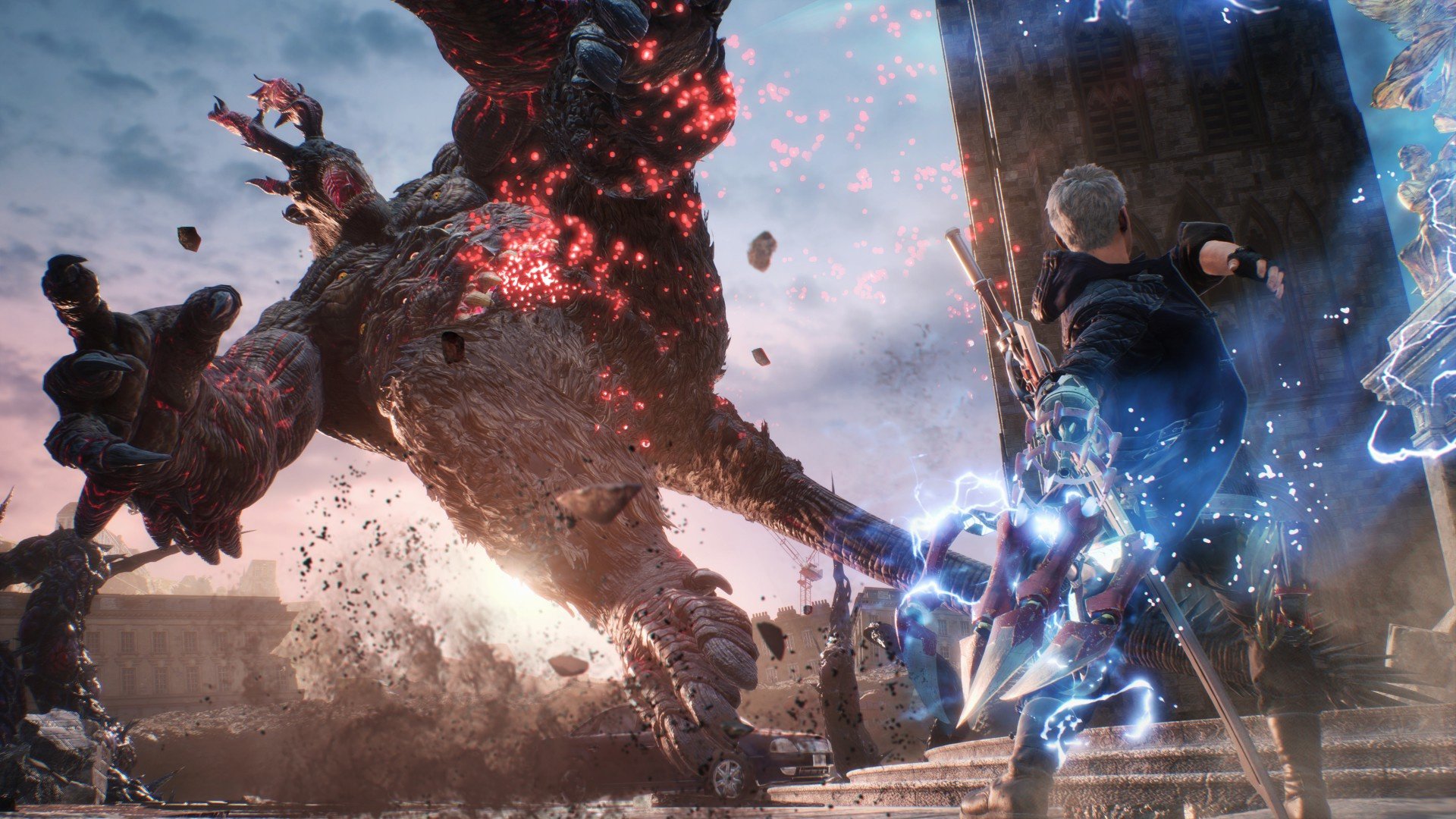 While the story remains as over-the-top as always, the characters have undergone a bit of maturity. Nero isn't as angsty as he once was; he's much cockier and more confident than we remember him in Devil May Cry 4.

Dante, meanwhile, is a much wiser and older man than he was in past games. He hasn't quite reached the, "I'm too old for this" schtick, as he's still just as insanely over-the-top as always, but it's clear he's learned a few tricks along the way.

New characters, like the gun-loving Nico and the gothic V, are instantly likable and make their marks on the series. Meanwhile, returning characters like Lady and Trish make for welcome returns.

There are even some nice bits of fanservice and callbacks for longtime fans.

Unlike other games with open, expansive worlds that encourage you to explore every inch of terrain, Devil May Cry 5 is 100% linear. You're always being pushed forward, with the only alternate paths leading to hidden collectibles and secret missions.

Even most of the backtracking from past games has been removed. Should you get lost, you can now hold down the left analog stick to get back on track, similar to Dead Space. After playing so many open-world games, it's quite refreshing to keep things narrow and focused.

As with past games, you'll spend your time hacking and slashing your way through 20 levels. Each character has a distinct combat style, but control in the same way.

Nero plays just as he did in DMC 4, but now he can use multiple prosthetic arms. There's a wide assortment to choose from, with each bringing different abilities and special attacks. One shocks enemies, another acts like a rocket and punch enemies, another slows down time around a foe, and much more.

Mixing and matching each arm is fun and brings new strategies to how you approach each combat encounter. The one thing to keep in mind is that if an enemy attacks you, you'll lose that arm. Luckily, you can hold multiple limbs at once, though you can't switch between them on the fly. You can also collect different arms during gameplay or buy them in the shop.

Dante returns and will feel comforting to play for fans who've been sticking around since the series began. He controls just as he did before, with his trademark sword and dual pistols. Along with them, he has access to metal gauntlets, twin buzzsaws that can become a motorcycle, and much more that won't be spoiled.

Dante can also change his fighting style on the fly by using the D-pad, with the same styles returning from DMC 3 and DMC 4.

Trickster is about dodging and teleporting around enemies; Gunslinger specializes in projectiles; Swordmaster is all about Melee strikes; and Royal Guard is about absorbing damage and sending it right back to your foes.

Each style changes how you approach enemies, allowing players to choose one that matches they're playstyle and experiment with ones they might not usually use. Like his weapons, you can upgrade them to access new moves.

Finally, there's V. Unlike Dante and Nero, V doesn't rely on weapons to fight. Instead, he relies on summoning a Demonic Bird named Griffin and a Panther-like demon called Shadow. However, V must be the one to deliver the finishing blow to enemies, so he can't just stand around and let his pals do all the work.

This approach to combat brings a much more methodical, much slower pace to battles, making V the least fun to play.

That's not to say there isn't any satisfaction to playing as V. There are enough flashing moves from his demon pals to keep things interesting. He just isn't as fast or exciting of a character to play as Dante or Nero. Luckily, V's missions aren't as frequent as Nero's or Dante's. 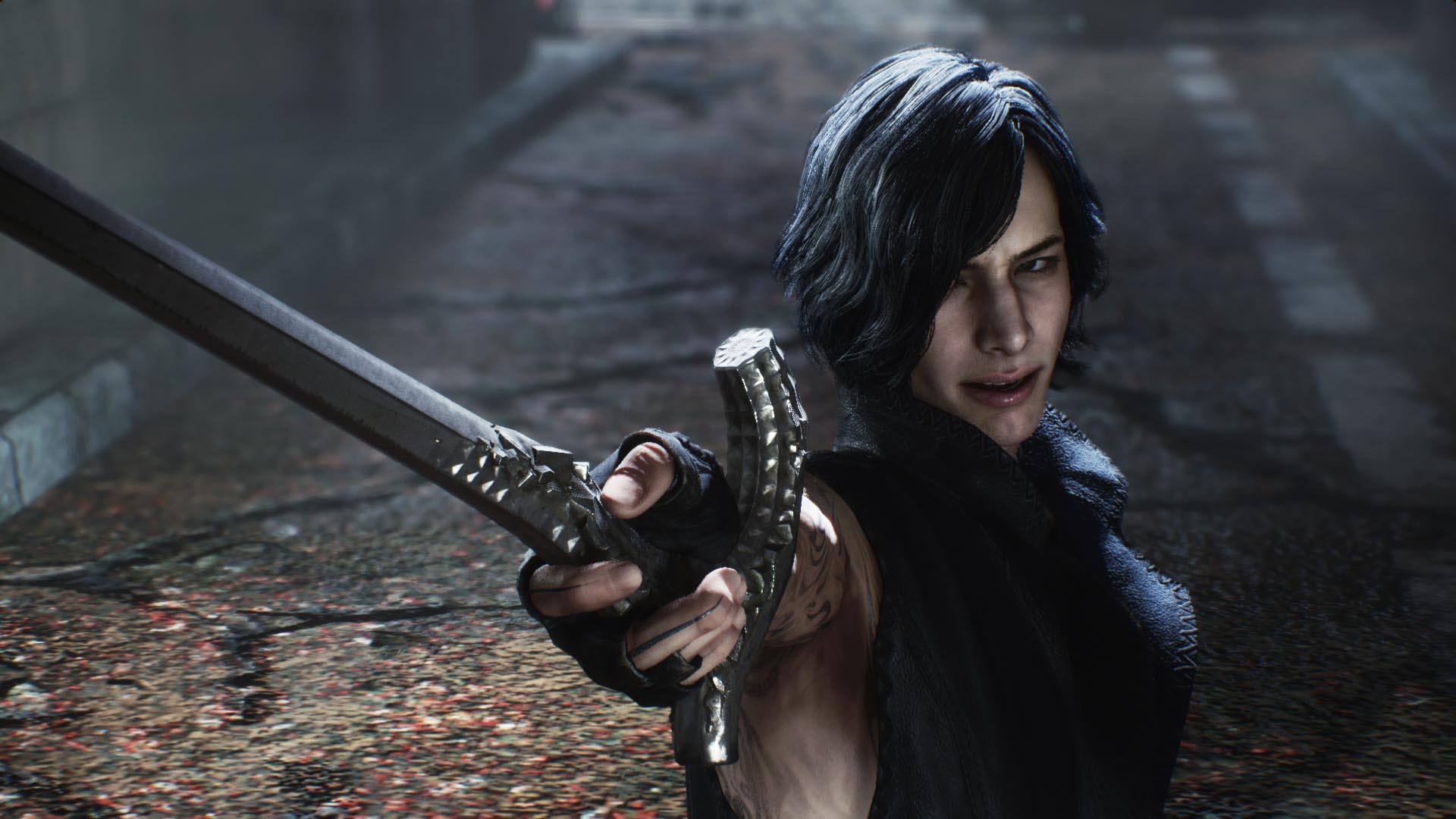 The various enemies the trio faces also help spice things up. Each creature feels distinct and has its own attacks to watch out for. They may all go down the same way, but they do enough to keep you on your toes. One downside is that the game is pretty easy, on the base difficulty.

Even when you're out of health, you'll be able to sacrifice some of the red orbs you collect to refill your health bar or use a Gold Orb.

You get plenty of the latter by exploring levels, and the game will give you one each day. Using these does take a few points off of your final score, so it does make for a good incentive to avoid using them unless it's necessary.

The only way to increase the difficulty is to beat the game. It makes sense so that you can get used to the various combat styles, but it would have been nice to allow veterans to kick it up to a higher difficulty right out of the gate.

It should also be mentioned that Devil May Cry 5 has microtransactions. You can spend real money to get red orbs that you can use to gain abilities. Save for one pricy special ability that's useless, though, the game always gives you plenty of red orbs to use, making them a pointless addition. 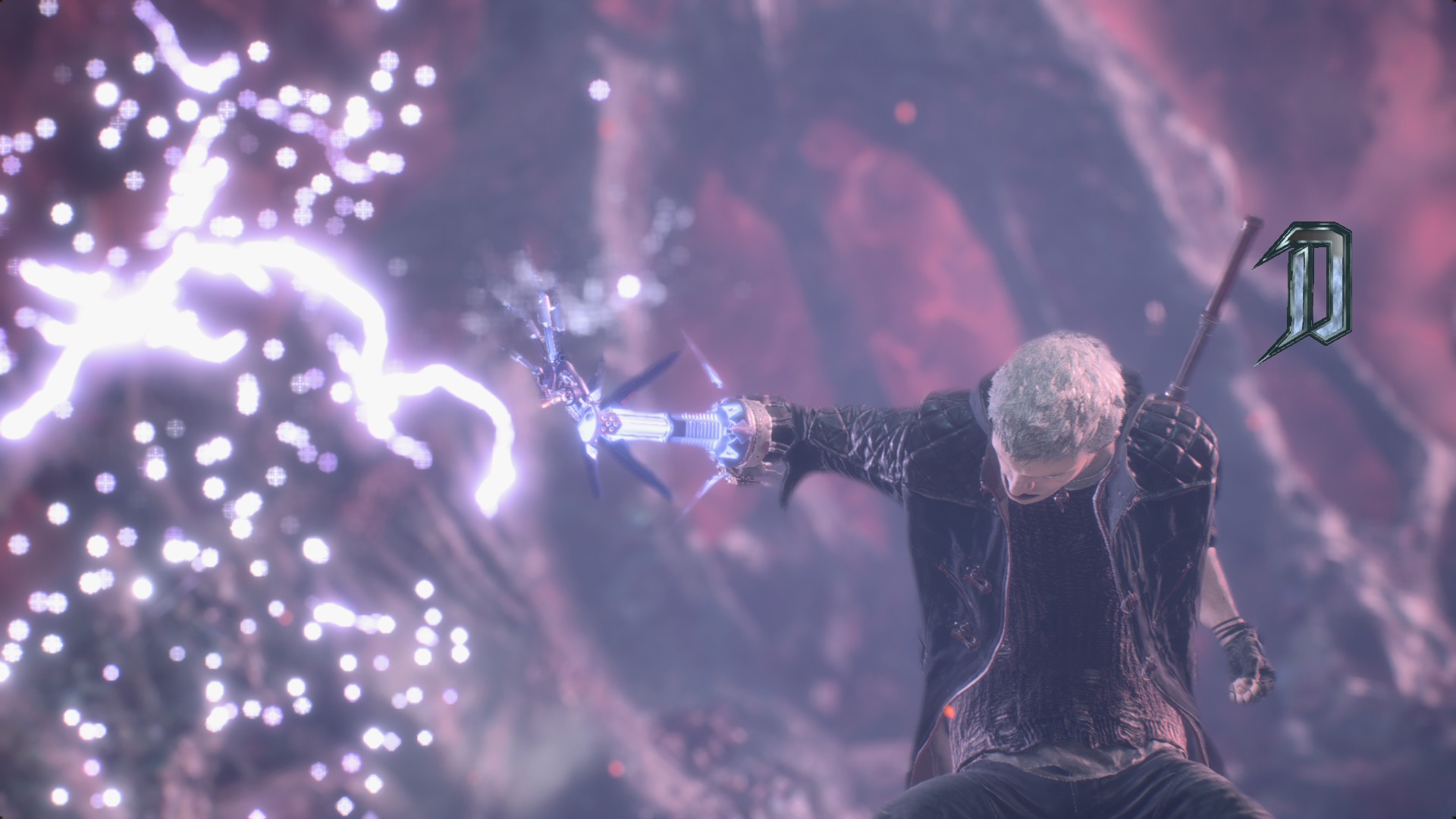 The combat in Devil May Cry 5 is easily the best in the series. The different playstyles are easy to grasp, and no one character plays precisely the same. Breaking up the combat for the three heroes are some light platforming sections. They're not as taxing as other games, but they do a great job of mixing things up.

Running on the RE engine, Devil May Cry 5 is one good-looking game. Creature designs are distinctly out of this world, and the bleak color pallets help sell the end-of-the-world vibe that it's presenting.

Character animation is top notch, with excellent stunt and motion capture bringing to life the insane action that's on display. If there's one major complaint, it's that the environments start to blend into one another after awhile.

On a base PS4, the game generally runs great, with only a few sections that suffer from notable slow down. The cutscenes tend to run unlocked, but mostly it's nothing too noticeable that'll ruin your immersion.

The music features the same great punk-rock that the series is known for and the voice actors do a great job in fleshing out their characters.

The bottom line is that Devil May Cry 5 is a great action game that does the series justice. It's been a long time coming, but it's great to have Dante and the gang back. Grab your gun and pull the devil trigger: DMC is back.

Our Rating
9
Devil May Cry 5 is back, bringing with it the same hack-and-slash action that made it one of the best action franchises of all time.
Reviewed On: Playstation 4
What Our Ratings Mean