Murkmire feels a bit more reserved than Summerset, but as a DLC that's expected -- and that doesn't mean this isn't well worth your time.
by David Jagneaux

The Elder Scrolls Online has quietly become one of the very best MMORPGs on the market. Earlier this year, the brand-new Summerset expansion introduced a new crafting tree and delivered one of the richest and most beautiful MMO zones in any game to date.

Ironically, the Black Marsh is essentially a polar opposite in the vast continent of Tamriel.

The Murkmire DLC brings players to the titular zone with all of its swamps, crumbling ruins, and reptilian scenery, nestled down in the far southeastern corner of the map. With it comes a brand new, very difficult group arena in the Blackrose Prison, a handful of delves, a new player home in the Lakemire Xanmeer Manor, and two new world bosses.

That's all on top of the typical assortment of quests, including a main quest line focused on the recovery of lost Argonian relics.

While it doesn’t have as much content as Summerset since it’s only a DLC pack and not a full-blown expansion, the new zone alone makes Murkmire a worthwhile purchase.

One of the biggest draws of ESO has always been exploration. There are plenty of merchants and questgivers peppered across the world to keep funneling you toward content and keep you busy, but it’s a remarkably playable game if you just turn off the HUD and go for a walk. These swamp lands hide a unique beauty that’s all their own.

Since I play an Argonian Warden, Murkmire was a special piece of DLC content for me. I felt out of place wandering the picturesque locales of Summerset and didn’t fit in with much of the base game’s content. Life as an Argonian is a life of exclusion and being labeled as an outsider. It was nice to see the tables turned for once. 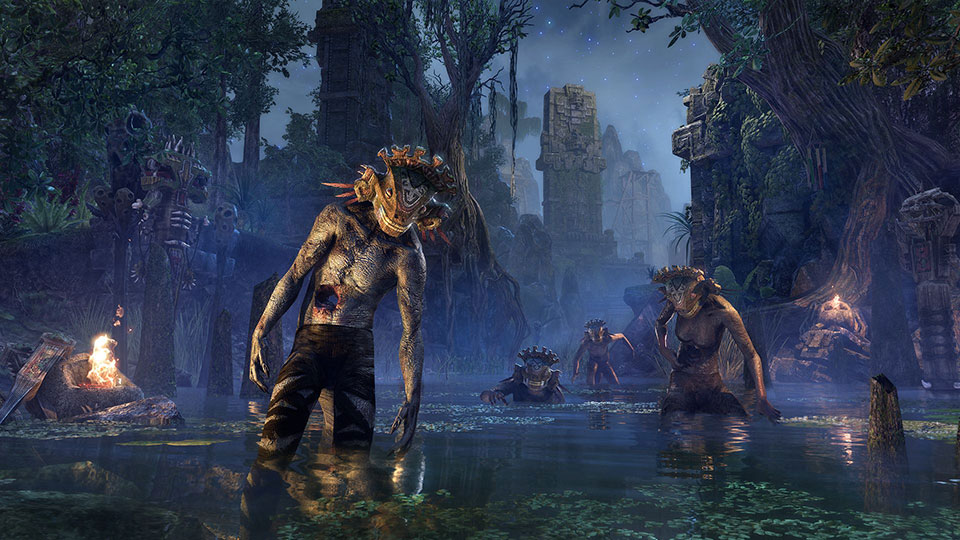 The main questline for Murkmire begins in the starting city of Lilmoth near the southeastern coastline of Murkmire. After speaking with Famia Mercius, you join the Cyrodilic Collections’ expedition to track down lost Argonian artifacts.

Before starting Murkmire, you can even complete some prologue quests back in Shadowfen (for free) to get in the mood for the storyline. Once it gets going in Murkmire itself, it’s all got a very “Indiana Jones gone bad” vibe as you quickly end up having to help rescue lost expedition members.

The set-piece moments are very well done and the quality of the writing and voice acting is right up there with the best of the rest of the game. This is one of the few MMOs that I usually don’t skip dialogue in because everything is voiced so well.

All told, the main quest for Murkmire is about seven individual quests long and can take a few hours to complete. After that, there are tons of side quests, repeatable daily quests, and the other world content to dig into. This isn’t a DLC that will keep you occupied for months on end; you can probably finish everything in this zone in a week or two depending on how often you play, but the addition of a new end-game focused Arena is a welcomed inclusion.

Bethesda’s attention to detail with their world building is second-to-none and Murkmire does a great job of continuing that legacy.

If you take the time to speak with NPCs and really dig into the dialogue and listen to what they have to say, you’ll pick up on variations in accents and phrases. For example, I noticed one female Argonian refer to her biological family as her “egg-family” and it just made me smile.

Tamriel has such a rich culture that it’s great to see it continuing to be expanded more and more. ESO feels like a living, breathing history book.

Coming off of the geographically massive expansion that was Summerset, Murkmire feels a bit more reserved. The content that is there is very well done, but it’s important to understand the difference between a large expansion release and a smaller DLC pack.

Along with Murkmire comes Update 20 as well, which does introduce some changes to the open PvP zone in Cyrodiil, holiday-themed furnishings, and improved home editing to round out the content offering.

The Murkmire DLC for The Elder Scrolls Online is available now for PC, Mac, Xbox One, and PlayStation 4 for free to all ESO Plus users or for 2,000 crowns in the in-game shop. A premium edition of the DLC costs 4,000 crowns, which also includes five 2-hour 50% boost crown experience scrolls, a swamp jelly non-combat pet, and a shellback warhorse mount.

Alternatively, Murkmire is also being given away for free as a daily login bonus -- this is the first time a paid DLC pack has been offered this way. All you have to do is log in to ESO at least 24 days in the month of November, which means if you haven’t logged in yet this month, you need to every day in order to earn it.

Murkmire is worth it, trust me.

[Note: This review is based off of the retail version of Murkmire after it launched on PC. The reviewer is an ESO Plus monthly subscriber and received the Murkmire DLC content for free as part of his subscription.]

David is the Games Editor at UploadVR, author of The Ultimate Roblox Book, and freelance writer with bylines at IGN, Forbes, PCGamer, Gamecrate, VICE, and many other places. It’s dangerous to go alone, so follow him on Twitter: @David_Jagneaux.