Nier: Automata, will it hold up to the original?

The upcoming game Nier Automata looks to be another interesting installment to the series. To put it lightly at least.
by Engela Snyman

When Nier was released in 2010 by Square Enix on PS3, it was considered by many to be an okay game -- good overall but nothing to write home about.

And yet despite the lukewarm reception, there were enough fans to support the game that we are being treated with a sequel.

Nier was an RPG and spin-off of the Drakengard universe. It told the story about a father who tries to find a cure for his daughter's sickness with the help of Grimoire Weiss, a talking, floating book with an attitude problem. The story was very emotional, with fun and interesting characters. The music was downright amazing, and the game offered some of the most creative boss fights we've seen in a while.

But even though the Nier never reached a large audience during its release (due to poor marketing and even worse graphics), it has steadily started to climb in popularity and has even earned a small cult following.

And now we're diving right back into that beautiful world with Square Enix and PlatinumGames (creators of Bayonetta) for its sequel, Nier Automata. 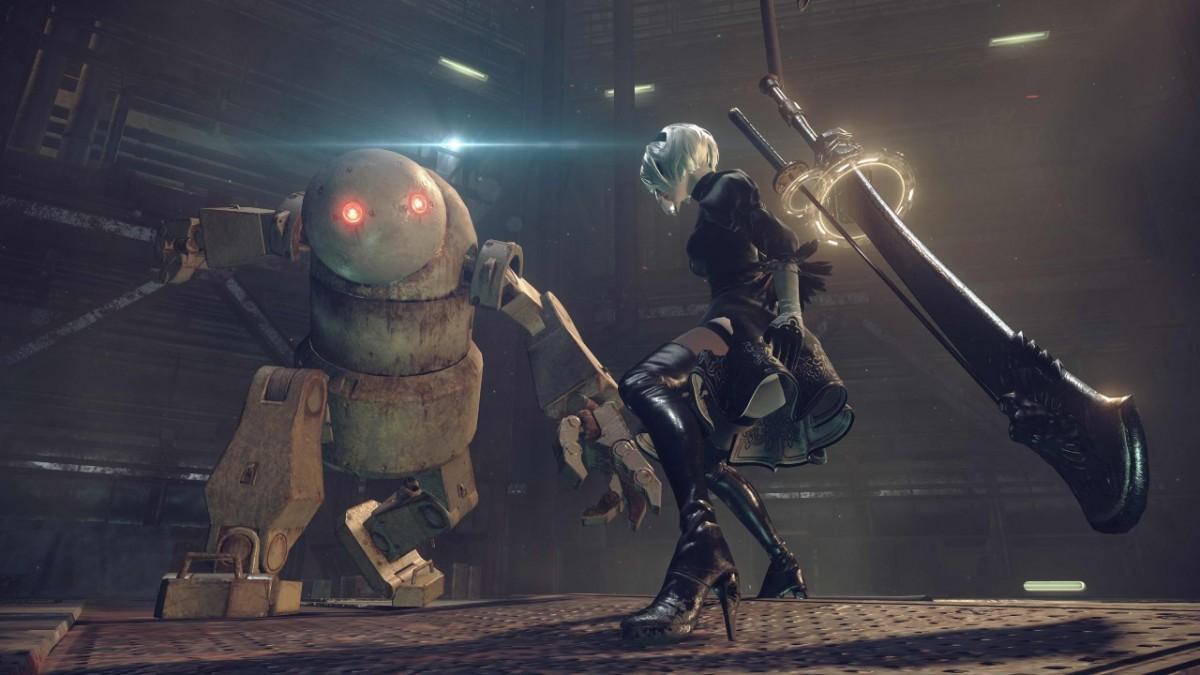 The new game is set an undetermined amount of time in the future, with new characters, new stories, and new villains. You will be playing an android female called YoRHa No.2 Model B (2B for short), who is sent down to earth with a few others to fight an invading force of robots. The new enemies resemble the original robots in the junkyard from Nier, so it is possible the story is progressing further on that point. One can only speculate.

2B looks like a badass anime character, which fits in well with the style and tone of the previous installment. With her huge sword, it promises to be just as action-packed as the first.

The developers did say the game will switch between different characters as the story progresses, and will keep its mixed bag of gameplay styles from the original. Sounds interesting so far, but how does it look?

The reveal trailer at E3 2015 captured the emotion and feel of the original Nier to near perfection. The large lumbering robots (or automatons if we go by the title) were very reminiscent of the junkyard enemies of the original. The style of fighting felt familiar, and the music was spot-on. So far it looks to be an excellent sequel to the original.

However, true to form for this series, the graphics look good. But like its predecessor, it doesn't seem to push the boundaries of the console, and rather comes across as a very pretty PS3 game. But in Nier, the story, characters, and music more than made up for the poor graphics. So we can only hope that this new game sticks to form there as well.

Another interesting thing to consider is some of the screenshots they released before E3. One showed 2B with a boar, which is also a nod toward the mount in Nier. But will this animal be a companion? It would be very interesting if they head down that route. The developers also promised to bring back some of the older characters, like the creepy Emil and kickass Kaine -- though they did stipulate that these will not be playable and will only be cameos. Still, they are keeping consistency in the story.

So, will it hold up?

So far the game looks very promising. It's still in development so even the graphics might get better before we get to lay our paws on it, and with PlatinumGames promising to add their unique flair we can certainly feel the potential building. But what made Nier so amazing was the story, characters and unique atmosphere it offered. The game itself was fun, but we kept playing because we wanted to see if the father could save his daughter. It really pulled on the heartstrings.

In Nier: Automata there isn't that unique connection or heart-warming story we can associate with, as of yet. It's more epic and battle-oriented, replacing a 'noble father' with a 'warrior android', and 'protecting your daughter' with 'taking back earth'.

However this might not be a bad thing, and they're hitting every single note to perfection so far so we might just get what we are hoping for. Moving the story in a completely different direction will give the series the chance to reach new players and give older players something fresh to look at. And the android angle could have some very heart warming story-lines.

They might head down the route of finding humanity in an android, perhaps even following a similar story of Blade Runner. Or perhaps the automatons (enemies) and androids (heroes) are more similar than we like to think, prompting us to feel sympathy for them like we did with the enemies in Nier. There's just enough mystery here to keep us guessing.

But it does leave a lot of questions for die-hard fans. Will there be more Grimoires? Will the story build on the original, or are we being treated with a brand new one? Is Liam O'Brian going to reprise his role as a sassy book?

Quite frankly, the possibility for this universe is truly endless. With some polish, it could very well become the next Drakengard. But only time will tell if this new game will (once again) inspire enough people to turn it into a full-blown series.