NBA Playgrounds: How to Get Gold Packs

Need to grind to get more of those gold packs in NBA Playgrounds? Here's how to do it quickly!
by Nick Lee

Every NBA Playgrounds player knows that in order to win any card packs you have to win a match -- but in order to grab those essential gold packs, you'll need to do a bit more work than that. Getting gold packs comes down to leveling and winning matches -- two tasks that don't have to be as difficult as they may seem.

By focusing on these two goals, you'll be able to unpack some gold in no time. So what level do you need and how exactly do you win tournaments? Let's hit the blackboard to find out.

Farming For Gold Packs in Tourneys in NBA Playgrounds

While farming in most games relates to XP, experience takes a back seat to opening new card packs in NBA Playgrounds. The true measure of success in the game will be grabbing those gold pack cards. And getting those means you'll have to grind through regular matches and gain as much XP as possible.

Once players reach level 50, every win thereafter will reward them with a gold pack. While this is a helpful piece of information, you might drive yourself crazy playing regular old matches that yield rewards you've seen before. So to skip the mundane match after match grind, you'll have to liven it up by playing tournaments -- or by employing following methods.

Tournaments are essential for both leveling and gaining gold, so competing in them will best prepare you for advancing in all aspects of the game. And like we've mentioned in our beginner's guide for NBA Playgrounds, you'll need a solid team that you've leveled up enough to be a dominant playing force.

When playing tournaments, you want a well-rounded team that can push you past multiple obstacles with a diversified set of gameplay styles. The reward for winning these tourneys gets you a gold pack while you level, so you want to do this as often as possible if you're trying to grind for them. 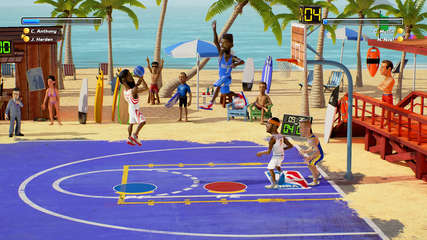 Currently the tourneys-to-time ratio isn't quite suited enough to seem like a viable option to keep replaying for gold packs -- so instead, you can utilize the online and exhibition game modes to tear through card packs. The added bonus in this method is that you'll gain XP. But more importantly, it's an easier route that can be replicated endlessly.

Winning games online grants the most XP and levels you up the fastest, but you obviously can't guarantee winning. Another unfortunate side effect of this method is the classic NBA 2K carry-over of your opponent rage quitting upon losing that plagues this game as well.

While this method itself can be more time-consuming and high-risk than exhibition mode, the rewards are plentiful if you can win.

With a little work, you can turn farming this mode into a science and win basically any match in under a minute, turning you into a true NBA farmer.

Like we outlined in our card farming guide for NBA Playgrounds, you'll want to pick your best players and match them up with a CPU player team with the lowest stats on your roster.

After the match starts, immediately go to the settings, select the map, and enter match options. Under "Match Finish," set score to 10 points. Another important aspect is to make sure the match with difficulty is on Rookie for an even faster win.

If you choose two players with a higher steal rating and a three-point rating, you can win matches even faster while perfecting your timing for both. Once the match is over, select "Replay" to skip most of the loading screens. Then rinse and repeat after until you're satisfied with the number of packs you have. While this won't guarantee any gold packs, it will level you high enough to start earning them regularly.

Farming for gold card packs is a relatively easy process, though it can be time consuming. Luckily for you, you now know all of the ways to farm for packs with the added bonus of leveling as you go. (And if you want to know the best players for NBA Playgrounds, we've got you covered there, too.)

As you hit the playground, remember to shoot for GameSkinny to get more NBA Playgrounds tips and tricks