What is Orcs Must Die! Unchained?

As an avid Orcs Must Die! fan, I was beaming with excitment at the announcement of Orcs Must Die! Unchained. My mind immediately filled with strategies of placing traps, arranging sentries, and awesome victory dances. As I watched videos and looked at screen shots, I started to wonder what this Unchained version was all about. Shall we dive in?

Is Orcs Must Die! Unchained a MOBA?

You will compete in games of 5v5, and before the match starts your team picks from a pool of heroes. Mobs will spawn and travel down pre-defined lanes like lemmings. The minions have one goal - travel down their lane, enter the enemy castle, and destroy the enemy rift.

Sounds a lot like League of Legends, Dota 2, and the countless other MOBAs that have sprung up over the last few years, right? 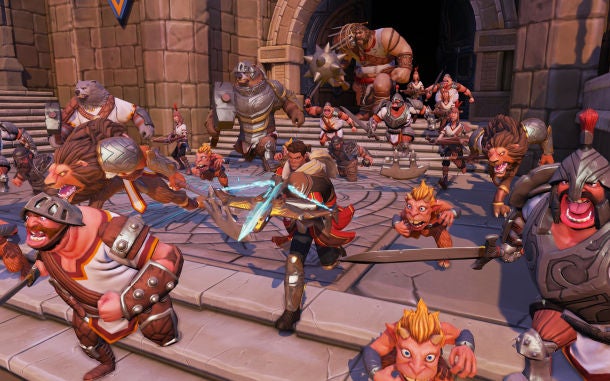 How is Orcs Must Die! Unchained Different?

One of the first things you may notice when you start playing is that you get to pick a "deck". No, this isn't a card battle game and Orcs Must Die! veterans will be familiar with this setup. In order to defend your rift, you set various traps around the map, and the traps you have access to are the ones you put in your deck! The minions you can spawn are decided on the cards in your deck as well.

Speaking of traps and minions, this is another huge difference you will find once you start playing. There are no towers to push, so your minions march their way across the map nearly unhindered. I say nearly because the traps do a great job thinning the enemy herd, but the stronger the minion the more resistant to the traps they are. How do you get stronger minions? You can upgrade your spawners which allow you send more powerful minions across the map, helping you take out the enemy rift.

Heroes of course play a huge role in the game. You don't move with mouse clicks and your abilities aren't bound to the Q, W, E, and R keys. Orcs Must Die! Unchained uses traditional W, A, S, and D movement. You aim with your mouse with left click being your primary attack and right-click activating a special move. This control scheme will feel familiar to Orcs Must Die! fans, and any FPS player out there will feel right at home. Heroes also have two other abilities bound to the Q and E key, helping mix up the gameplay and keeping things interesting.

Strategy is the key to success in any team based competitive game, and here its no different. The strategies start at hero and deck selection. Will you play a defensive hero, someone that roams around looking for a gank, or will you specialize in taking down minions while making yours better? What traps are in your deck, where will you place them and how will they combo with other players traps?

From there, when you first get into the game, which minion card will you select for your spawner? Will you spend your points to upgrade the first spawner or to unlock a second? If you focus on a second spawner, which will you upgrade first? It takes a team effort to unlock and upgrade so you want to coordinate.

The third strategy before the first wave of minions spawn is trap placement. Which ones will you put down? How will you place them? You want to kill as many minions as possible with your traps so placement and combos are key. A tar-pit to slow down enemies with arrows shooting out of the wall allows the arrow trap to trigger more often on the same minions.

So What Do We Call It?

The official term for the game is Fortress Siege, and this is a very apt title. By its nature, it is very much a Multiplayer Online Battle Arena - it's just not like a typical MOBA. It is two games of Orcs Must Die! being played against each other at the same time.

You can call it whatever you want. Me? I'm calling it fun, and I'm about to join another match. I'll see you on the fields of battle.