Almost every game has a villain. But very few have noteworthy villains; too many are evil for its own sake. The best villains are emotionally complex with their own motivations, pasts, and neuroses. It makes them relatable, flawed, and human -- even if they are not actually human. But sometimes these neuroses are more than just small problems; they are driving forces in a villain's life.

A psychological disorder can not be treated if it hasn't been diagnosed, so it's a good thing that resident P.h.D. ThatGamersAsylum* is here to assist. (What'd you think the Asylum stood for? Not just a family name.) Today I take a look at some villains that could've used my help before they destroyed *insert amount of resultant carnage*.

I know what you are thinking, "That is so true! She totally is a compulsive liar!" Oh, wait? That’s not what you’re thinking? Well, who cares if she is a robot? She can still be insane! I think... look this isn’t Rick & Morty folks. I’m not here to argue about the philosophy of AI psychology. All I know is that whoever programmed GLaDOS was a messed up son of a... Ohhh! Cake!

GLaDOS' compulsive lying starts at the beginning of Portal, "there’s cake," she says, "just keep doing all of these tests that may or may not lead to your death," she says. Well, I died a lot and never received any cake. What really pushes this over the edge, however, is that she lies even when it is obvious and no longer convenient or useful; she just can't stop. Even as you are funneled onto a conveyor belt that leads into a fiery inferno, GLaDOS insists that you are just fine and that the cake is totally not a lie. It’s just around the corner; it wasn’t. 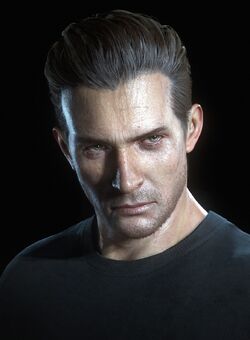 Rafe is a well-written character. He is flawed and multi-faceted. It is completely possible that a psychiatrist would see many things wrong with Rafe (Certainly nothing medication couldn’t fix, though.). The characteristics that make Rafe an adrenaline junkie are best exhibited by the lengths he is willing to go to acquire the treasure he has sought for so long. Rafe has wasted much of his inherited fortune, spent over a decade of his life, committed murder, and risked his own life all in pursuit of this treasure.

The last of these is of particular note because he does not need to be involved. Sure, it helps ensure control, but it also lets him get his hands dirty. His willingness for adventure, action, murder, and greed are all shown well when he kills the prison official early in the game.

In Pokemon Sun and Moon, it is said that Lusamine was a kind, affectionate, (and still hot) mom when her children were young. It is only when her husband disappeared while researching the very creatures that she is now obsessed with that she began to become the madwoman we know and love today.

Lusamine seems to truly believe that she was a great mother and that her children betrayed her without reason. She also thinks she can save Pokemon while allowing the Ultra Beasts to wreak havoc upon the world. Lusamine feels a need to save and protect the Ultra Beasts when the only known threat to them is her. In short, Lusamine suffers from delusions and struggles to adequately grasp reality and this would fit psychosis.

Psychosis is,” characterized by radical changes in personality, impaired functioning, and a distorted or nonexistent sense of objective reality.”

Psychosis, however, is a symptom. Since her psychosis seems to be onset from extreme grief it seems clear she suffers from Major Depressive Disorder with features of psychosis. (You didn’t really think we’d get through an article about psychological disorders without talking about depression, did you?)

I know what you are thinking (yes, this schtick again), "Oh! That guy is a major asshole... and isn’t PTSD for soldiers?" Yes, he is. And no, it’s for anyone that has witnessed or experienced something traumatic, especially death. Seymour’s PTSD is specifically rooted in his childhood.

Being a half human, half-guado, he was meant to be seen as a coming together of the two species but was eventually despised as an abomination by both. As such, he and his human mother were exiled. By the time he was 10, his mother was terminally ill and decided to sacrifice herself to become a fayth in order for him to be able to use her as a summon to kill Sin, a creature that reincarnates and destroys civilization and whose actions are seen as a divine punishment for, well, sin.

His mother’s sacrifice really screwed with him, as one can imagine. It left him alone in the world and he became distant, eventually developing deeply held nihilistic worldviews. This ultimately lead to him believing that the only way to save people from suffering was to kill them. He really was a sweet boy. I swear. One symptom of PTSD sums it up best:

“Persistent and exaggerated negative beliefs or expectations about oneself, others, or the world.”

Remember children, raise your kids right or they will become an undying monster that’s an unbelievable pain in the sides of JRPG fans worldwide.

"We all make choices. But in the end, our choices make us."

Andrew Ryan has similarities to many of the villains on this list. He grew up in Russia as a child and witnessed the 1917 Russian Revolution at the young age of 6. This shaped his world views, namely, that the greatest things in the world were accomplished by great people that were unfettered by government, regulation, and “parasites,” or those reliant upon the great successful ones. This is not altogether unlike Seymour’s youth.

Ryan also seems to share aspects of Lusamine’s psychosis. He constantly fears Rapture being taken over by the “parasites” while continually undermining his own ideals every step of the way. He goes to great lengths to take over private businesses to overthrow a smuggling ring, something that is in direct opposition to his creed. Certainly most damning, both morally and philosophically, is when he follows Su Chong’s advice and laces plasmids such that their users would become vulnerable to mental persuasion via pheromones.

Ryan also categorically shows disregard for the well-being of others. His whole ideology is fixated on “parasites” potentially sucking on the teet of the wealthy and affluent. But it seems to be pushed to the extremes, such that there are no protections for those who cannot defend themselves. The lack of moral restraints on scientists, which ultimately leads to the many scientific abominations you fight in Bioshock, is exceptionally concerning. Extremist ideology merges with politics in an interesting way.

Is this used to signify scope, or just from a scrapped ME:A article? Yes.

What makes Ryan so interesting within the context of this article is that he begs for a greater, relevant debate to be had. Where do philosophy and personality end and psychological disorder begin? Andrew Ryan’s guiding philosophy may be unusually un-altruistic, but does holding such views make you a sociopath who lacks the ability to empathize with others? Just because your ideology grows from a different place, a different context, does it make it inherently inferior?

Could an ideology -- that was developed or nurtured in psychosis -- be relevant? At what point can you call Ryan’s arguments poppycock and insist that his are the ramblings of a mad man that needs not be in the pulpit, but rather in the asylum? Does evil necessarily equate to some underlying disorder?

You can see a similar argument take place in modern medicine. The DSM-V allows what many consider to be normal grief to be diagnosed as clinical depression within a short amount of time. This can ultimately allow for the over medicating of patients that do not need medicine. Where is the line drawn between the normal and the obtuse? And when the obtuse is verified, when do we decide that it should be medicated away?

When does a “hard ass stubborn old mule” turn out to be a lack of empathy in need of diagnosis? Even Andrew Ryan was pushed to the edge and forced to use his power as "the man" to interfere with the privacy of others to act for the perceived greater good. When does government do the same to help the mentally estranged that need help? When does it become necessary? When does it become obtrusive? There are no easy answers.

Ah! The whole gang back together again. Makes me nostalgic.

Now to lighten the mood after confronting you with the crushing possibility of an over-medicated country! And what’s better for winding down than Borderlands? Everybody in Borderlands is crazy, whether it be a good guy, a bad lady, or any combination of the two. (In Borderlands, you just might see a combination of all four.) And you didn’t need me to tell you that!

Death is only the icing on top of the sweet cake that is the act of killing people for all of these sickos. Psychos are well, psycho. “Strip the flesh, salt the wound! Aha! Ahaha!” I mean, who fights over meaningless loot and weapons in a society where death means that you are instantly cloned and revitalized? This is supposed to be a utopia and all of you are fighting one another to obtain guns which you then us to kill each other to get more guns? And on the armpit of hell of all places? You’ve got to be kidding me. I now see why Dr.Zed is so flippant about practicing medicine. What’s any of it matter? Moxxi, hit me with the strongest spirits you’ve got!

This is supposed to be a utopia and all of you are fighting one another to obtain guns which you then use to kill each other to get more guns? And on the armpit of hell of all places? You’ve got to be kidding me. I now see why Dr.Zed is so flippant about practicing medicine. What’s any of it matter? Moxxi, hit me with the strongest spirits you’ve got!

That's it for video game villains who have actual diagnosable psychological issues. But, if there are some obvious ones I have missed, let me know in the comments below.

*Not an ACTUAL doctor. Obviously.

All diagnostic quotes are from the DSM-V unless otherwise noted.

Graduated from Full-Sail with a BS in Game Design (Speaking of BS, how about that student loan debt, eh?).