Favorites of the GameCube - Luigi's Mansion

A classic game reviewed based on story, graphics, and gameplay.
by James Kelly

Luigi's Mansion, a GameCube classic. The graphics in it were groundbreaking for the initial releases in 2001 and 2002. Sure, it had its blocky and polygon-filled moments, but the main aspect of the game, such as Luigi himself and the recurring ghosts, were amazingly smooth and shiny.

Now, I have to be completely honest. When Luigi's Mansion first was released I was just a young kid. I played it, but I did not complete it at the time. I watched my brother complete it. Saying this, it's obvious I did not get the full experience back when it was groundbreaking and new. I did, however, finish it in my teen years. This was a very fun and for the most part nostalgic experience for me.

Without giving any spoilers, I can safely say this game is worth a try. Heck, it's worth a whole playthrough. If you do not like this game, I would honestly be surprised. For this reason, I will have to rate this game a 7/10. Why only a 7? Well, let's get into the nitty gritty details.

The game is dark, yes, that's fine. It's actually a nice aspect of the game in which you have to complete rooms fully in order to turn on the lights to that room. But it gets annoying having to run through hallways and rooms trying to get somewhere with ghosts popping out because it's dark.

Another repetitive point to this game would have to be the fact which you need to basically be on a perfect angle to defeat a ghost. Let me explain in more detail.

Once inside of the mansion for a bit, Luigi gains access to a 'Poltergust 3000'. Once given this, Luigi can suck up the ghost into this vacuum like device. Certain ghosts, called 'Portrait Ghosts' can be saved in the Poltergust 3000 until Luigi releases them back into their painting from which they escaped. The small and common ghosts stay in the Poltergust 3000. 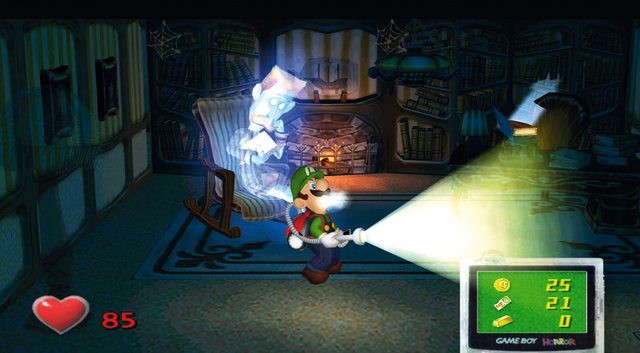 How does a ghost become captured, you might ask? Well, ghosts start with a certain amount of hit points / health / whatever you may call it. The amount depends on how common they are.  Portrait Ghosts or bosses may have over 100 hitpoints, while common ghosts may just have 20 or even 10. When Luigi shines a light on a ghost, the amount is revealed. He may then suck up the ghosts with his Poltergust 3000 and once the amount reaches zero, the ghost is defeated and captured inside the device. It's quite simple how to work the device and controls. You just point and suck. Keeping the device on them, the number goes down and they struggle to get away. Sometimes you have to fight the ghost if they are tough by struggling to work against his escape route by stepping the other direction while still using your Poltergust 3000. 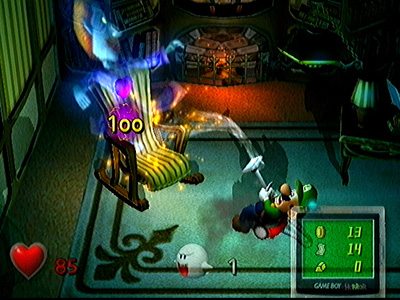 Now, by perfect angle I mean you need to hit the ghost with the vacuum direction and struggle to not let him escape. It can get really upsetting when there is a boss ghost with 100 health and you can only get 5 off every time he appears because he fights and runs way too quickly and with too much strength.

Aside from the amazing storyline once you get into the mansion, the opening scene and story is a little confusing. Luigi has won a free mansion from a contest! Okay, but as soon as Luigi saw the haunted aspects of this mansion, would he not be sensible and turn away forever? I understand there needs to be a horror aspect of the game and reason for it to continue, but it should be a little more believable. Of course, Luigi is told of a main reason he should stay, but not until after he sees how ridiculously spooky this mansion is.

For me specifically, I would have to say this game gave me a horror experience, without even having to be completely scared out of my mind. I don't like horror games, but this game is one I could play over and over again. Now, I may be afraid of horror games, but that doesn't mean I don't like the experience they give you. I just don't like being scared. That is why Luigi's Mansion is fun for me. It's not all about getting scared by the ghosts or anything, it is just about the experience of being in a creepy mansion that is mostly all dark and roaming the halls just waiting for a ghost to pop out.

I am a very story-driven person. I love games for the stories, which is why Nintendo games tend to get to me in a good way. But this game's opening really had me shrugging and doubting. But, as mentioned before, this game is overall one of my favorite games on the GameCube.

Our Rating
7
A classic game reviewed based on story, graphics, and gameplay.