A solid hack and slash deserving of your attention, no matter how oblivious you are to the Marvel universe.
by Gordon Siu

You may wonder why I decided to choose to do my very first review on Marvel Future Fight. Is it amazingly good so as to be the mobile equivalent of The Witcher 3? (Which I adore, by the way) Or is it just a nice and simple mobile game that is easy for a newcomer like me to write about? Hmm...I wonder...

First things first, Future Fight is a mobile hack-and-slash (think "My First Diablo"), which immediately places it in a swamp of competition with the likes of Dungeon Hunter, Eternity Warriors, Zenonia etc. So why would you choose Future Fight above all the others especially if, like me, you've never read a Marvel comic in your life?

At a glance, visually, Future Fight looks like a competent superhero game, with vibrant, bold colours, without looking too childish (Marvel Mighty Heroes being an example). Models and textures also do look sharp and detailed for a mobile game.

It's a shame then, that there is very little in the way of level variety, which themselves are completely linear. And though this is the norm for most mobile games, destructible environments being completely non-existent does hamper some of the combat's punch in Future Fight. If you've played the Marvel Heroes MMO (which is akin to Future Fight's bigger brother), you'll find that you can throw cars and other objects, aside from destroying lightposts and trashcans in your path. Even this, which I would consider very basic environental damage present in many games, would make combat look and feel much more satisfying. The only destructible objects you'll find are barrels that drop coins, gear components and power ups.

However, one aspect that separates Future Fight from other games of its type, is the gameplay. For instance, there is no mana pool to worry about, and also no potions to stockpile either. This seems to be the case to make the combat more accessible and fast paced. Though this is true in the earlier missions, when you start fighting tougher bosses and enemies, you'll need to become adept at kiting enemies, as there is no reliable way to heal your characters aside from the occasional lucky health drop from the aforementioned destructible barrels, which does slow things down considerably.

This is one of the reasons why I personally would prefer a more reliable way to heal your character, though I do understand that people may enjoy the difficulty this brings. 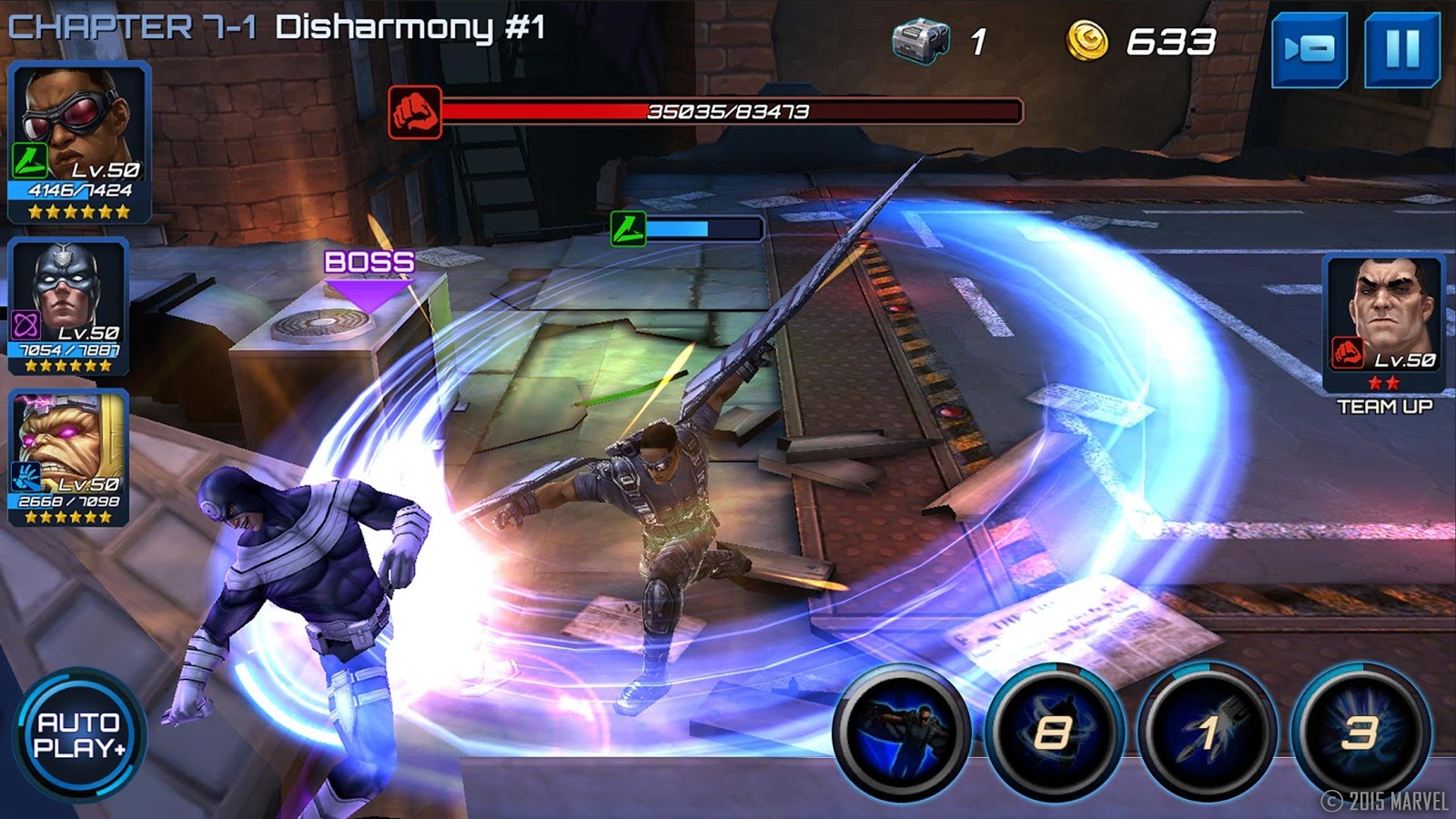 No loot ≠ no farming

In other hack and slash games, progression comes in the form of collecting sweet, sweet loot, which unfortunately isn't present in Future Fight. Instead of collecting gear to bolster your superhero's stats, this is done by farming components and currency, which are then used to upgrade your existing gear.

There is an element of randomness though, as upgrading gear unlocks a random stat bonus that is augmented to it. This presents a problem in that if you roll a useless stat bonus, such as energy damage on a hero that only does physical damage, there is no way to remove and reroll another, although the developers have stated that this will be coming in a later update.

While the absence of loot is sorely missed, don't think there isn't any reason to farm.

While the absence of loot is sorely missed, don't think there isn't any reason to farm. If anything, you'll be overwhelmed by the amount of farming to be had in Future Fight. Instead, you will be mostly farming for items known as "biometrics". Firstly, these will be used to unlock their corresponding hero and after that, they are used to rank up corresponding characters (up to rank 6) while unlocking new abilities and boosting stats.

A lot of people will despise the fact that each hero's 4th skill (ultimate ability) is only unlocked at the final rank, which believe me, will take a ridiculous number of biometrics. To play devil's advocate however, it can be argued that this provides motivation for the most iron-willed of players to keep farming biometrics for the game's 37-strong hero roster. It all comes down to personal preference, some people may find much more enjoyment in farming for entirely new characters as opposed to a new piece of equipment that gives a marginal stat increase, I personally side with the former.

A free-to-play model that isn't infuriating!

The whole discussion of biometrics shifts us towards the murky waters of Future Fight's payment model, which for all free-to-play mobile games, I think deserve their own section in reviews. There is a microtransaction system in place where biometrics can be bought with real money through hero chests and using the premium currency "crystals." But I'll maintain that having played countless free to play mobile games, Future Fight is actually one of the more generous ones out there.

The only items that are obtainable through crystals exclusively are alternative uniforms, which are simply cosmetic skins that provide a very slight stat boost.

This is largely because biometrics are obtainable through regular play, while other games of this genre would otherwise lock out a half a shop's worth of gear as premium items that are impossible to obtain without premium currency. So, in my personal opinion, buying biometrics is not too different from unlocking weapons in Battlefield or Call of Duty early. The only items that are obtainable through crystals exclusively are alternate uniforms, which are simply cosmetic skins that provide a very slight stat boost (I stress the word "very"). Finally, unlike other games, crystals can be earned for free by playing the PVP arena battles and occasionally gifted to you by the developers. 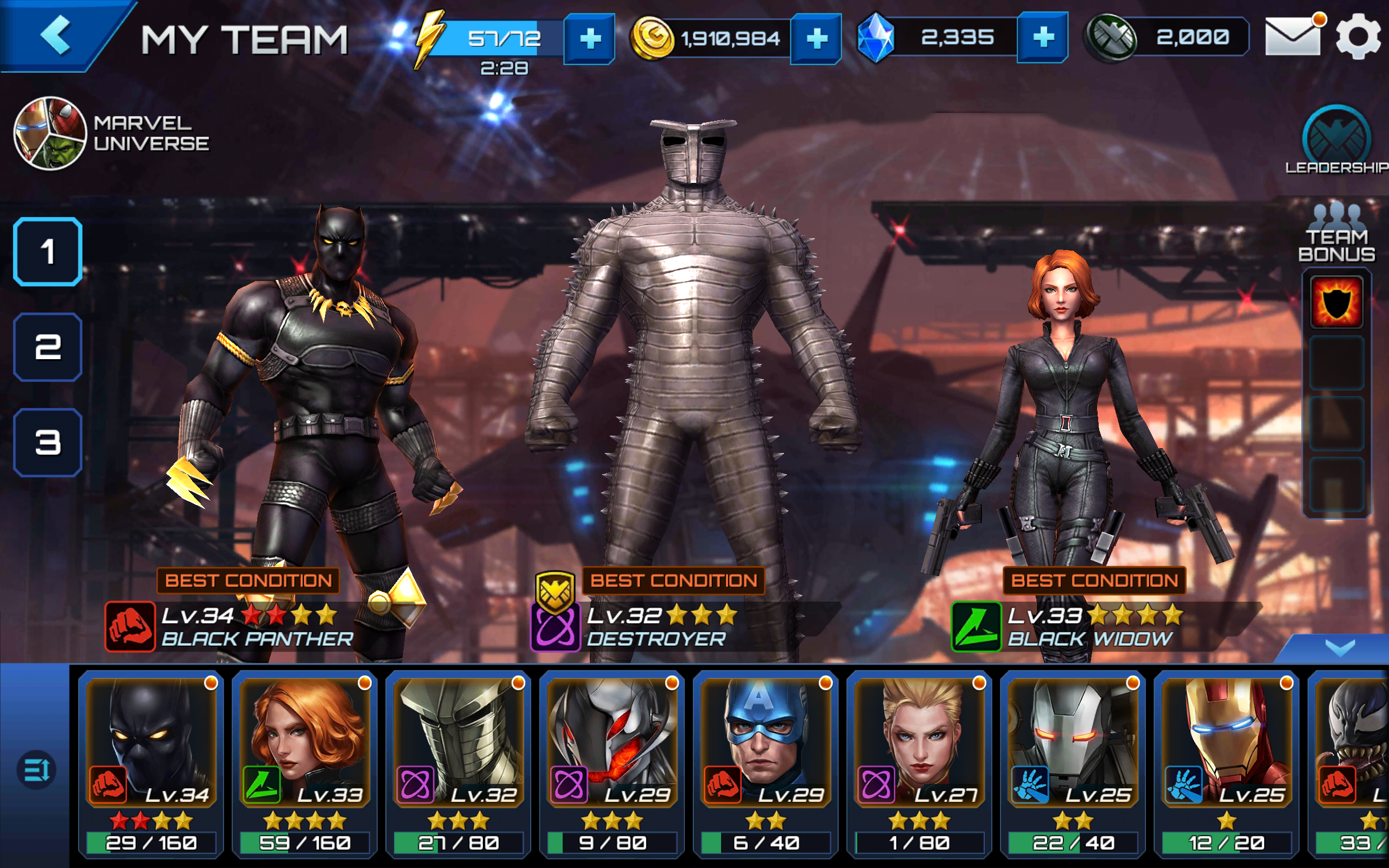 The Stamina/Energy system that has plagued 99% of free to play games also makes its return. While I definitely don't condone this being in any game, again, within the context of mobile games, Netmarble almost look like saints compared to other companies that I won't name. Not only have there been frequent events which reduce mission energy requirements, but as a rough estimate, you can recieve almost 3 full refills worth of energy just from daily gifts and completing daily objectives, a lot more mileage than most other mobile games I've tried in the past.

All in all, worth a look.

To sum up, Future Fight is not only a game for die-hard Marvel fans, but one I would encourage all hack and slash fans to give a chance. While it may lack depth in certain areas, it's fun, looks great, and easy to pick up and play while having a bearable free to play model, not something I would say for most of Future Fight's competition.

Our Rating
7
A solid hack and slash deserving of your attention, no matter how oblivious you are to the Marvel universe.
Reviewed On: Android
What Our Ratings Mean