Craziest Things That Have Happened Because of Pokémon GO

Pokémon aren't the only thing making this app an adventure -- just see the stuff people have already got themselves into!
by Jack Einhorn (skullkid)

Pokémon GO came out just two days ago, and if you’ve been anywhere on the internet then you probably already know what a phenomenon it is. If you don’t yet, it’s an app for iOS and Android that takes your GPS location and makes you into a Pokémon trainer. You view an overhead map of your actual location and have to physically walk around to catch Pokémon. When you encounter them, they show up on your phone through camera -- appearing to be sitting on the ground in front of you. However, with augmented reality like this, forcing people to walk around in real life and stare at their phones -- there are bound to be some weird situations you can find yourself in. With the instantly booming popularity of the game, that likelihood is all the more increased. These are just a few of the stories that have come out of the game so far, ranging from whacky to unfortunate -- to just plain scary.

1. Man makes viral post about catching a Pidgey while wife is in labor.

Our first story is a cute one -- while a husband was waiting for his wife to get a C-section (an apparently boring and extremely long wait) he booted up Pokémon GO, encountered a Pidgey, screenshotted it, and then caught it. 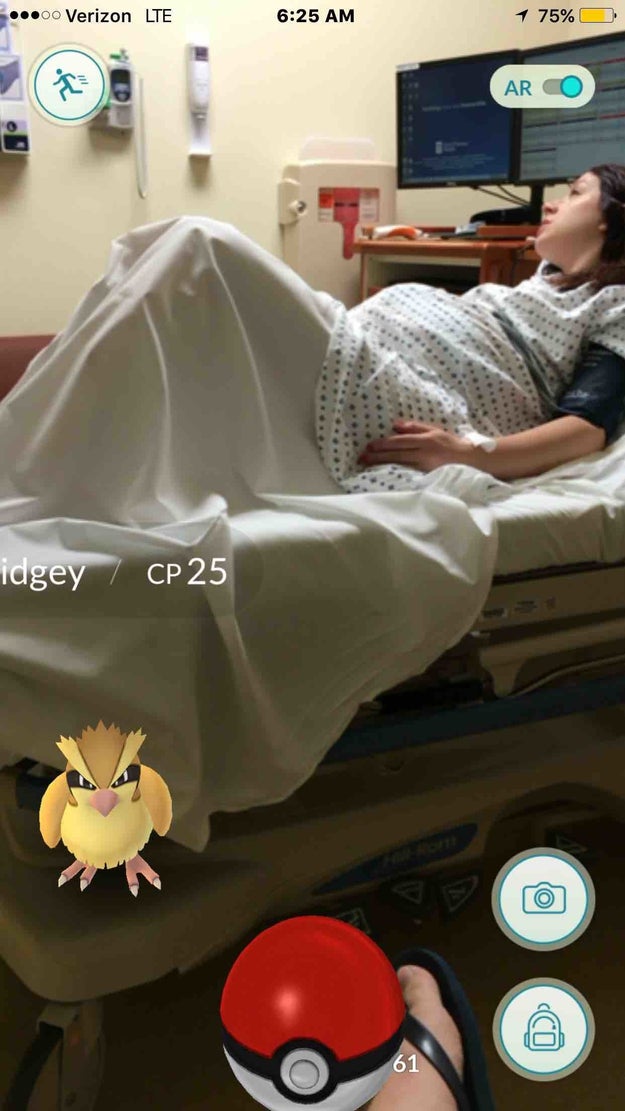 Posting the picture to Imgur, Jonathan Theriot (the budding Pokémon trainer in question) stirred up quite a bit of viral activity. Despite getting some flak online for playing a game while his wife Jessica was in labor, Theriot clarified that she had just laughed it off when he showed her the Pidgey. Their baby girl, Ireland Sage Theriot, was born healthy and safe.

Redditor “scarstruck4” posted his story to /r/tifu, in which he begins playing the game at his workplace, a banking/IT company. While workers are allowed to use their phones while on the premises, using the camera function is strictly prohibited due to working with sensitive client data. After opening the game, “scarstruck4” encountered a wild Zubat and without thinking began throwing Pokéballs at it, holding his phone up at eye-level. Before he could even react, a security official began questioning him and then confiscated his phone. His phone is now being sent abroad to undergo a thorough search, and this man is at risk of being blacklisted from the IT industry. Be careful where you Pokémon hunt, folks!

3. Someone found a real dead body while out playing the game!

Shayla Wiggins, a Wisconsin resident, began walking on the waterfront of the Wind River in the hopes of finding water-type Pokémon. Instead, she encountered a real-life dead body! Wiggins called 911 to report her findings, and the Fremont County Sheriff’s Department has confirmed that indeed a dead body has been found.

4. Even law enforcement has weighed in on the overnight phenomenon!

Australian police, the Northern Territory Police, Fire and Emergency Services, posted to Facebook alerting Pokémon trainers that they needn’t actually enter the police station in order to receive in-game benefits. The police station functions as a “Pokéstop,” a place where players can restock on Pokéballs and other items.

In general, it’s probably best to keep your Pokémon hunting incident-free, and so following the advice of the above police post is certainly advised -- always pay attention to your surroundings, keep your head up, and don’t venture somewhere you wouldn’t normally go otherwise. Happy hunting!