Psyonix's rocket-powered battle cars soccer hybrid is an insanely fun and surprisingly deep sports game, and is my game of the year.
by Joe DeClara

When first jumping into a match of Rocket League, it feels like something of a joke. Driving around a soccer pitch and awkwardly bumping your rocket-powered car into the giant ball or other players makes for a hilarious spectacle at first. But once you start double-jumping, barrel-rolling, and power-sliding into amazing trick shots, this car-battler/soccer hybrid opens up to be a deep sports game with electric moment-to-moment action and rewarding team-based gameplay.

Every moment counts in a match of Rocket League.

Waiting just half a second longer to somersault into a shot can make the difference between scoring a goal and sending the ball flying into your own goal territory. This low-gravity ball's trajectory can be manipulated by players through executions of front flips, bicycle kicks, or even simple nudges paired with precise point-of-contact calculations.

The skill behind coupling these double-jump nuances with rocket boosts and power slides is easy to learn and a challenge to master.

Knowing when and where to pursue these shots is half the battle. Though the thrill of gunning for every possible opening can be overpowering, Rocket League is best played with team-based strategy in mind. Far more rewarding than my solo breakaways are the instances my teammates became momentarily coordinated and would set each other up with masterful plays.

But the game is not unapproachable to newcomers. Jumping into Rocket League for the first time comes with silly and inconsequential fun as you slowly learn the deep mechanics through experimentation. And whether you’re a first-timer or a seasoned player, the explosive glory of every goal never gets old.

A match in Rocket League plays so much like soccer that it hardly needs explaining.

Players are dropped into five-minute matches and must supersede their opponents in goals scored. Enclosed in an arena-sized cage, the pitch is littered with energy silos of boost energy. Picking up this glowing rocket fuel is imperative to keeping up with the action, and can make collisions with other cars lethal at top speed. Points of conversion between the ground and walls are rounded, allowing for cars to defy gravity and drive up walls. While adding a dynamic to traversing the playing field and lining up shots, this also levitates some of the chaos the more populated matches tend to create.

Matches can consist of up to four cars per team, but I found two or three players to be a sweet spot.

Finding any form of match in Rocket League is thankfully swift and painless. After forty hours of playing, I averaged fifteen to twenty-second wait times in matchmaking, the longest wait taking no longer than ninety seconds. Any time a player would pop out of a game, a replacement would be dropped in seamlessly within a few seconds. I hardly would have noticed swaps taking place if it hadn’t been for the notifications. The servers, however, can be inconsistent, often resulting in some nasty rubber-banding.

While striving for collaborative goals, players are also awarded points for individual achievements like saving goals, taking shots, or obliterating enemy cars. These points count towards unlocking cosmetic items like custom paint jobs, wheels, and even comical hats worn by the cars.

With no obtuse ranking system for unlocking functional upgrades, Rocket League gives every player the same capabilities while allowing you the freedom to decorate your rocket-powered rig as you please. Though a welcome gesture, Psyonix may have been too liberal with custom paint, as players are able to apply any secondary color of their choosing. This resulted in some confusing instances when players chose red-based secondary colors for their blue team paint job or vice versa. 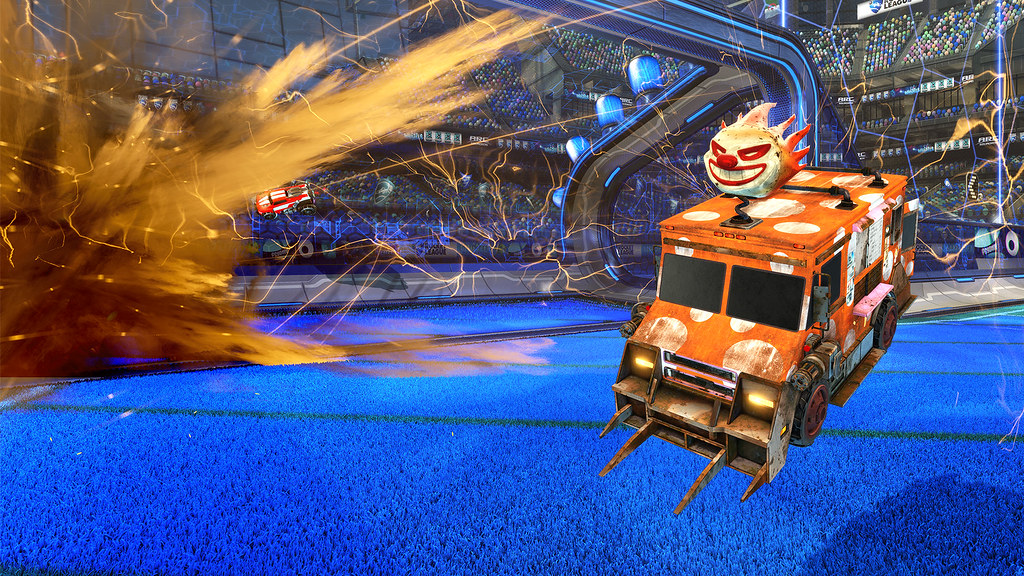 Rocket League’s insane yet pure gameplay makes it an instant classic. Taking a game format established over hundreds of years and throwing rocket-powered cars in sounds like madness, but the result is absolute dynamite.

A game with deep skill-based mechanics, playable either online or on the couch via splitscreen, Rocket League is a perfect multiplayer sports game with just the right amount of crazy. Though its servers have caused a couple of headaches, it easily gets my pick for Game of the Year.

Our Rating
9
Psyonix's rocket-powered battle cars soccer hybrid is an insanely fun and surprisingly deep sports game, and is my game of the year.
Reviewed On: Playstation 4
What Our Ratings Mean