[Kick It] The Guys From Organ Trail Are Making a New Game: Max Gentlemen

Max Gentlemen is designed to entertain the hell out of you.
by GameSkinny Staff

Welcome to [Kick It], where we chat with developers and creators about their Kickstarter projects.

Today we're talking with Ryan Wiemeyer from The Men Who Wear Many Hats about the Kickstarter for Max Gentlemen. Max Gentlemen is probably the most entertaining concept for a game I've seen in a while: it's an arcade style hat-stacking simulator inspired by a spam email about penis enlargement pills.

Everything from the hilarious Kickstarter video (below) to the gameplay itself looks wonderful. Max Gentlemen is designed to entertain the hell out of you.

And it's going to be free.

AND you can get a Max Gentlemen body pillow.

If these guys seem familiar it's because creators Ryan Wiemeyer and Michael Block have had previous success on Kickstarter with the now-famous Oregon Trail zombie spoof, Organ Trail. While following up such a successful cult classic like Organ Trail might seem daunting, The Men Who Wear Many Hats are leaping at the challenge with great gusto.

Max Gentlemen will be available for iOS, Android, Tablet, and probably Ouya.

Wait, only $500? I understand your surprise! This Kickstarter campaign is a bit different than most other video game Kickstarters in that the game will be made regardless of funding. In this case, the Max Gentlemen Kickstarter is actually being used as an interactive merchandise store. Nearly all the funding is going towards creating awesome swag for backers and generating groundswell hype. This is a fairly unique use of Kickstarter as a platform and it flies directly in the face of my previous article where I argued against using Kickstarter as a pre-order service.

So, who are you? What is your background in gaming?

RW: "I'm Ryan Wiemeyer and my partner is Michael Block. We've both used to work for Chicago game studios before we went full time Hats. Now we still make games but we have less insurance."

Anything else interesting about your life?

RW: "Probably a lot of things."

Right then, what is Max Gentlemen and how did it get started?

RW: "Max Gentlemen is a world where we combined the over the top nature of wrestling with Victorian style gentlemen. Whilst brainstorming ideas, Ben (previously of the Hats and now with Trinket Studios) got a spam email entitled Max Gentlemen. We tried to figure out what a Max Gentlemen would be... Thus the world was born. Originally we planned a much larger game with lots of minigames and dating sim elements but in the end we just made one of those minigame ideas for a game jam and realized it was enough to share our idea with the world." 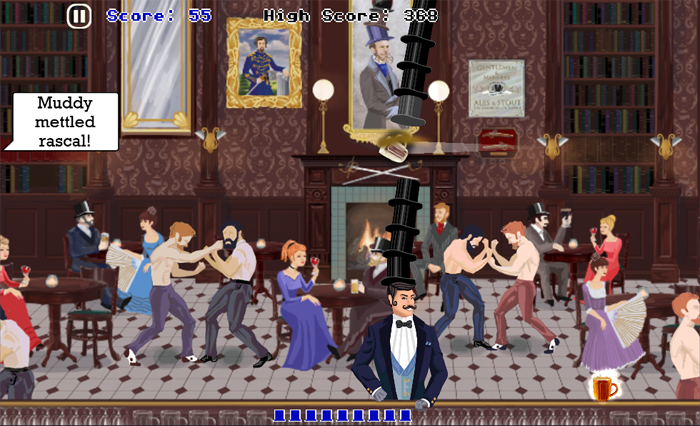 How exactly will multiplayer work? Could you give an example of how a typical round might play out?

RW: "We're still playing around with that. Right now you can play multiplayer on the arcade cabinet here in Chicago. You just play with two players on the screen, stealing beers from each other, competing for the high score at the same time. We're trying to see if we can implement some other fun ideas we have... even a possible co-op in space mode. It depends how much time and money we have really."

"Thanks to Team Fortress 2 I got it in my head that more hats makes you more dapper."

Can you explain some of the inspiration behind the game and the game's design?

RW: "Back on the NES there was this game, Snoopy Olympics. In it, there was a crappy minigame about stacking pizzas or something? Well, thanks to TF2 I got it in my head that more hats makes you more dapper. So I combined the ideas and thought, what if you went to the hat store and had to buy hats but keep them balanced while doing so. That idea slowly evolved into the stacking game we have now where you don't balance hats but you jump them over incoming obstacles. I just realized that talking about the game really makes no sense at all. Haha."

How long has this idea been brewing?

RW: "According to our wiki, I first made the design page Aug 2nd of 2011. So, about two months before we released the original Organ Trail in flash. We might have come up with the ideas around the same time actually. During our brainstorming period."

What do you think is the most exciting thing/what are you most proud of about Max Gentlemen?

RW: "That it makes people laugh and presumably spit take if they were drinking anything. The themes and art alone seem to delight people. I don't think it even matters if the game is good, people enjoy it."

Why are you deciding to launch this project now?

RW: "Because we plan to release it sooner than later so we wanted to use this Kickstarter to build a fan-base and gauge interest."

Why is Max Gentlemen going to be a free game? Is it going to be free-free or free-mium? How are you expecting to pay the bills with this game?

RW: "The motivations behind Max Gentlemen are long and complicated. We originally just wanted to release the game jam arcade version for a buck. But I guess at some point I got this crazy idea that we could test this other crazy idea I have for our NEXT game where only one player has to own the game to play multiplayer with their friends. We recently dropped that for Max Gentlemen since we realized it wouldn't really work as multiplayer is not the focus of the game. So, instead we will just be selling extra levels and characters. Purely cosmetic stuff. Down the line we might add new game modes but everything is very up in the air. We don't do a lot of planning around here. It all comes from the gut.

I like watching numbers go up. Organ Trail: Director's Cut has sold almost half a million copies, but my friends who make free games have over 2 million downloads. While they're are not making as much money... I also want to see that big of a number for one of our games. Maybe we can trick some of those people to buy our other game too?

On top of that, we're curious to see how the free market goes. Everyone told us we were insane for selling Organ Trail: Director's Cut for $3 without any IAP. We've since made enough to quit our jobs and open a co-working space in Chicago. So, I like proving people wrong. I guess you could say spite motivates me. But we also wanted to grow our fan base, see what our reach with a free game could be and grow the "brand" of The Men Who Wear Many Hats which this game is closely tied to."

The swag you are pimping through Kickstarter is pretty impressive - but why Kickstarter? Why not just open up a merch store online?

RW: "Kickstarter has done right by us. Every person that buys something is now accessible to us as fans and vice vesa. If you buy something off a store you don't really engage the developers and they don't engage you. Not to mention that no one cares if you sell 100 shirts, but if you raise X dollars on a Kickstarter, that's worth talking about. Plus Kickstarter is just more fun, as a process."

"I'm not good at half assing games so I put my whole ass in there and then some. I double ass it."

Are the body pillows as amazing as they look?

After the Kickstarter campaign, what will be your next steps?

RW: "At some point we need to transition the artists off of the merch and back to game assets. We still need to finish this game. It's a tiny game but it's got a lot of attention poured into it. I'm not good at half assing games so I put my whole ass in there and then some. I double ass it."

If the Kickstarter had failed (somehow), what were your contingency plans?

RW: "First we would cry a lot and have self doubt and motivation issues. Then we would finish up the game as it stands now and release it. But since this is going well for us, we've decided to add some of those "nice to have" features we were talking about."

Can you describe your interaction with the Kickstarter process?

RW: "Well there is a solid month before we launched where we brainstormed what it would be. I've spent a lot of time pouring over how Kickstarter works so I was fairly content in that I knew people would like what we are offering. We made our Kickstarter to entertain.

As well, the swag is super cheap. We are making like... less than %10 of the money raised. We needed irresistible swag if we were going to get the momentum I wanted."

What advice would you give developers and creators aspiring to use Kickstarter?

RW: "I've given an entire lectures about that. My number one advice is to be far enough along in the game that it looks good and to put your goal lower than you expect to make. But that's a complicated tactic that I don't have time to explain here..."

"Your backers need to know you are going to deliver on what you promise and they should be entertained by your project."

What do you think makes a successful Kickstarter campaign?

RW: "Trust and humor, or a good artist. Your backers need to know you are going to deliver on what you promise and they should be entertained by your project. Or you can just hire someone to make everything look really pretty and they won't even bother reading anything."

If you were to redo the Kickstarter, what would you change?

RW: "If I had known our $100 and $400 tier rewards were going to sell out in the first day I would have come up with more high level tiers. We are still thinking about that but we can't overwork our artists..."

Ok, seriously: Will there be an Organ Trail 2?

RW: "Probably some day... maybe when I'm a washed up old hack who needs some money. Or maybe when the idea excites me again."

That about wraps us up, anything else you'd like to add?

I want to extend a warm thanks to Ryan Wiemeyer for taking the time to answer my questions! If you are looking for more details about the game you can visit the Max Gentlemen Kickstarter page, or visit their website. Keep track of the development of Max Gentlemen by following HatsProductions of Twitter @HatsProductions.

Do you have a Kickstarter campaign or a project you'd like to see talked about on GameSkinny? Drop me a tip for future [Kick It] articles on Twitter @ZacaJay using#KickItJay!

Or, you know, write about it yourself!