Hey, reader. Click on this article. I got some spooky stuff to tell you about the fourth wall.
by Clint Pereira

Hello, reader. I'm sure you know about the fourth wall. If not, it's the imaginary "wall" between us that I'm breaking right now to address you directly.

Games often break the fourth wall to give tutorials or make a self-referential joke. But fourth wall breaking is at its best when it's used to take players out of their comfort zone. In horror games, it can be used to terrifying effect.

Before you realize Batman has been injected with Scarecrow's neurotoxin, the screen starts going out of focus, as if there is something wrong with the game itself.

But that's not the last of it. Even after you find out what's happening, the game gives you a fake game over screen. Way to hit the player where it hurts. Spec Ops: The Line is a game about the mental breakdown of the protagonist, Martin Walker, as he tries to complete his mission against all reason.

As Walker slowly loses his mind, loading screens begin to address you, the player: "This is all your fault." "How many Americans have you killed today?" "You are still a good person." 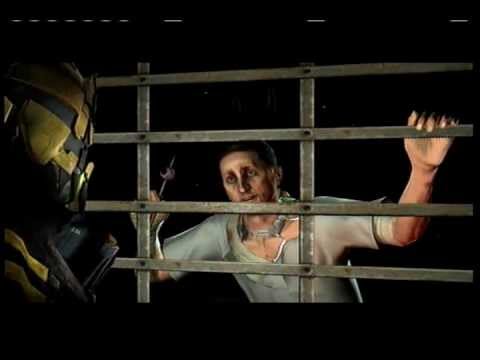 Dr. Nolan Stross is going mad. He sees things that other people don't. And while this is reason enough to be cautious around the man, he becomes even creepier when he directs his mad ramblings at the player.

Before this scene happens, you get a good view of the room. There's nothing Stross could be screaming at except for a wall. That is, the fourth wall.

If you don't want spoilers for Bravely Default, it may be time to scroll past this section.

A revelation comes right after you begin to suspect something is wrong with your fairy partner, Airy. The game immediately confirms your suspicions by giving the message "airy lies" in the US version or "lying airy" in European and Japanese versions.

The once-familiar menu screen is permanently branded with this haunting revelation.

Flowey is one of the creepiest fourth wall breakers in games, hands down.

If you kill Toriel at the beginning of the game and reset, he will know what you did and will mock you for feeling bad about killing her.

During the genocide run, Flowey will mock not you but all of the people watching on YouTube who don't have the guts to play through a genocide themselves.

This Gamecube game really went directly for the jugular of the player. There were jump scares and spooky things, of course, but losing "sanity meter" in game also meant that the game would appear to reset itself, mute the television, unplug the controller, or erase your save file. Brutal.

Even when you caught on, it was unnerving to see this happen for the first time.

This is the moment that everyone remembers from Metal Gear Solid. How does Psycho Mantis know I play Castlevania and Suikoden?!

It may seem silly now (the game reads off your PlayStation memory card), but at the time it was a mindblowing event.

After all, a voice actor had to read these lines off. How many games could he possibly know?

Well, as it turns out, just those two Konami games. It kind of loses its steam once you know more about it.

Maybe developers can push horror so far out of the game that it turns into comedy again. After all, the games at the top of the list are only there because they did it first.

Surely you can see, reader, that breaking the fourth wall means less when it is overused. This is a difficult technique to pull off, which makes the games on this list all the more impressive.