Wildstar has the same subscription model as the upcoming hit, Elder Scrolls Online... unless you play the game
by NorthwestGamer

Let me just start by saying, this is an extremely under-hyped game. If there is any game coming out in 2014 that I'm excited for, it is probably WildStar.

WildStar is an MMORPG developed by Carbine Studios that takes place on the planet Nexus. The company was formed by 17 former Blizzard members left to "do anything but WoW." I was originally going to use this article to tell you all about the features of the game, but then I realized you can learn about the gameplay easier by watching a YouTube video, such as the following:

Instead, I decided to use this article to talk about the one thing that most people do not know about, or are confused about.

I know what you are thinking, "oh great, another MMO that's going to cost us huge monthly fees and a premium startup fee," but that is not the case. This is not just another Elder Scrolls Online that is about to try to come in and drain your wallet.

When you first buy WildStar, you have to pay a full $59.99 for the game, or $74.99 for the deluxe edition. Both versions get you 30 free days of playtime. So, we're off to a bad start as far as a "different subscription model" than normal MMOs, but here is where it gets better. 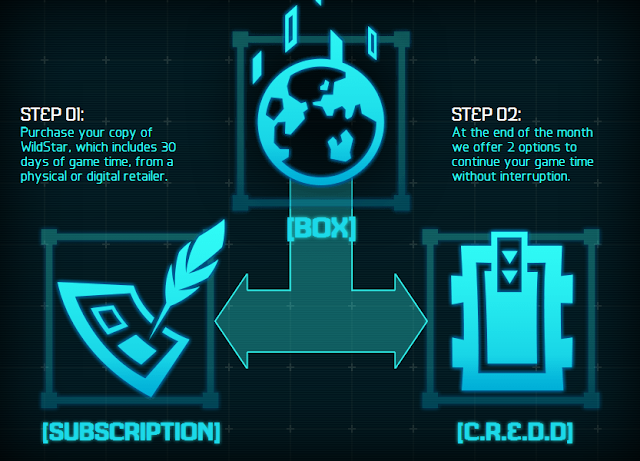 You might have heard of this style of subscription before--it is not the first time it has been used, but it will be the first time seeing it for a lot of people. It's a pretty basic system: C.R.E.D.D. can be used as an alternative way to purchase game time. The C.R.E.D.D. can be bought with either real money, or in-game currency. See where this is going? If you play the game enough, and earn enough currency, you never have to pay real money for your subscription.

Now, if you do not want to use C.R.E.D.D., don't mind paying a subscription, or just went away for a while and can't afford it, then you can still subscribe the old-fashioned MMO way. The cost for a subscription is as follows:

After looking through the information provided for Wildstar, I have still found that I have two questions about this system that they do not answer. So for those of you who want more details on this system, I have reached out to the developer for answers and have received feedback. They were not able to disclose much, but they gave me what they could.

Is there any other way to earn C.R.E.D.D. than the two ways mentioned?

The reason I have this question is that there are two sources of C.R.E.D.D. currently posted on their site: $20 per C.R.E.D.D. or buying them from other players for in-game currency. So every C.R.E.D.D. has to start with somebody paying $20 for it, there is no in-game store to buy it from? What is the motivation to make the seller want to spend $20 of real cash just to turn around and resell it for fake money? The only thing I wonder is that if this is supposed to be a source where players can buy gold for real money, but without breaking the rules. It still doesn't seem like there will be a lot of demand for C.R.E.D.D.

Answer: They have confirmed that these two sources will be the only two sources. They referred to their sample scenario, where one player has money, but not time, so he buys C.R.E.D.D. and sells it to somebody who does not want to pay monthly.

Will C.R.E.D.D. not be affordable until maximum level is achieved?

This is something that did not seem like it would be a problem until I realized you use the standard in-game currency. If the currency used to buy C.R.E.D.D. was earned simply from time played, then this would not be an issue; however, since it is the standard gold, won't low-level characters earn gold at an extremely slow rate and not be able to afford C.R.E.D.D.?

Answer: They told me that they were not able to discuss the price of C.R.E.D.D. so no light has been shed on this issue.