DreamHack's Winter 2016 Hearthstone Tournament went down this weekend. We know you were in a turkey-coma, so here's what happened.
by Ted Racicot

This year's Hearthstone Grand Prix held its final event this weekend at DreamHack Winter 2016. Players competed against one another in hopes of winning their share of a $27,500 prize pool. More importantly, however, this was the first major event in which players could earn points for the 2017 Hearthstone Championship Tour.

The first two days of the event consisted mostly of the 9 round Swiss stage. During this stage of the event, many fan favorites were eliminated. Players such as Firebat, Sjow, and Reynad failed to advance to the next round. Even defending World Champion Pavel failed to advance after only going 4-4. 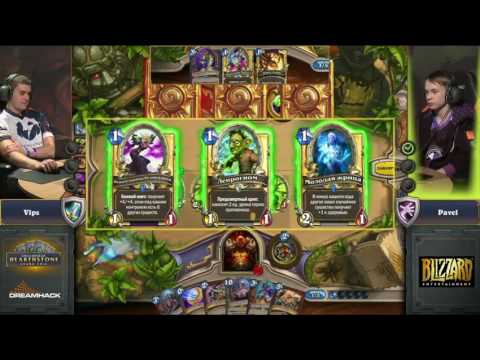 After the Swiss stage, the remaining 16 players competed in a single elimination tournament. Though many well-known players failed to make it to this round, some remained. One fan favorite that remained was Complexity Gaming's SuperJJ. After going 7-2 on the Swiss stage, SuperJJ looked to be in contention for the Grand Finals. However, his hopes were ended in the Round of 8 when a relatively unknown player, Weghuz, defeated him 3-1.

Weghuz would continue to the finals where he would face off against GamerOrgin's Mitsuhide. Mitsuhide was the first to draw blood, winning the first match with his Druid deck against Weghuz's Zoo Lock deck. Weghuz, however, struck back winning the Druid mirror match up as well as defeating Weghuz's Zoo Lock deck. Mitsuhide was not going to go down easily, however. He was able to win the last two games with his Hunter deck, defeating Weghuz's Druid deck as well as his Warrior allowing him to win the series in a close 3-2. The entirety of their epic Grand Finals can be watched below:

With his victory, Mitsuhide not only won $8,000 but also earned 15 Hearthstone Championship Tour points for the 2017 circuit. The rest of the prize pool was split between second place Weghuz, and third/fourth place finishers Und33d and TheFallen.

I was raised on video games. Some of my earliest memories include watching my father play the original Diablo and Starcarft games. It was only natural for me to inherit his love of gaming. Through my writing I hope to share this love, particularly for PC games as well as eSports.