Our guide will help you choose a hero to play in Motiga's upcoming Gigantic game.
by Stephen F. Johnston

Gigantic made a huge splash this year at Pax East with colorful, eye-catching graphics and a bevy of heroes with various play styles and abilities. To help you choose what you want to play here is an overview and tips and tricks for every playable hero.

Gigantic is planning a 2015 release but was showing alpha versions at Pax East. Based on observations at the booth, they are clearly community oriented, and I expect the hero choices to grow and change heavily based on user feedback.

Gigantic game controls are WASD for movement and the following Diablo-esq ability patterns:

Attacks and abilities can be upgraded as you gain experience and passive abilities are upgraded every few levels.

Gameplay is team based 5v5 and uses point control for buffs and defense. The teams guard a massive Guardian and the fight culminates when the Guardians move to the middle of the map in a final standoff alongside the teams. The overall gameplay is a new take on the MOBA genre and not even a single control point is required to be taken or controlled to win.

LMB: Heat Wave - AOE projectile.
RMB: Dragon's Breath - Cone of flame.
Q: Detonate - Damages enemies near you while launching you in the direction you choose.
E: Hot Hail - Flaming rocks from the sky.
F: Flame On - Rivers of flame spew forth in front of you.

A ranged summoner that uses portals and summoned beasts to fight on the battlefield.

LMB: Reach Out - Melee attack with extra reach.
RMB: Portal Beast - Portal beasts placed on the ground.
Q: Hidden Portal - Portal trap that launches enemies.
E: Displacement - Disappear into a portal and reappear nearby where you choose.
F: Abyss - Pull enemies in and flings them into the sky. 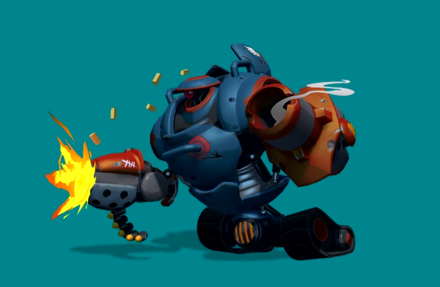 Ranged and tanky (because he is a tank), KH-206 unleashes a barrage of bullets while soaking up the damage.

Imani is a ranged character with a crossbow for sniping. Imani is styled after WWI or WWII spies.

A melee hero focused on crowd control, slows, and traps.

A ranged magician with magic lightning bolts and slowing beams.

A bounty hunter styled ranged hero. Shoots a powerful main shot and has a bola that stuns and slows. Rolands grappling hook provides a quick escape when things get tough.

A melee hero styled after a fencing swordsman. An agile attacker who uses Slash and Swoop to take down opponents. Tyto has a pet named "Fang" who is a pet mouse.

LMB: Talon - A slashing sword attack
RMB: Swoop - Leap as you lunge with your sword
Q: Blade Dance - Sping your sword to attack in all directions
E: Fang - Fang attacks the enemy you target
F: Blur - You rush forward delivering bleeding wounds to enemies you pass

A ranged hero that uses magical potions and has support abilities.

A ranged hero with a bit of damage and support. Orbs drain your health, but boost your powers. You've got to keep this effect in balance.

LMB: Ray of Judgement - A beam that hurts enemies and heals allies. Orbs provide more power.
RMB: Smite - A fiery projectile. Orbs provide more power.
Q: Divine Wind - Heals you. Uses all orbs to increase health regen.
E: Devotion - Creates up to three orbs which drain your health until another skill uses them.
F: Armor of Faith - You are immune to damage for a short time.

A ranged hero with bows and poisons.

LMB: Shoots an arrow. Hold down for more power.
RMB: Creates a poisonous cloud. Arrows shot through the cloud become poisonous.
Q: Green Man - Create a decoy of yourself.
E: Hidden Spring - A pool of water that enables super jumps and heals you and your allies.
F: Natural Roots - Immobilizes nearby enemies.

LMB: Gaze of Envy - Hold down to drain enemy health and heal yourself.
RMB: Words of Sprite - A curse that slows enemy movement and reduces armor.
Q: Wall of Sorrow - Sends a wave that damages and interrupts enemies.
E: Mark of Despair - Creates an area that slows enemies and reduces their damage.
F: Cursed Soul - Enemy hits heal your allies.