Project CARS 2 has been confirmed and it'll be crowdfunded. Community not too happy given the state of the prequel.
by Ford James

Project CARS 2, the sequel to the recently released Project CARS has been announced by Slightly Mad Studios.

They have announced Project CARS 2 will be funded the same way as the original was: crowdfunding. They’ve opted to use their own crowdfunding platform, World of Mass Development, instead of more popular platforms such as Kickstarter or Indiegogo.

Project CARS released just over a month ago on May 7th and has been ridden with problems since the release.

Broken AI, unfinished features, and game-breaking bugs are just a few of the complaints strewn across the review section on Steam. Slightly Mad’s blog post and tweet evoked similar responses: 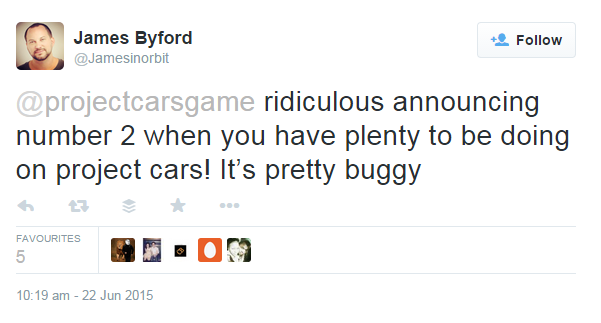 There’s no release date for Project CARS 2 yet, not even a date for the launch of their WMD project. Nevertheless, I can’t help but feel Slightly Mad have jumped the gun a little by announcing the sequel so soon.