Monster Hunter provides long hours of gameplay and many challenging boss fights, With excellent and fun 4 Player co-op.
by vegna871

Monster Hunter is a household name in Japan, but it is also a series that hasn't seen  a lot of movement in the West quite yet. Though it is gaining ground, the western fanbase is still small, it's a shame because it is a great series with several hundred hours of fun per game. The series is difficult, but you shouldn't expect much less from Capcom, who have made a business out of making difficult games. The latest iteration of the series is Monster Hunter 3 Ultimate, and it is probably the best in the series so far.

I'd love to toss out an idea of what Monster Hunter plays like by comparing it to another game, but nothing else quite plays like it, except for a few copycat games that are even more obscure.

The best description of the game I've ever heard is "boss fights, the video game," and it rings true.  Though a new player will likely take two or three hours getting to the first boss, the Great Jaggi, once you get past him you'll spend very little time doing anything except fighting the game's boss monsters.  The combat in the game is incredibly deep, strategic, and deliberate.

For the most part, fights play by a "hit and run" set of rules, though this varies a bit depending on the weapon you're using. You will have to evade the attacks of monsters or get hit for some serious damage.  Much like Dark Souls, most boss monsters will hit you for a rather large percentage of your health. It is not uncommon to get killed in three hits. However, you are allowed to get knocked out three times before you fail the mission, so don't worry too much about dying.  You do have a dodge button, and learning to use it is key to playing Monster Hunter. You'll want to avoid Monster's attacks and capitalize on the openings these attacks leave. 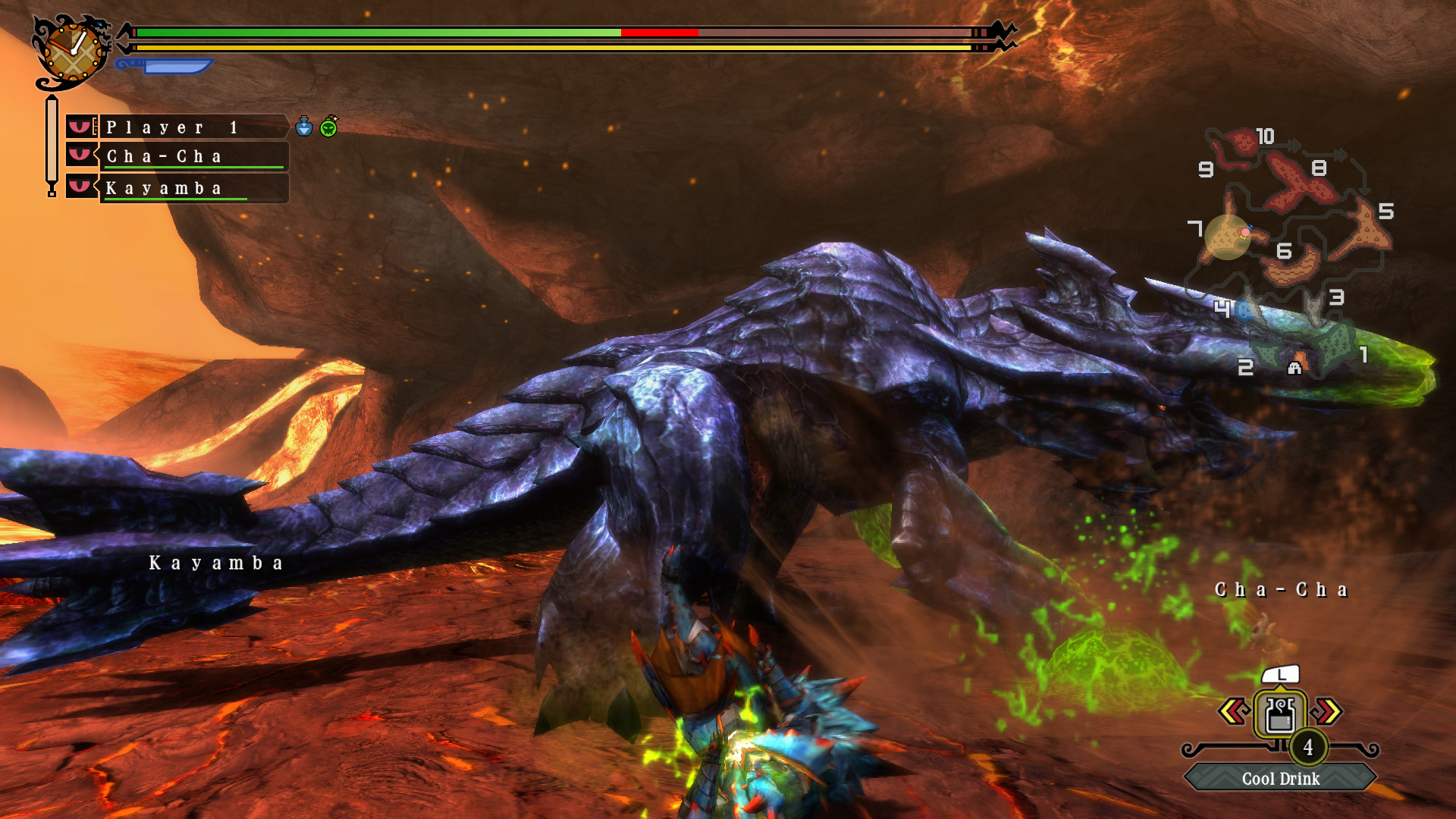 Once you have defeated a boss, you'll want to carve them up to get monster parts.  Each monster has various parts for carving, and these parts are needed to craft new equipment. Every boss monster has a breakable part, a part of their body that, if damaged enough, will break. Some monsters only have one, others have 4, and some even have 8+.  Breaking parts can weaken certain monster attacks, and will net you additional carves or additional rewards in the mission rewards screen.

Breaking parts tends to lead to nice rewards, so once you have the hang of the game I definitely recommend focusing on it. Note that some parts (namely tails) can only be broken by bladed weapons, so Hammers, Hunting Horns, Bows, and Bowguns may have some trouble in the game, since the best monster rewards tend to come from tails.

The game also has several items to help you out. Various health recovery and stamina increasing items are a must for any hunt.  Blademasters will also want to bring along Whetstones to sharpen their weapons, while gunners will want to take ammo, of which there are many and varied types. There are many other useful items as well. Pickaxes help you gather ore used in crafting gear, bugnets let you collect bugs useful for making some useful items.  You can bring along traps and explosive bombs to help make boss fights easier. Paintballs help track monsters on the map, while Flash Bombs can blind them.  These are just a few of the many helpful items you can find on your monster hunter journey. Items can be gathered in the environment or bought, some items are only found in the environment and a select few can only be bought. There is also a farm that you can use to farm certain items for a price.

The game is very play-centric, there's little to no story to follow, so you can get back to beating on a giant monster fairly quickly. That doesn't leave a ton to talk about after the gameplay paragraph, but I would like to take some time to talk about the game's large and in-depth gear system.

There are 12 different weapon types, each of which plays completely differently (except for the Light and Heavy Bowguns, which are similar but not the same). Weapons become more powerful through upgrading. you can buy and craft several basic weapons, but to make them truly powerful you have to upgrade them. Upgrading is done at the town's blacksmith, who will require money and some monster parts. The more advanced the weapon, the better the parts you need. There are only two towns, one offline and one online, and therefore there are only two blacksmiths in the game.

There is also armor in game. Armor comes in five pieces: head, chest, arms, waist, and pants.  Each piece of armor has set defense, resistances, gem slots, and skills.  While defense and resistances are nice, what you're really looking for are the skills.

Skills alter your combat performance. You can increase your attack power, make yourself immune to status effects, make monster parts break more easily, and much more with armor skills. You can also make gems to stick in slots on armor, weapons, and charms to add skill points. Charms are bits of gear that you can find out in the wild (usually by mining or in quest rewards) that will give some spare skill points and occasionally gem slots.

It is important to note that skills only activate once you have ten points towards the skill, less than ten points does nothing. Certain skills also become stronger at fifteen or twenty points.  Most armor sets focus on three or four skills at a time, usually one or two of those skills is actually quite useful and the rest are ok, at best. Once you get into the lategame stuff, mixed armor sets can lead to having many powerful skills on the same set, so experimentation with armor combinations does work in your favor.

The game has two major flaws, and a few things that might turn some players off.

The first, and biggest, of it's flaws is the lack of online multiplayer on the 3DS. The 3DS is fully capable of having online, but it wasn't included. There is a tunneling feature through the Wii U, but if you have a Wii U you might as well just buy the prettier Wii U version of the game. The Wii U version has full online multiplayer capabilities, and can interact with up to three local 3DS versions, but not at the same time.

The other major flaw is the story. It's not completely absent, but it adds very little to the game. Your goal is to stop earthquakes in Moga village by hunting the monster that is causing them. That's about it. It's not special, and you can ignore it and still have a fun gameplay experience, but a story would be nice. Each hunting mission also has a little blurb about why you're hunting the monster you're hunting, but while these are occasionally humorous, only a select few quests tie into the overarching plot.

Despite these, I still give the game a ten, as I tend to not mind playing solo and don't care about the story anyways.

The things that might turn some people off are the long hunts, large grind, and the slow and deliberate animations.  A lot of new players tend to put the game away before getting into it because they think it feels clunky.  And, when fighting small monsters in the beginning of the game, it definitely can.

However, the bread and butter of the game is the huge boss fights, and the slow animations are designed for these.  While it does take some time to consume a potion, sharpen a blade, or eat a stamina-increasing steak, these animations are timed to give a risk-reward system to the boss fight and make it feel, if not realistic, intense and immersive. I'd urge you to tough this out and get into the meat of the game.

The other barring feature to many players is the amount of time you invest into a single hunt. An average hunt takes about 15 to 20 minutes, even for an experienced player. If you're new to the game, certain bosses can take upwards of a half hour. and there are a few massive bosses that are designed to take half an hour or more. The game is fun, but some gamers can't be asked to spend that much time on one fight, especially when you'll likely have to fight the monster 20-30 times when farming for rare items. Those items present another barring mark: the long grind for rare items.  When trying to power up a weapon to it's maximum, you'll likely come across items called "Plates," "Gems," "Rubies," and so on. These are the game's rare items, and they have a very small chance to drop. It will likely take several hunts of a single monster to get just one of these, and you will likely need several of each over time. While the grind is often joked about by longtime hunters, it can be barring to new players.

All in all, Monster Hunter 3 Ultimate is an excellent game, one I think is well worth a try by any fans of hard action games. Give it a try, and definitely give it the benefit of the doubt for the first couple hours. There's a lot of fun to be had in the game.

Our Rating
10
Monster Hunter provides long hours of gameplay and many challenging boss fights, With excellent and fun 4 Player co-op.