Geometry Wars 3: Dimensions will be releasing on PS3 and PS4 November 24th, landing the series on PlayStation consoles for the first time.

Adrenaline-pumping, twin-stick arcade shooters have always had a home on Playstation, be it Super Stardust HD on PS3 or Resogun on PS4, but Geometry Wars has always been a staple of the fast paced genre that PlayStation owners have missed out on this popular series with over a decade of success behind it.

The above video shows the frenetic pace and explosive visuals the game is known for and the below description by Craig Howard, Co-founder of Lucid Games, tells you everything you need to know:

"If this is your introduction to the series, then let me sum it up like this – Geometry Wars is electrifying. Screen-melting visuals, fast-paced, bright, and boisterous gameplay, astronomical high scores, bass-thumping, heart-pumping music, and a vibrant energy that can transcend you to pure Zen-like state as you feel totally absorbed into the game. This latest entry in the franchise may look different from its predecessors, but those defining characteristics are still infused into every moment of Geometry Wars 3: Dimensions."

That's a lot of intense adjectives, but I would be hard-pressed to make an argument against any of them. Dimensions will also feature two special stages for it's PlayStation debut, the first of which, is titled "Symbolic" and features enemies that spawn in clusters in the shape of the classic controller button symbols on the PlayStation controller. 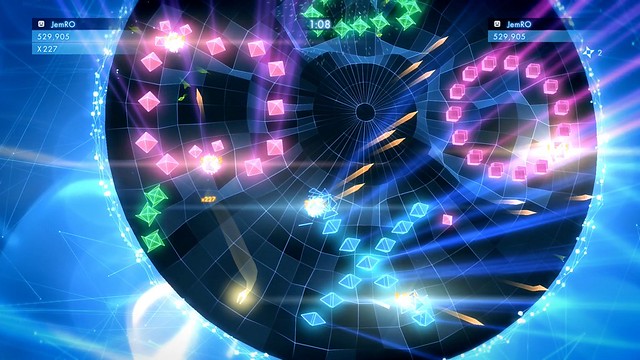 The second stage "Secret Eye" will be available as a pre-order bonus and features "a distinctive triangle-shaped grid and an evolving inner core that forces you to make split second decisions."

Geometry Wars 3: Dimensions will drop on November 24th for both PS3 and PS4 and is available for pre-order now in the PlayStation Store.