3 Things “Shadow of the Tomb Raider” Should Do

With "Shadow of the Tomb Raider" all but confirmed, here are three things the game needs to do to stand out above its predecessors.
by J.Lucas

I shouldn't need to tell you how big and important the Tomb Raider franchise is for gaming. Since its inception all the way back in 1996 (which, today, seems like ancient history in video game terms) it has created the action-adventure game genre as we know it today, it proved that you don't need to hide a female protagonist inside a suit of armor to make her a star, and has spawned a multimedia franchise containing 11 main games, numerous mobile and handheld spin-offs, two full-length movies starring the biggest female actress at the time (with another Tomb Raider film coming), thousands of pages worth of comic books, an animated series, and even a slot machine.

There is at least one game, possibly two, coming as well. One presumably in development by Crystal Dynamics, and another certainly in development by Eidos Montreal titled Shadow of the Tomb Raider. And no, despite the name and some early prototype images floating around, it's probably not going to feature Lara fighting Colossi.

Now, as much as I enjoyed the previous two games in the reboot, 2013's Tomb Raider and 2015's Rise of the Tomb Raider, I couldn't help but feel like they were missing something. I grew up in a different era, with the first Crystal Dynamics reboot trilogy (Legend, Anniversary and Underworld), and while I did really enjoy the newest reboots, they were missing things that they could've benefited from. So despite the fact that Shadow of the Tomb Raider is probably already in full development, let's give the good people over at Eidos a couple of pointers about what they could add -- at least to improve the experience even further, and create the definitive Tomb Raider title!

By far the biggest problem of the reboot games is that Lara seems kind of passive in them -- she's not doing much in them, she has things happen to her. Which was fine in the first game, which cast her in the role of a shipwrecked college student who had to survive by any means necessary, but starting from Rise we were supposed to start seeing glimpses of the Lara we all know and love... and we didn't.

Once again, despite the fact that this time she's actively hunting for something, she finds herself in a situation beyond her control, forced to survive in the Siberian wilderness. Disempowering Lara in such a way might make for a fun gameplay experience built around resource management and scouting, but it also takes away a good chunk of what makes her interesting. She's not some passive victim that has unfortunate accidents happen to her, she's Lara 'Friggin'' Croft, she gets herself into danger on purpose all the time for the thrill of it! It's important to establish Lara as someone who is perfectly capable of escaping from a dangerous situation if she wants to, but why would she ever want to? Where's the fun in that?

In addition to that point, it wouldn't hurt if she's a bit more likeable, personality-wise. Because, let's face it, reboot Lara is pretty plain, and sometimes even comes off as a bitch -- like when she called her stepmother a c**t. Lara Croft isn't supposed to lose her cool like that, not unless something extremely serious has happened. Lara is someone who always had a witty remark in store, someone who genuinely enjoys every single thing about her life, who takes a moment to take in the sights, who isn't afraid to banter with her villains when appropriate because that's all part of the fun. Treasure hunting is a game for her, it's a sport. She's the best there is at it, she knows it, and she loves it. Lara needs that confidence back, alongside her sense of humor. A staple of the Tomb Raider franchise since its inception have been the varied locations that Lara travels to throughout her adventures. The very first game took her to the Himalayas, Greece, Egypt and even Atlantis. Legend took her to four different continents, there's hardly a place that our favorite raider of tombs hasn't visited in her pursuit of shiny trinkets from the past! As such, it's kind of disappointing that the rebooted franchise have decided to mostly keep her confined to only a single location.

It made sense in the 2013 game, as its whole premise was that Lara was stranded on an island she couldn't escape from, but Rise of the Tomb Raider, despite having a great opening in Syria, stuck Lara in a Siberian installation for the rest of the game. Meanwhile, the Uncharted series -- Tomb Raider's direct competition which have been very clearly inspired by their rival -- have continued to send their protagonist Nathan Drake across the globe right up until his adventure ended in 2016's Uncharted 4: A Thief's End. 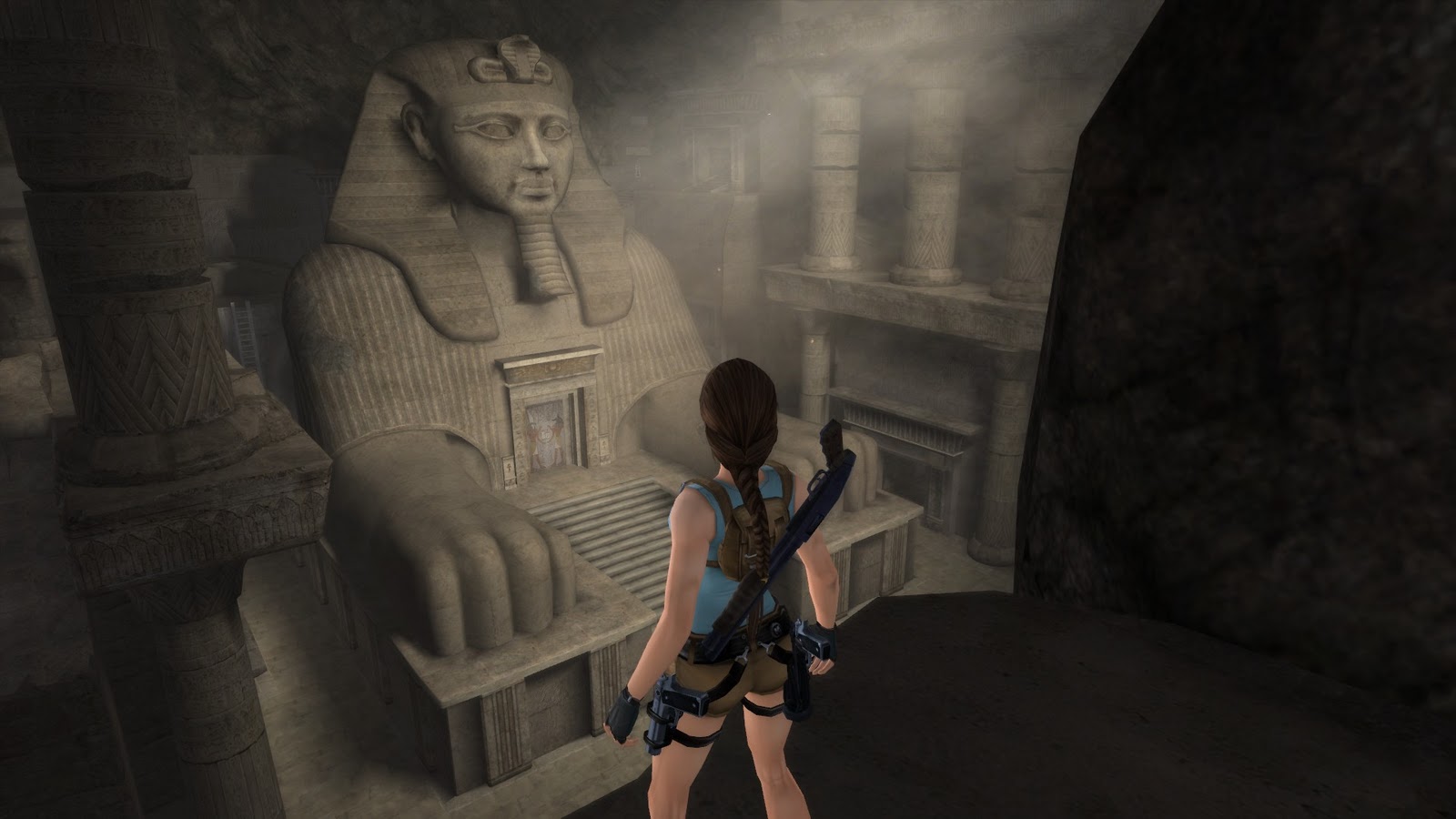 So, how do you reconcile the more open-ended level design of the rebooted games with my idea? One option would be to do what Metal Gear Solid V: The Phantom Pain did and just give Lara a central hub (such as Croft Manor) that she can use to freely travel to one of several large locations in the world. For example, imagine being in Ghana, you retrieve some kind of artifact from a tomb there, do a couple of side quests and gather supplies, then call a helicopter, go back to Croft Manor for a change of equipment and clothes and fly over to Afghanistan to continue your adventure.

This also fits in with the 'Lara isn't FORCED to do this, she's doing it because she wants to' philosophy I outlined earlier, and adds a very convenient fast travel function to replace the nonsensical one from the previous game where you mysteriously teleport between fireplaces. Another option would be to do something akin to Dark Souls where the whole world is interconnected, but still divided into zones which are very distinct in appearance. However, I'm not sure how realistic that would be in practice, and it also defies the idea of Lara travelling the world.

The best, or depending on who you ask, worst thing that Tomb Raider: Legend added to the formula was that it made Lara a team player. Instead of working alone, she'd now hired a team of experts, namely the hacking genius Zip and the historian Alister (alongside her butler Winston, who makes a return from earlier games after narrowly avoiding a horrible, icy death -- don't try to deny it, you know what you did). Aside from that, she also had numerous contacts across the globe, such as the engineer Anaya, and by Tomb Raider: Underworld she'd also made frienemies with the mystically powered Amanda.

This gave Lara a supporting cast, people to work off. Some people loved the banter between Lara, Zip and Alister during missions (I know I did), others thought it detracted from the experience. Both opinions are valid, but in any case, it's better to have a cast of characters you can get attached to than simply having Lara by herself, in silence, forever.

The rebooted games tried to do that, with the implication being that the survivors from the first game would go on to have their own adventures together, but the only one who joins Lara in Rise of the Tomb Raider is Jonah -- the rest disappear between games (including Sam, Lara's best friend who was a HUGE driving force behind her motivations in the first game), and unless you've read the comics, you'd have no idea what even happened to them. Hell, even Jonah is barely in Rise, for the most part he's merely a damsel in distress for Lara to save and take care of rather than an actual character that she can work off. He's a plot device.

If we're to move forward, we need an established cast. Again, look at the Uncharted franchise, which by the first game had established that Nathan Drake worked alongside Sully and Elena and then followed through on that in the second game, further expanding the cast in the second, third, and fourth games by adding Chloe, Charlie, and Sam, respectively. Only, Rise of the Tomb Raider added no one, and even Jonah isn't all that interesting or compelling -- the most interesting and compelling characters from the reboot died either in the 2013 game or shortly after it. I'm not saying that Lara absolutely needs to have a voice in her ear 24/7, but an established cast of partners is basically a necessity for these types of games. We need people we can care for... especially since, right now, we don't exactly care about this version of Lara all that much.

These Changes Will Make A Great Game Better Look, I'm not saying that if Shadow of the Tomb Raider does none of those things then it's going to be a bad game. Rise of the Tomb Raider had a boring Lara, was constrained to one location and only featured one returning character, and yet it was still a really great game -- and a worthy successor of the 2013 reboot.

However, right now Eidos Montreal have an opportunity to not only follow the formula that Crystal Dynamics established four years ago, but to improve upon it, to enhance the Tomb Raider experience. They can add things which have worked in the series before, but have been lacking recently, to create a game that's different than the one before it. Whether or not they do any of that, well, only time will tell, but one can only hope.