After looking at Sony's hardware track record, it's pretty safe to say that the futures of the PlayStation VR and PlayStation 4 Pro don't look bright.
by Clayton Reisbeck

Sony has been pretty busy in the past couple months. Last month at a meeting in New York, Sony announced the PlayStation 4 Pro and two weeks ago the PlayStation VR was released. With all these new toys, we should be excited, right? I seriously doubt it.

Let me preface all of this by stating that I game primarily on PC. I find it to be the best place to play games on and feel that I get the best bang for my buck with it. I do have ready access to a PlayStation 4. My roommate has one that I can play anytime that I want sitting out in my living room (we affectionately refer to it as the Bloodborne machine).

With that out of the way, I still feel that the latest hardware offerings from Sony are on a line of items that are doomed to fail. Let's look at a couple reasons why I feel that is the case. I'd have to say my biggest concern with both of these items is their price. First of all, there's the PlayStation VR. The headset itself is $399.99 but you need a PlayStation 4 (tack on another $299.99), and you need the PlayStation Camera (add another $59.99) to play it. If you want to take advantage of the motion controls, you'll have to pick up a couple of six-year-old PlayStation Move controllers which Sony is conveniently selling you a bundle of two controllers for $99.99.

Luckily, there is a launch bundle that has the headset, camera, and controllers for $499.99. So if someone is just now jumping into the PlayStation VR scene without the console, they're going to be dropping $799.98 without tax. The issue here is that they are spending that much on the inferior version of this experience.

The best way to experience the PlayStation VR is to buy the PlayStation 4 Pro when it comes out in November. The PS4 Pro is going to run you $399.99. So instead of $799.98 you'll be slapping an additional $100 onto that to get the best experience -- and if we're talking about playing in virtual reality, you want the better experience. Sony is saying that the PS4 Pro will be able to put out a higher frame rate and better graphical output for VR and considering that one of the biggest concerns with VR is motion sickness, having the best hardware to reduce the chance of that happening is needed.

With the both of these items, I just feel that the common consumer isn't going to rush out to pick up these items. The PlayStation VR, while being the cheapest VR option on the market right now, just doesn't have the support or the games to make it worth its price right now.

The PlayStation 4 Pro is the bigger issue I see with the common consumer. First of all, the PlayStation 4 is 3 years into its life. I really think the big surge of people buying those consoles has died down. I just don't see people dropping an extra $100 on top of the PlayStation 4 (the new slimmer model) price just for the chance of things looking a little prettier.

The other issue is that the PS4 Pro is being marketed to run games at 4K and put out more games at a stable 60 FPS. As of right now, the amount of people who own 4K TVs is still pretty low. 4K is a new technology that hasn't been able to be made cheaply. A quick search on Google, tells me that some of the cheapest 4K TVs are $500. So if you want to get the most out of that console, you'll be dropping an additional $500 minimum to make everything look pretty -- and those TVs are simply not that great. I just don't see the common consumer going out of their way to do that. Of course, you'll have the hardcore folks out there with plenty of expendable income to afford these things. I just don't think that those people are the core of the market that Sony is hoping to sell to.

Sony Loves to Forget About its Toys

If you wander back through Sony's recent hardware history, you're going to find quite a few things that just aren't heard about anymore. Does anyone remember the PSP Go? How about the PS Vita? And we just talked about how the PlayStation Move controllers sat in a warehouse collecting dust for six years before Sony decided that they would package them in pairs and re-sell them for $100 -- $50 a piece for six year old hardware is crazy high. Sony is very quick to announce some amazing new hardware only to toss it in a ditch a couple years (if not months) down the line. I really think that this ditch could be the next home for the PS4 Pro and PS VR.

I think the first thing to hit the ditch is going to be the PlayStation VR. As of right now, the PS VR has very little to offer in the way of engaging games that use the technology; right now it has nothing more than tech demos. If they want that device to survive, we have to start seeing games that give us a reason that VR is the better option over using a standard display and controller. The gimmick of being able to turn around and see that the game world as you would the real one, will only last for so long. I just don't see people going out to buy such an expensive device to do that for extended periods of time, and if people aren't willing to do that, Sony will drop it like a hot potato -- the past has proven even if something sells decently, the PS Vita, Sony will drop it anyway.

The PS4 Pro probably won't be far behind the PS VR in hitting the ditch. The amount of games that will be getting the 4K upgrade isn't very large at this point, and I just don't think people will be rushing out to get this thing just to see the threads on someone's clothes. 4K still hasn't completely caught on in the common gaming world so buying a console that is made to showcase that, just doesn't seem viable to me. Again, if people don't buy it, Sony has no reason to support it. Both the PS4 Pro and PS VR are not the best items on the market for what they are offering. Let's start with the PS VR here. The PlayStation VR is the latest virtual reality headset to hit the market after the Oculus Rift and HTC Vive. While it is the cheapest headset on the market, it is most definitely the least powerful. Both the Rift and the Vive are much more powerful devices that are capable of much more. The Vive offers room-scale technology and the Rift has updated to be able to support it as well (but as of right now, you can't get the extra sensors needed). The PS VR doesn't have this technology, as the only camera it has is the single PlayStation camera needed to sense the headset. The current play area that is allowed by the camera is smaller than what the Vive offers.

The other issue with the PS VR is that it has nowhere near as much game support as both the Rift and the Vive do. Both the Rift and the Vive are PC-based peripherals so finding support for games to be played in VR is much easier than that on the PS4 currently. That and, the Vive has the backing of the Steam storefront so finding games for it is much easier than that on the PlayStation. The Rift is also PC based and there are rumors that it will be able to be used with the Project Scorpio console that Microsoft announced at their Xbox press conference during E3 2016. The PS VR is locked to the PS4 currently so unless lots of companies start churning out VR games or older games start offering VR support, both the Rift and the Vive beat out the PS VR in games. 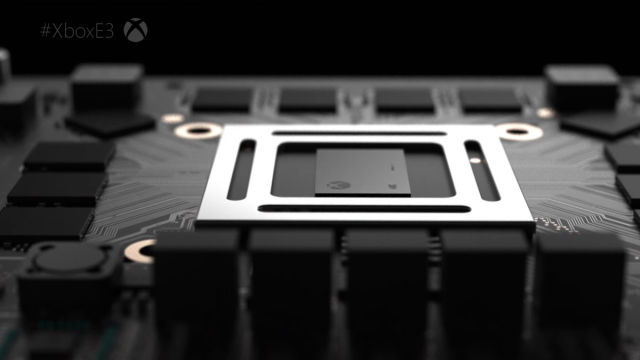 Let's talk about the PS4 Pro now. The PS4 Pro is offering gamers a home console that will output 4K images and support for HDR, with a new GPU with 4.2 TFLOPS, and an 8-core processor. These all sound nice until you look at what we already have on the market and what is coming. Earlier this year, Microsoft launched the Xbox One S which supports 4K video streaming and Blu-Ray, and supports HDR gaming. And it's only $299. Already, the PS4 Pro is being beaten here. For $100 less than the PS4 Pro, you can get 4K Blu-Ray (which the Pro doesn't even have) and HDR gaming.

Now you may be saying, "but what about 4K gaming? The Xbox One S can't do that!" The Project Scorpio which will also have an 8-core processor, but will also have a GPU that puts out 6 TFLOPS and support true 4K output. The PS4 Pro can't output true 4K. It uses a new form of rendering called checkerboard rendering which allows it to upscale its images to 4K, but not put out a true 4K image. Upscaled 4K is not as good as true 4K. Once again, the PS4 Pro comes up short. Now all of that makes it sound like there isn't any good in these products. There are some good things about them. The PS VR is still the cheapest VR headset on the market right now and the PS4 Pro will be delivering the best console experience available at the time when it releases next month. The issue is that the benefits that they present just don't outweigh the drawbacks. Both of these products just seem too niche for the common gaming market to be a success.

What do you all think? Am I just being a pessimist? Let me know in the comments!