Celebrate Halloween with Mysterium: A Board Game Review

Mysterium is a co-op Clue like game perfect for Halloween celebrations.
by Glitchieetv

Halloween celebrations are starting. Parties, costumes, candy and treats are all around. What better way to join the fun then with a spooky board game? Mysterium is just that! For 2-7 players ages ten and older, this co-op game will add that final touch to make any gathering magical.

What is the backstory you ask? Simple. You and your friends have gathered at the Mysterium mansion on Samhain. The kicker? You are all psychics, meeting to solve a murder that occurred at the mansion. Up to 6 of the players will pick a psychic to represent them. One of the players must play as the ghost. The game can be played with only 2-3 players due to changing the rules a bit, but it is much more fun when playing with 4-7 people. 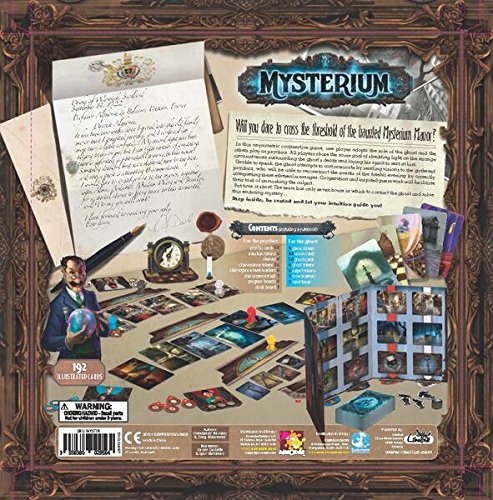 If this is starting to sound like Clue, well it basically is. The ghost is tasked with giving clues to the psychics. Then based off those clues, which can be very cryptic, the psychics talk among themselves. The way to win is for all psychics to make it to the final stage within 7 turns. If not, the ghost fades and everyone loses.

The hardest part of this game is being the ghost. The clues are random images that can be taken various ways. Not only are they cryptic, as stated above, but people think differently. The key to overcoming this is listening to the other players as they discuss the clues you give them to see how they are thinking.

The most impressive feature of Mysterium is the art. The art is simply gorgeous. From the angular features of various would-be killers to the Gothic architecture of the rooms, the whole set is covered in magnificent art.

Overall, Mysterium is a fun, spooky board game. Add it to your Halloween traditions for the whole family. Toss on some Halloween music, gather your friends, sit down to solve a murder and have some fun.

Our Rating
8
Mysterium is a co-op Clue like game perfect for Halloween celebrations.
Reviewed On: Board Games
What Our Ratings Mean