GTA 5 Mt. Chiliad Mystery: Theories and everything we've figured out so far

Does GTA 5 really hold a mystery inside Mt. Chiliad or are Rockstar huge trolls? Here are some popular theories.
by Ford James

Grand Theft Auto 5 released just under two years ago on the Xbox 360 and PlayStation 3 to huge critical acclaim, receiving a 97/100 MetaScore alongside 9 and 10/10’s nearly across the board.

Ever since launch week, players have been trying to resolve the supposed mystery behind Mount Chiliad, the highest peak in all of San Andreas.

A telescope viewing platform near the peak of Mt. Chiliad was the trigger to this ongoing investigation, as it has the phrase “Come back when your story is complete.” Just a short walk away in the ski lift shed is a mural depicting three objects: a UFO, a jetpack, and an egg. It is commonly believed that they are the three rewards players receive for completing whatever it is Rockstar want us to do.

The mural found atop Mt. Chiliad

It’s commonly known that it’s possible to discover four UFO’s in-game, three of which require 100% completion. The one that doesn’t is submerged and wrecked, in the murky waters north of San Andreas. The others are located in the sky: one above Fort Zancudo, one by Sandy Shores, and the other above Mt. Chiliad itself - although it requires cloudy weather conditions and the time to be 03:00 before it will appear. If you want to discover and experience these unexplained events yourself, you can read more here.

I’ve been avidly following the mystery over at /r/ChiliadMystery, a subreddit entirely dedicated to solving the puzzle. Redditors are constantly posting new theories and discoveries every single day, it’s hard not to be impressed. As there have been a lot of news and theories posted over the past two years, let’s take a look at the theories with the most substance.

Are there specific conditions to load the UFO interiors?

In one of the most recent big discoveries and currently the second top post on the subreddit, a Redditor that goes by the username trainwreck42o broke down the UFO script and revealed some potentially crucial secrets. You can find the full breakdown and his thoughts here, but in summary: there ARE UFO interiors that can load and he discovered that, to do so, a specific variable must be set to either -1 or 999, however, he’s not sure which variable it is. Perhaps the biggest thing to take away from trainwreck42o’s discovery is that you cannot be injured while viewing the UFO to trigger the sequences detailed in his post. The only thing left, if we are embarking down the right trail, is to find the correct warp points to teleport inside the UFO.

Franklin taking a selfie with the Mt. Chiliad UFO

Wearing the Epsilon Robes may lead to undiscovered content

Reddit user DC_Millions delved into the code behind the Epsilon Robes, code which is nearly 1000 pages long. That’s a lot of code for what is simply an outfit and a single quest line. Here’s the full post by DC_Millions, although it’s not formatted fantastically so I’ll summarise what he found here.

First off, he’s convinced there’s at the very least one phone call and one conversation that nobody has managed to trigger so far while wearing the robes. The comments seem certain this is due to the part of the quest where you have to wear the robes for ten days straight; most people simply sleep through it rather than playing the game like normal, eliminating all chances of triggering an event.

There’s also a line of code that checks if the player is planting a bomb which is undoubtedly a unique event. Finally, Marnie Allen, an NPC who is a member of the Epsilon Program, is mentioned specifically whereas other NPC’s aren’t, which obviously implies she’s got something to do with it all.

The cracked Maze Bank Fountain is the egg

Reddit user Huge_Dabs has either sussed out the egg on the mural, or found a very striking coincidence.

“And so, we have speculated this was the "egg" for a long time...and now I have PLAUSIBLE PROOF. I have studied some sacred geometry in the past, and I can NOT believe I didn't catch this.”

He goes on to explain how the Egg of Life and the Maze Bank Fountain look identical, and the crack in the fountain is an indication of its relevance to the mural egg. It’s far fetched but definitely plausible. You can find his full post here. The fountain and the egg do bear a striking resemblance

Radio towers and dishes may have link to Chiliad glyphs

User LlamaGuy69 thinks he’s stumbled upon something huge. Although it was submitted over a year and a half ago, nobody has managed to debunk it. One of the glyphs in the game, of which there are plenty, seems to point toward a radio tower in Sandy Shores. A unique one at that, as it’s the only one of that type to have a viewing platform that you can climb up to. 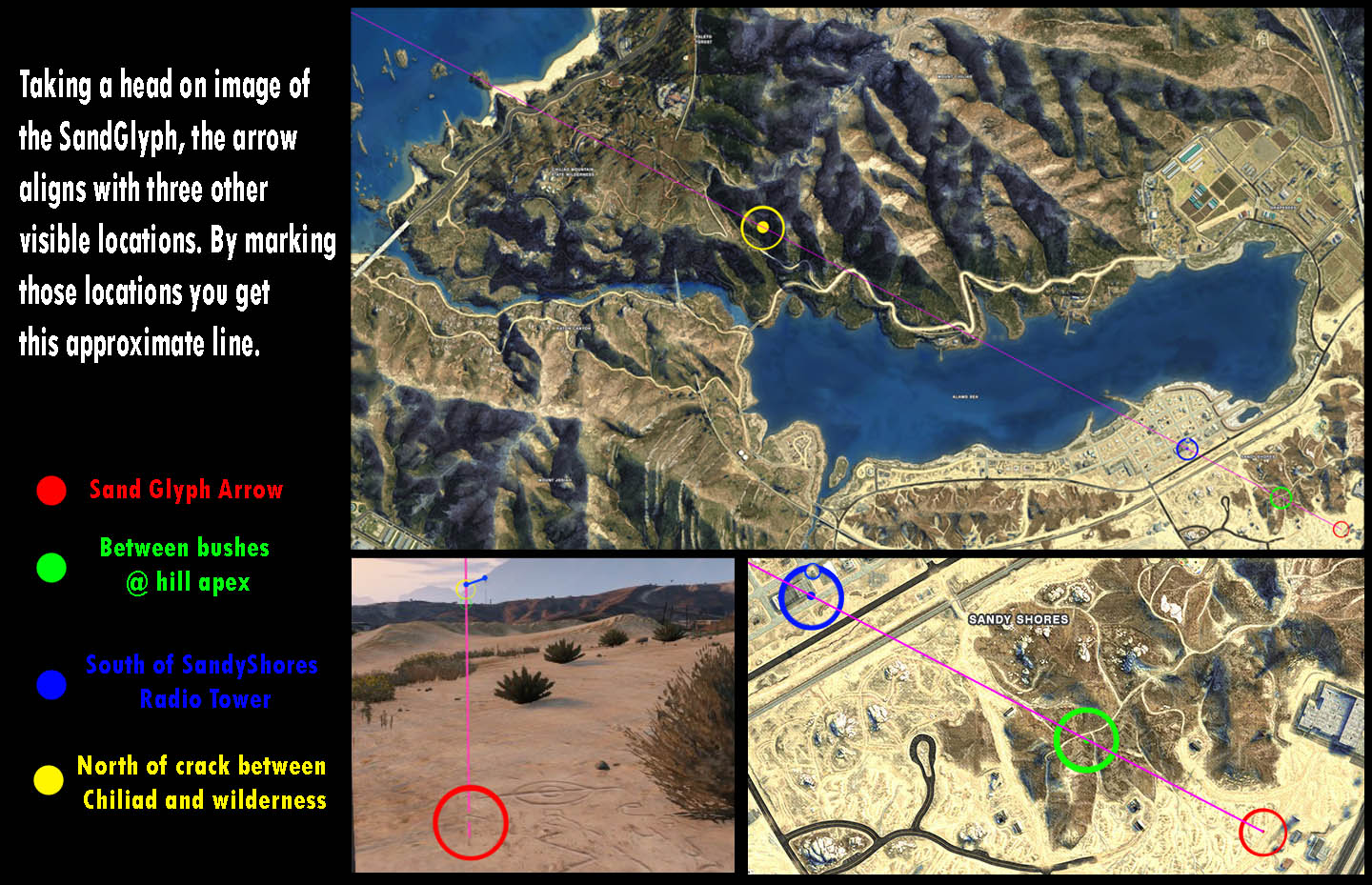 Mount Gordo and the hippy camp

Now-deleted user Zukitronic is dead set on proving a connection between the hippy camp and all of it’s glyphs and yoga practicing hippies, and Mount Gordo, Mount Chiliad’s baby brother. This is a lengthy post which you can read for yourself here; I’ll highlight the important parts:

First off, there are two glyphs on either side of the hippy camp: one depicting an eye above a crescent moon, the other showing the eye atop a rain cloud. Both are only seen in one other place; the face of Mount Chiliad.

The hippy camp is also home to the aforementioned yoga practicing hippies, nearby to the rain glyph. They are then close to a unique-looking dead tree, and -down a snaking staircase from there- is a station wagon with a small UFO attached to the top, which has a striking resemblance to the Space Docker; a vehicle reward for finding all of the missing UFO parts dotted across San Andreas.

The Space Docker in all it's glory

Zukitronic then goes on to link the hippy camp to Mount Gordo, as the only two places Michael can actually do yoga are his house, and the peak of Mount Gordo. He then mentions a third glyph at the hippy camp, the same one noticed by tacotacoman1, that looks like a radio tower. Although Zukitronic views it differently; he reckons it’s a mountain, with the zigzag line being a path up the mountain toward a hut on the top.

“Now, with these facts in place, ALLOW ME TO BLOW YOUR MIND.”

Zukitronic finally details a journey he went on, up the eastern side of Mount Gordo. As he ascended, he noticed a lot of dead trees, very similar to the one by the hippy camp. The further he climbed, the worse the weather became, until he reached the top and found a square building with a radio antenna. Descending down the western side led to more dead trees and the weather clearing up again, plus a station wagon eerily similar to the one at the hippy camp, minus the mini UFO.

This could be an entirely different mystery entirely; the Mount Gordo Mystery (Chiliad, get off your high horse!) Or it could be absolutely nothing, but I’d much prefer the former to be true. A lot of other users carried on the discussion and investigation in the comments, but I’ll leave those to you. 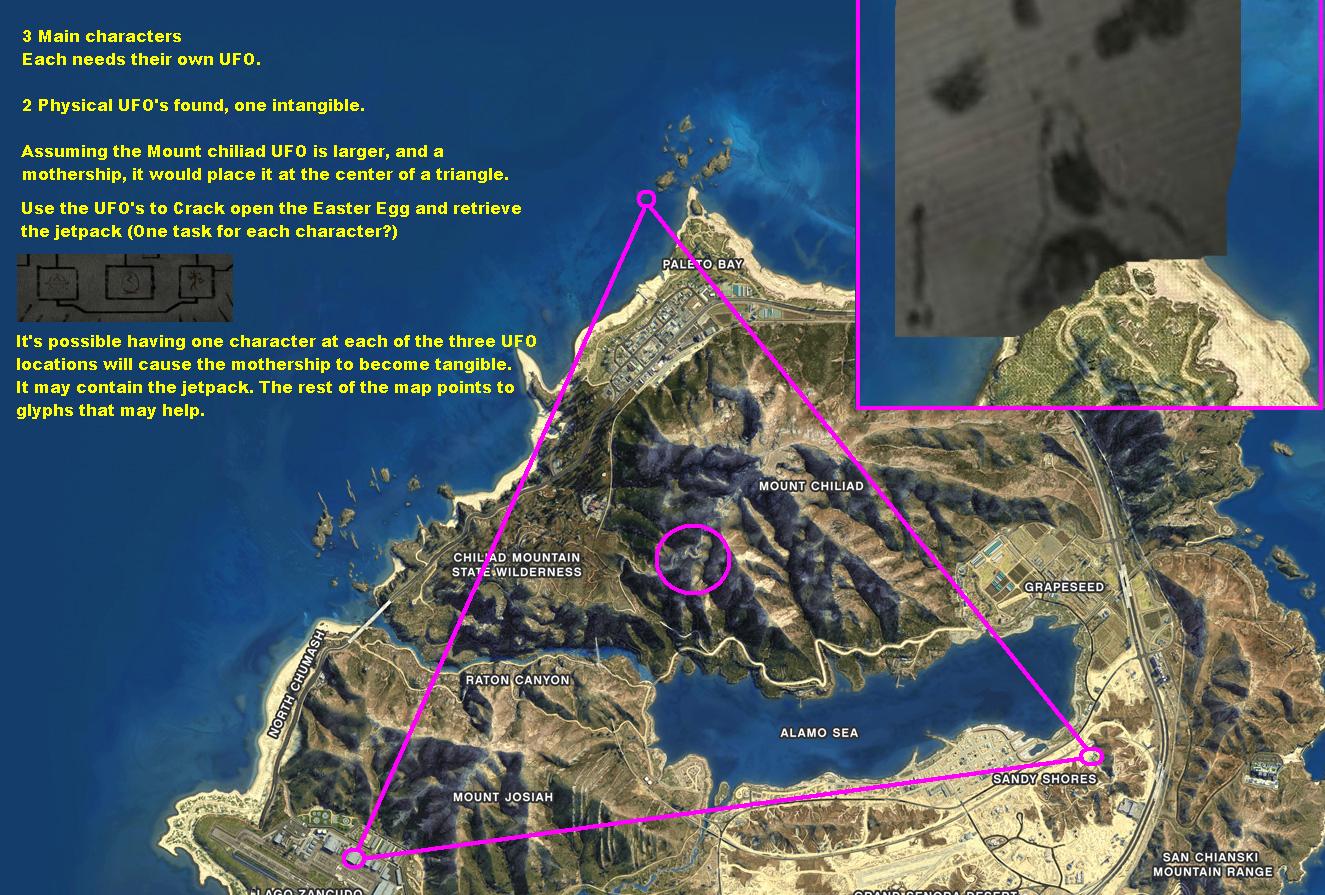 One of the very first images made to crack the mystery

What do you guys make of the infamous Chiliad Mystery? Is Rockstar just elaborately trolling us or is there really something hidden either inside the UFOs or Mount Chiliad? There’s a lot of clues linking to it being true and I bet the Rockstar executives are having a good old giggle watching us fail to solve it for nearly two years.

The frozen alien in North Yankton, the Space Docker, the UFOs, the glyphs, the hidden code all point towards an undiscovered treasure. A lot of users are trying to position the Mount Chiliad mural over the map to discover specific locations, but what if that’s actually showing what’s inside the mountain, like a fortified bunker? Will we ever know?

I’ve focused on only a few of the theories and discussions on /r/ChiliadMystery. If you want to delve deeper into the rabbit hole yourself, here are a few more interesting ideas and reads: