Seasons After Fall: A Flawed Yet Masterful Composition

Seasons After Fall is a flawed, yet masterfully executed symphony.
by Angelina Bonilla

Seasons After Fall is a puzzle-platformer that was developed by Swing Swing Submarine and published by Focus Home Interactive. It focuses on a mysterious “seed” who possesses a fox in order to help gather the abilities to manipulate each season from each of the “guardians”.

If you notice I’m being vague, well that’s on purpose because the more I tell you about this game, the more I’d be spoiling for you overall and I don’t want to do that. -- Oh, you also bark a lot as a cute little fox and run through the forest, I can tell you that much since that doesn't spoiling anything.

The game revolves around you gaining the abilities of the guardians and using each season to your advantage. More often than not, you’ll need to change the season at least once in order to solve a puzzle. The puzzles start out simple but get progressively harder as you progress throughout the story. Most of this mystical tale is told by an unreliable narrator, so it’s left up to you to figure certain things out.

After all, you are a fox; try to use your quick wit in order to solve these difficult problems.  Well, you don’t need to be quick per say. There’s no way to die in this game other than falling into some pits in various part of certain levels. Even then though, it’s not like you get a game over, you just get sent back to a check point.

This isn’t the sort of game that’s meant to be a challenging puzzle-platformer, it’s the sort of game that wants you to experience what it has to offer, in all its beauty and splendor. Well, for the most part, there’s a section near the end of the game involving fireflies that has had multiple walkthroughs dedicated to it.

Imagine a game that goes out of its way to impress you with art direction, music and atmosphere, trying to enthrall you in the world it built. That’s what Seasons After Fall does, a game that’s been in production since 2012. Every piece of the world is like an elegant brushstroke across a canvas and that seems to be what the art design was going for. It’s as though it’s a watercolor painting just ready to be framed with every new area you find yourself in -- Whenever you change a season, the colors just pop from the screen, changing the entire scene down to letter.

No stone is left unturned when you switch from Spring to Winter and everything gets blanketed in white, powdery, snow, giving you the ability to walk across frozen water.  Some puzzles need to be solved with multiple seasons in mind, like raising the water levels in spring and making them dry up in the Summer, they’re simple and little touches like that, things that actually happen during the seasons that help make this world what it is.

It also helps that the Fox, the creature you control, does act and move like a fox, even when you’re not in direct control of it. The designers skillfully used its body language to imply that the fox knows a lot more about the story and this world than its letting on.  It also helps that everything you do is accompanied by a wonderful string orchestra that deserves a rousing round of applause for the work they did on this.

Seasons After Fall manages to make itself a living, breathing world by the player’s interactions with it. Prior to your exploration, the world seems stagnant, almost morose. Once you go into a level however, it all starts to come to life, with every action you take changing the world around you in some way. No, it’s not some sort of moral choices, but it’s more environmental choices.

The environment is your canvas and every time you change it is you dipping your brush into the paint and painting.  Life blooms because you’re there to help kick start it, which isn’t something done very often outside of niche indie titles it seems.

There are a few quirks to Seasons After Fall that, depending on who you ask, either benefit it or not, most of which involving the overarching narrative. It has a case of the “Return of the King” where there are several “possible endings” that fake you out into not being the true ending of the game.

The first one was predictable, but later on it gets to the point where it could potentially be grating for some players. Especially considering the fact that game is aware of this possible narrative folly and goes “I’m not done yet” or “Your story isn’t finished yet.” I myself only took issue with it when the game had seemingly reached its climax when it turned out it wasn’t done at all. It did get to the point where asking “are we there yet” would have been a good achievement to earn in Steam. 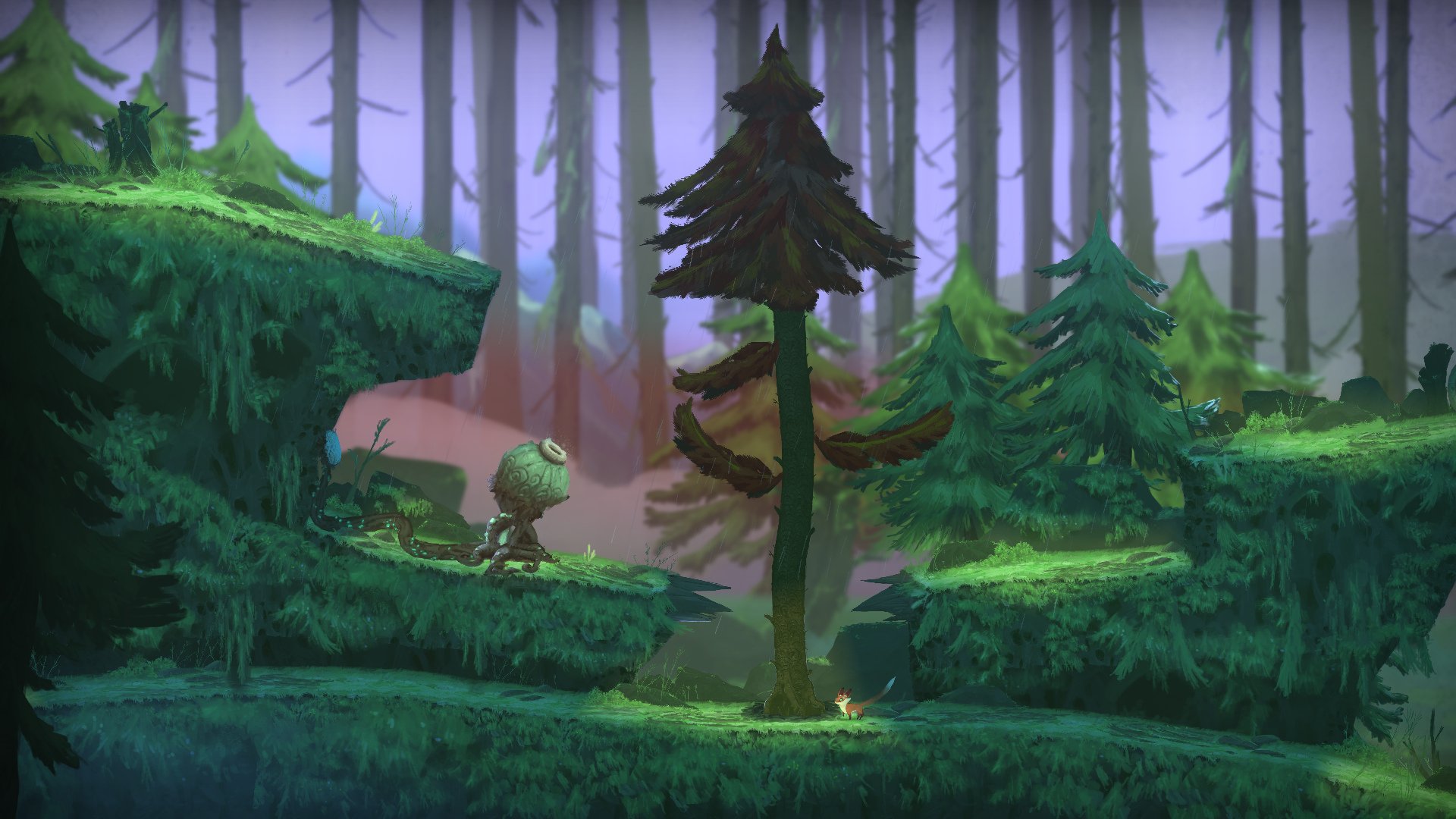 Interestingly enough, the game only tells you half of the story and expects you to go find the other half thrown throughout the wilderness which works for the most part. The story was very linear, go from point A to B learn the story, understand the thing you need to understand.

Then it gives you a similar system where you learn the overall story, but you need to take a magical journey into the underbelly of each level in order to get the important bits and pieces of the backstory, which gives our thinly veiled antagonist a solid motivation for doing the things that they do.

This works in theory, it worked in Transistor and Bastion quite well. However, with Seasons After Fall,  the antagonistic force resembles a petulant child. A child that has an air of “DON’T TELL ME WHAT TO DO” about themselves. This wouldn't be known without these extra bits of story, that are very much off the beaten path.

You can blaze through Transistor and still find important story bits if you turn slightly left or right, rather than going straight. In Seasons After Fall, you have to go out of your way in order to get important character motivations that would have been very useful to have interwoven in the main story, rather than slightly implied by tone.

Perturbing points aside, Seasons After Fall is a wonderful experience deserving of praise and adulation from all sides. Think of it as a flawed, yet still masterfully executed symphony that’s just puts itself out there for its audience, one that should be remembered throughout the ages for its composition and impact.

Our Rating
9
Seasons After Fall is a flawed, yet masterfully executed symphony.
Reviewed On: PC
What Our Ratings Mean