Holobunnies: Pause Cafe exists for the sole purpose to tide over Kickstarter backers -- and it does it does in the laziest way possible.
by Angelina Bonilla

It’s always interesting to see the development of a project prior to a game’s release, especially for a game like HoloBunnies: Pause Cafe. But this particular game has been in development for quite some time, being funded on Kickstarter just a few years ago. Honestly, I was starting to give up all hope that it was going to be released, figuring it was a game that had just fallen by the wayside like so many others.

However, Q-Bit Studios, the developers of HoloBunnies, went a different route than what was initially stated on their Kickstarter. Originally, the game had been a sort of metroidvania platformer, and while this game is still coming out, the developers decided that they’d release something to tide fans over in the interim -- a handful of minigames given the subtitle of Pause Cafe.

Is this game enough to satisfy the backers until the Kickstarter game's release in 2018?

Your mileage may vary on that. 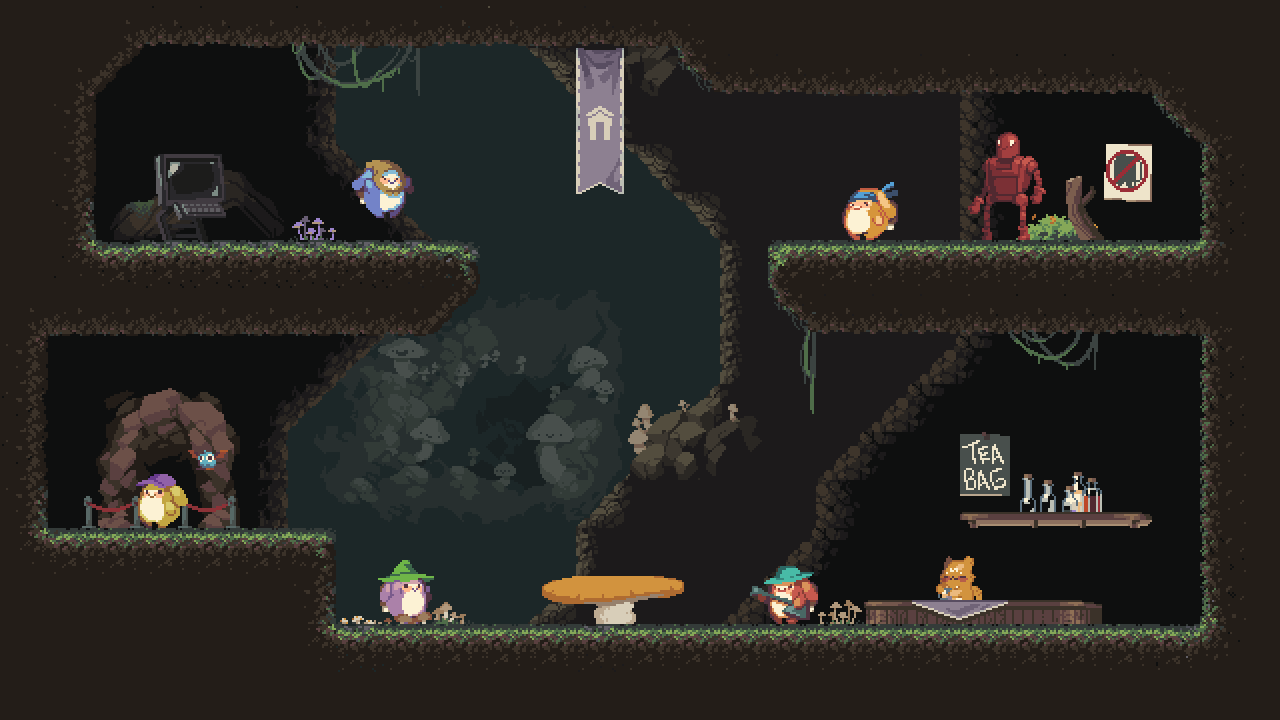 We are given three different mini-games in Pause Cafe: an endless runner, a boss rush, and a brawler. All of these try to be distinctive while remaining familiar to those who play games in those genres. The pixel art graphics are cute and fun, while the music is cheerful as well as catchy. And yet... something about it feels like you’re waiting in an elevator that will never get to its destination. Sure it smells nice, has a mahogany wood finish and plays elegantly composed

Sure it smells nice, has a mahogany wood finish, and plays elegantly-composed waiting music, but is it worth being stuck in there knowing the real deal is just a floor away?  You start out in the titular cafe itself, where you can talk to the other Bunnies who seem to be tired from an unseen adventure. That's great and all, but wouldn’t you have rather actually gone on the adventure? If your answer is yes, me too.

You start out in the titular cafe itself, where you can talk to the other Bunnies who seem to be tired from an unseen adventure. That's great and all, but wouldn’t you have rather actually gone on the adventure? If your answer is yes, you're not alone.

In the endless runner mode, you play as this strange little creature that seemingly doesn’t have anything to do with the HoloBunnies. You need to time your jumps perfectly and occasionally save the creatures that pop up during your run cycle. Wash, rinse, repeat.

The Brawler mode is essentially an out-and-out melee with the other bunnies, each having their own distinctive abilities that are very unique and creative. Their attacks range from magical to musical, with each character feeling and playing different from the other, despite the fact that they’re all bunnies. The brawls can be fast paced and vicious or slow and methodical depending on the character you choose and your personal playstyle, which is nice. It shows the potential this game had as an action platformer.

Lastly, there’s the boss rush, which puts your skills to the test, making you learn each individual bunny's playstyle and test it against their natural match when it comes to the boss fights. Each bunny is paired with the bosses splendidly, and it gives us a chance to see their abilities in action.

For example, Danielle’s healing counters the massive amounts of damage you take from the Shepherd of Fire and Mephisto’s dodging ability negates the onslaught of otherwise unavoidable icicles that rain down from the ceiling in Kurglabos’ boss fight. The characters and their respective bosses work organically to create exciting boss fights, making you itch for more, but all you can do is try to defeat the bosses in a shorter amount of time, rather than progressing to a new set of boss creatures or something of that nature. It’s a nice promise of things to come, but is limited for now.

Unfortunately, I find myself wanting more from these developers, and not in a good way. This delivery, while solid in many areas, is also lackluster in others. You can tell it was gutted from the original project in order to quell the masses who supported this game on Kickstarter, rather than bridging the gap between the two games. I could very well be acting too cynical here because I did have fun with the game, but it just doesn't feel like enough.

More mini games, more challenges, progressively harder difficulties, variations in boss tactics, and more could have been added. It’s like I went to the store to buy Oreo cookies and the only pack they had left was the one that’s been on the shelf since 2005. I know the developers are planning on adding more content, which is great given the current price tag, but in many ways, the game is a shell of what it could have been. And if there’s one thing that makes me sad is lost potential.

Our Rating
5
Holobunnies: Pause Cafe exists for the sole purpose to tide over Kickstarter backers -- and it does it does in the laziest way possible.
Reviewed On: PC
What Our Ratings Mean