Star Wars: The Old Republic 'Rewards' Players with the Equivalent of Pocket Lint and Temporary Tattoos

The Old Republic has been a hive of scum and villainy for two years now. If you've stuck around that long there are some cheesy trinkets coming your way for being a loyal part of that galaxy far, far away.
by Eli "The Mad Man" Shayotovich

It's already been two years since Star Wars: The Old Republic launched, and if you've stuck around (like me) during the highs and lows, you're in line for some rewards. Just don't expect them to be on par with what Han Solo got for rescuing the Princess.

I love Star Wars, and despite the vitriol from the denizens of the Internet, I really enjoy the MMO that is The Old Republic. That could be because I don't go ape shit over every little perceived injustice, and unlike many most gamers, I don't finish off a game inside of a month of its release, and then bitch about (fill in the blank). Hell, I still haven't played a single SW:TOR character to the level cap, an unachieved goal I chalk up to there being too damn many video games on the market.

Every once in a while, though, something gets the old "Mad Man" riled up, and I have to say something. Blame it on Monday.

So, Bioware... I am looking a gift Tauntaun straight in the mouth and asking out loud: "Fireworks and paint jobs?" Two years of loyalty and all we get is some cheesy bling? 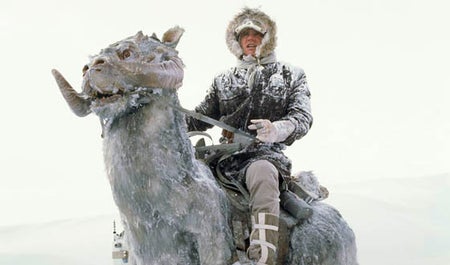 I don't even know where to begin with the fireworks. What the hell am I supposed to do with these things? Fire them into the air and do what, exactly? Dance around like a pack of silly Ewoks? Fireworks. Really? I... oh nevermind.

As for the "exclusive" fighter paint jobs, well... at least they aren't fireworks. After spending some time with the newly released (to subscribers) Galactic Starfighter expansion (review coming soon), things move so damn fast that seeing these temporary tattoos is impossible. If you're staring at the colors on someone's ship, you sure as hell aren't playing the game.

These aren't even "rewards" as much as something you'd find in aisle 11 of the Galactic Goodwill. Way in the back beside the bathrooms.

No offense, guys, but these "rewards" are literally meaningless. If you never gave them to me in the first place I wouldn't miss them. Fact is, I probably won't even claim them from my in-game mailbox, let alone use them.

Now I know what Han felt like after getting betrayed by Lando. Okay, maybe not that jilted, but still... this is about as lame as the introduction of Jar Jar Binks to the Star Wars canon.