BoI is the perfect mix of creepy, fun, difficulty, and adictiveness. Definitely worth a try.
by Ford James

The Binding of Isaac is an indie game for PC developed by Edmund McMillen and Florian Himsl, based loosely around the biblical tale under the same name. It is a 2D top-down rogue-like game, with an interesting, yet odd plotline to say the least:

Your character is a naked, crying child named Isaac who has to flee in to his basement, as his mother was instructed by God to take the life of her child to prove her faith.

It has been compared to other popular arcade-like games such as Super Meat Boy and The Legend of Zelda.

One of the most notable features about Isaac's adventures in his basement is the unique graphic style used. It's very cartoon-like, very similar to a child's drawing, but it also has a lot of gore and is detailed in its violence. A common reaction to this would generally be a shocked one, however it suits the style of game rather well, due to the endless variety of monsters, freaks, and demented brothers and sisters you meet and have to battle within the many levels of the basement. 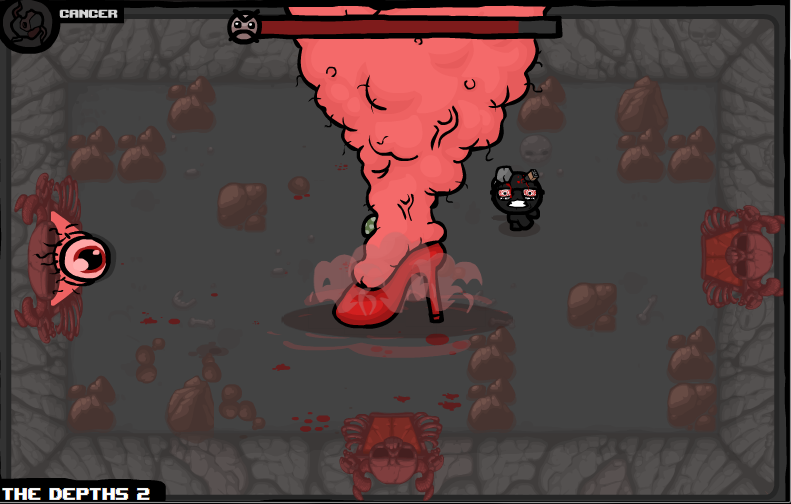 Isaac's encounters may turn many casual gamers away after the first few attempts at overcoming the vile enemies, due to it being an extremely difficult game, however it is possible to discover various power ups and items that will help you to defeat them and progress further, such as 'Mom's Bra', a Battery and a Bucket of Lard, each has a unique bonus or boost for Isaac. These become more and more necessary as you progress, as the mere tears projected out of Isaac's eyes and the single bomb you start with aren't as effective as they may appear.

The Binding of Isaac is a game which will punish you harshly for failing; as soon as you die, that's game over. You have to start right from the very beginning. It takes a lot of getting used to if you want to progress further than the first level. Although this makes the game sound quite repetitive, it is quite the opposite, as each floor is generated randomly every playthrough: new enemies in each room, new items to find, new room layouts, everything. You could end up being lucky, and finding a secret item instantly in one of the first few rooms, or you could come up against one of Isaac's seven deadly siblings, such as Lust, Gluttony, and Wrath. Combined with the interesting graphic style, the creepy, low-budget sounds used create quite an immersive atmosphere, which plays along nicely with the plotline. The fluency of Isaac's movements and his shooting also helps to evolve the feel of the game, and really helps create smooth and enjoyable gameplay.

It's highly recommended that when you pick up the game, that you buy the lone piece of DLC for it called "Wrath of the Lamb" too. WotL makes the game a lot harder, however it also adds a lot more content. The ideal situation for a newcomer to the game would be to buy both the game and the expansion at the same time when it goes on sale, but only install the main game first so you can get used to the concept and how it works. Once you feel comfortable with the game, then you can go ahead and install WotL which just improves every aspect of the game.

Overall, BoI is a unique experience for casual and hardcore gamers alike. I really don't believe there has been another game quite like it, McMillen and Himsl have really managed to create another game equally as good as their popular Super Meat Boy. I don't think you can go wrong with its bargain price of £3.99 on Steam, and it often goes on sale for 75% off, so you really can't miss out on this fantastic experience. I give The Binding of Isaac a strong 8/10, well done to McMillen and Himsl.

Our Rating
8
BoI is the perfect mix of creepy, fun, difficulty, and adictiveness. Definitely worth a try.

The Binding of Issac Articles
more »