Batman: Arkham Knight has a three part ending that you have to unlock piece by piece, but the first part may be the only one that's worth the effort.
by Sam Yoo

I recently just beat 'Arkham Knight' and by 'beat,' I really do mean beat.

I ended the game with ~95% completion, and that’s more than enough to set off the game’s chain reaction of endings.

According to Tassi, the game has a three stage ending that must be unlocked.  He makes it clear that this is different from a multiple choice ending like Mass Effect 3.  In the case of Batman: Arkham Knight:

Everyone has the same one, but you'll only unlock different pieces of it if you complete enough of the game.

As a result, the game encourages you to finish all of the side-quest chains and extra content.

Tassi admits that it may not be worth your time, however.

Stage 1 - The identity of the Arkham Knight

This first part is the story ending that resolves the mystery of the game's titular character, the Arkham Knight.

This antithetical version of Batman that uses firearms and kills with ease is one of the primary antagonists of the game and is a complete unknown to everyone, including Bruce as Alfred's research continuously turns up nothing for the duration of the game.

A completely original character that we have designed at Rocksteady in collaboration with DC Comics.

As the reveal shows us, this was a bit of an exaggeration.  Tassi points out that he, and probably most Batman fans, saw it coming the moment when:

During a main mission about two-thirds of the way through the story, the in-my-head Joker taunted Batman by showing him an elaborate flashback about when he executed Jason Todd, Batman’s second Robin.

The death of the second Robin, Jason Todd, is perhaps one of the most memorable incidents in Batman's history.  In the "A Death in the Family" story arc (Batman #426-429, published in 1988-1989), the Joker murdered Jason Todd.

Years later, Jason was resurrected.  He soon found out that Bruce had let the Joker live, and had not tried to avenge Jason's death.  His subsequent rage against Batman ultimately pushed him to take on the mantle of the Red Hood with plans to kill both the Joker and Batman.

Art from Under the Red Hood, the animated feature of Jason Todd's story arc

The ending of Batman: Arkham Knight is essentially the same, with different details, Tassi says.

The Arkham Knight is a twisted variant of the Red Hood. Joker reveals that he simply brainwashed Todd and didn’t kill him, and in the game, Todd wants quite literally nothing but to see Batman suffer and eventually die.

Batman convinces Todd he can be redeemed, and he intervenes to help later in the game after Scarecrow unmasks Batman as Bruce Wayne for the world to see.

Tassi says that while Batman fans may be disappointed by this somewhat unoriginal ending reveal, the inclusion of Jason Todd's story in Batman: Arkham Knight fits in very well with the story.  It is a strong conclusion to the game.

Upon completion of all side-quest chains, you unlock the second stage ofthe ending where Bruce puts the 'Knightfall Protocol' into motion.

This consists of Bruce Wayne (having been outed as Batman) going into his mansion, and then 'dying' in a massive explosion in front of a crowd of reporters.

“And this is how the Batman died,” said Jim Gordon.

Tassi says that he actually wishes he hadn't even bothered with the Knightfall Protocol as he found it very dissatisfying:

Yes, this isn’t the first time a hero’s faked his death, but in the context of the game we just finished, it makes no sense. He just…really, really likes his privacy? I get that all the criminals are now locked up, but they always escape, so why do this?

The final, 'real' ending consists of a long cutscene of Gordon narrating about how Gotham is without Batman.

Cut to a scene of two muggers attacking a couple that bears an extreme resemblance to Thomas and Martha Wayne.

A shadow appears on top of a nearby building, looking like Batman from a distance.  The muggers jeer at it, saying 'Batman is dead' and that they aren't afraid anymore.

Then the shadow explodes into a demonic bat shape, looking very much like a Scarecrow fear toxin nightmare.  The muggers scream, terrified. 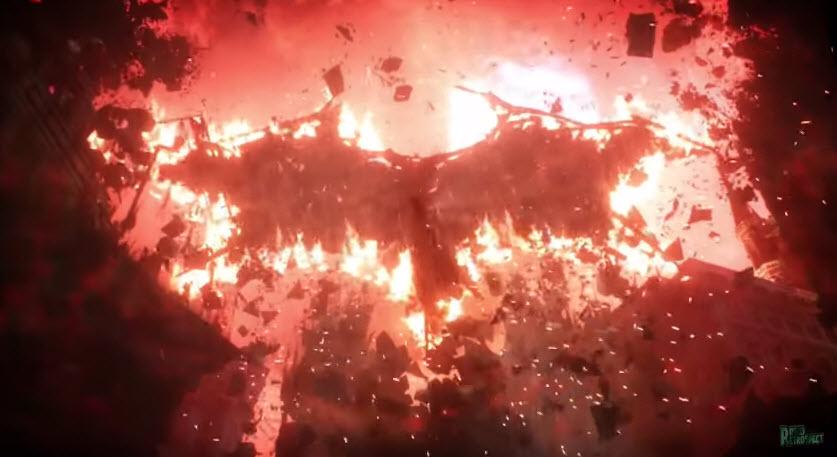 It’s a purposefully ambiguous ending, which is somewhat expected as Rocksteady doesn’t seem like they’ll come back to this series any time soon.

Either Wayne returned as Batman and the robbers were simply seeing manifestations of their own fears of the caped crusader, or someone, either Wayne or a new player, is actually using Scarecrow fear toxin to control the criminal population.

Tassi expresses some more of his disappointment:

Honestly, the final two stages of the ending aren’t really necessary, and could have been handled better if they did need to exist.

He does reiterate that he liked the first stage of the ending and that the Arkham Knight/Red Hood storyline was well executed, so at the very least the conclusion to the game is 1/3 satisfactory which is certainly better than nothing.