A wild Pokemon 3D fighting game appeared. Catch it with a Poke-ball!
by TumsST

Pokken Tournament, the Pokémon fighting game most Pokémon trainers have been waiting for, had information revealed during the Famitsu video stream. A lot of information was revealed about the 3D Pokémon fighting game that people didn't expect to hear until later in the year, if they were lucky. No word yet if the game is going to release anywhere other than Japan at this time. 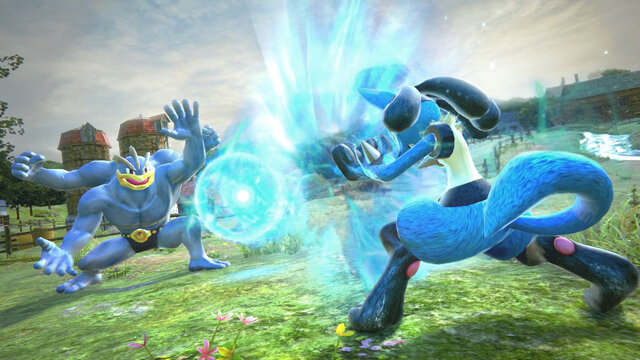 A fighting game needs fighters and the news today revealed a few for Pokken Tournament. Suicune and Gardevoir were revealed as playable fighters and everyone's favorite electric mouse Pokémon, Pikachu, was also revealed to be a fighter. They join Machamp and Lucario as fighters that were already revealed. You'll also be able to use "support" Pokémon, similar to a partner in the Marvel/Capcom fighting games that can be called in while you battle to help the cause. Snivy and Lapras are just two of the support Pokémon that can be used in battle to aid your fight.

Pokken Tournament will first be released in arcades in Japan and eventually it should be released for the Wii U. The game uses a special controller with a directional pad and A/B/X/Y buttons used to attack. It sounds like the game plays like a typical fighting game where you have weak attacks, strong attacks, as well as super-powered "burst" attacks or special attacks. You'll be able to Mega evolve through means of storing energy.

Japan will have demos going in arcades for about 100 yen next week so if you're in Japan, try and give the game a test run. Bandai Namco is working on Pokken Tournament and I think they know a thing or two about fighting games as well as bringing Anime franchises into the fighting-game universe such as Dragon Ball Z. Just let me fight as my favorite Pokémon, Squirtle, and everything else will work itself out!