Bloodstained: Thirsting for a Wii U Near You

Bloodstained: Ritual of the Night needs a Wii U Port. Back, back, back it up! *on Kickstarter
by KungFro

Koji "IGA" Igarashi, the driving force behind the Castlevania series for many years, turned to Kickstarter for funding his newest installment in the Metroidvania genre. The game is titled Bloodstained: Ritual of the Night and, unsurprisingly, its campaign has raked in more than quintuple the requested $500,000 in funding. Still, here's the reason any Nintendo fans may be hoping it remains on the rise.

A minor refresher, Castlevania: Symphony of the Night was realeased in 1997. Almost two decades of experience later, Igarashi is no longer a creative lead at Konami, though his departure from the corporation this past year was a hopeful one. Now free to channel his talents as he sees fit, he has pursued a fresh spin on the genre he is known for. Bloodstained is the result. Being developed by Inti Creates – a co-developer of Keiji Inafune's Mighty No. 9, which also had a massively succesful campaign on Kickstarter – Igarashi's project is highly promising, to say the least. Unfortunately, as it stands, it will only be coming to Xbox One, PlayStation 4, and PC. That is, unless the project hits $3 million in funding. 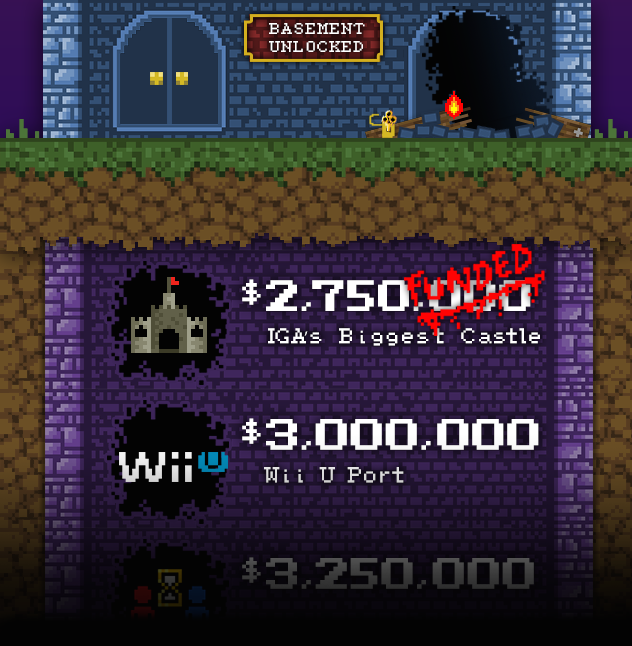 Armature Studio, founded by "a team of key developers from the Metroid Prime franchise," have gladly taken on devoloping a Wii U version of Bloodstained if said stretch goal is met. Worry not though, for this goal is sitting just over $150,000 of being a reality and with 15 days left to go.

It's all up to the backers, so... *ahem* ALL BACKERS ASSEMBLE! Whether you're a fan of Nintendo, Metroidvania-style games, or just IGA himself, the power is yours. Thanks for reading! And a thank you from Igarashi-sama ~