No Man's Sky has been seen as a repetitive money grab, but it is a game more about reaching out to the stars, literally.
by chopchamen

No Man's Sky is a game all about exploring and upgrading. You can travel by foot, by air, or even space, and collect resources. There isn't really much of a story to follow, but there is lore to be read in the game.

You start on a random planet in the universe next to a broken ship, you must gather resources to repair the ship and take off, your goal after that is to work toward the massive light in the center of the universe. To do so, you have to explore other massive worlds, sometimes moons and gather blueprints and more resources to upgrade your ship and make it capable of jumping to different solar systems until you reach whatever might be awaiting you in the middle.

Each of the eighteen quintillion planets are procedurally generated, as is pretty much all of the wildlife, so while you may see things that look almost exactly the same, that's kind of to be expected, on the contrary there is also an explosion of variety. Is there a lot to do?

It depends on what peaks your interest. Within a virtually infinite universe, you can fly in different solar systems blowing up asteroids, or pirating cargo ships, maybe have dog fights with other ships. The travel time between different planets can be extensive, your ship is capable of multiple speeds, but even on the max speed it can take minutes of flying straight to finally get to your destination. When you decide to enter a planet, you break through the atmosphere in real time, no loading, and suddenly you're flying just above the valleys and hills.

On a planet there can be plenty to do, however seeing as it's all about exploration, it can feel like a wild goose chase just to get ahead on certain things. You can analyze different kinds of animals, plants, even rocks to earn extra currency, you can also have fun renaming and uploading the things you discover for everyone to see; including the planets, and solar systems. While exploring a planet there may be some extreme conditions such as burning or freezing temperatures, radiation, or storms. 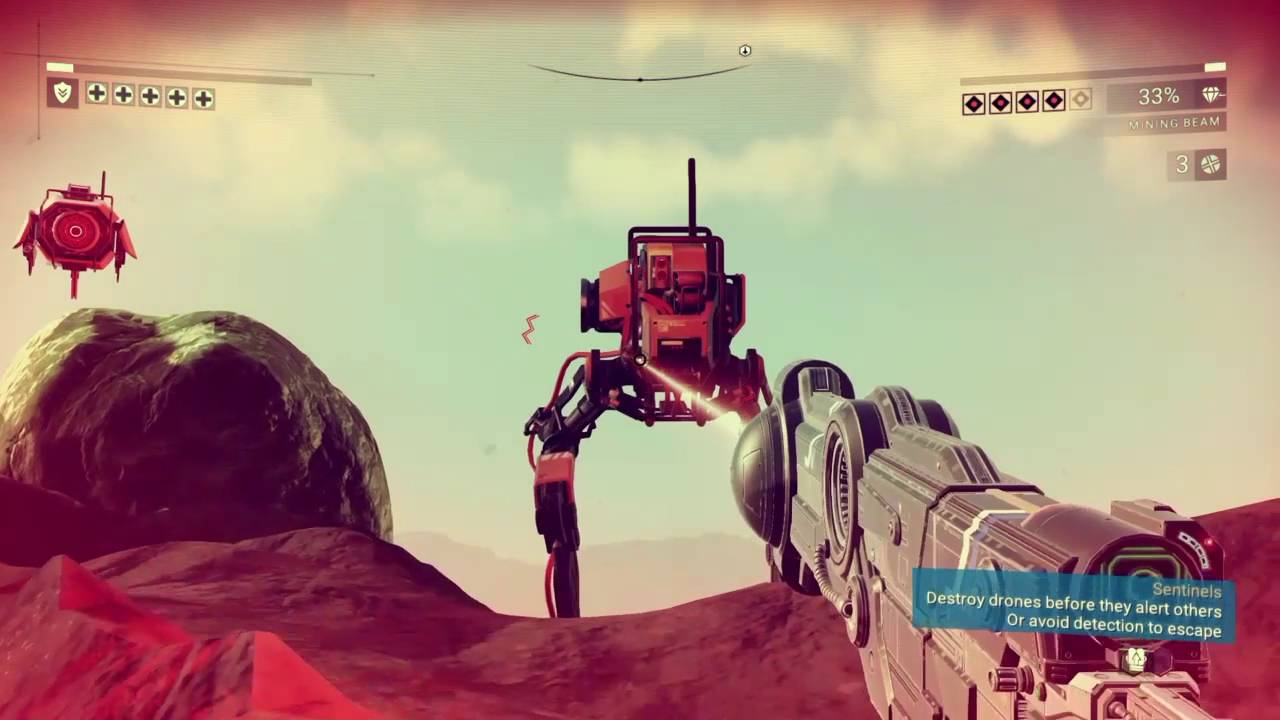 There are authorities, the sentinels, who attack you when you kill any wildlife unprovoked, mine too many resources, or start to break into a locked shelter. They come in 5 waves and they will even follow you off planet into space.

While you're fighting them, or any random scamper that tries to attack you, you may notice that combat is a little weird, it's heavily dependent on auto aim which is only active on the upgrades that are meant for combat. Space combat is similar, while it's fairly easy fighting one or two enemies in space, if you have to fight any more than that then it's easy to lose.

After everything, nothing beats the experience of looking at a planet while floating in it's atmosphere and realizing just how big that planet is.

Can you dig in the terrain?

You can get certain upgrades for your weapon that allows you to dig in the terrain. however you can't dig super far downwards. It's seems to be more for damage, and blasting your way out of confusing cave systems, as you don't gain any kind of materials for your efforts.

No Man's Sky has a few sounds that may spike your curiosity, and make you want to explore your environment, but overall the sound work is average. There is nothing super special, however the music can be interesting, every song track is composed by 65daysofstatic, an electronic post/math rock band.

There are some weird things to see out there, such as a giraffe like creature with a slug face, or trees that look like giant leaves; there are many things to see that it almost feels like real nature. Visually, No Man's Sky can be quite beautiful, but at the same time it can be quite dull and barren, an issue inherent with procedural generation. As a result, some of the creatures can look funny, in some cases, their body parts clip into each other as they walk, or some of them just don't look quite right. On the other hand, the trees and plants are all fully three dimension, none of that corny 2D imagery. The lighting is terrific as well, some of the plants will even have a glow to them; that glow will actually hit the other objects, even the creatures.

No Man's Sky is definitely an experience worth some money and time -- unless you're not interested in games that require any kind of grinding, in that case this is not the game for you.

Our Rating
7
No Man's Sky has been seen as a repetitive money grab, but it is a game more about reaching out to the stars, literally.
Reviewed On: Playstation 4
What Our Ratings Mean