Very few games can talk about religion in a serious, respectful, and honest manner.
by Elijah Beahm

This article was previously posted, un-edited on my blog on Game Informer.

Spoilers for Dead Space 1-3 ahead!

To be clear, I am a professed Protestant Christian. While I subscribe to no particular sect, my religious belief is very important to me. Normally I've accepted that most developers retain a secular outlook for their games so as to not offend anyone, but in the process, I feel we're leaving a really important conversation out of the medium for fear of upsetting people.

We live in a world where religion is hotly debated as Atheists proclaim the end of religion as we know it while religious leaders become increasingly fundamentalist and conservative. Not addressing that conflict in games is a serious disservice to both secular and religious gamers. We want to hear about what's going on there, and if games are genuinely supposed to become art, they cannot always avoid controversy.

Dead Space manages to touch upon the majority of faith-related issues without even intending to.

Visceral Games (formerly EA Redwood) set out to make a game that had no overlay HUD and included dismemberment, stasis, and telekinesis in a horror setting. That's all they planned for, with a full description of the universe by the game's creator for the writers to take from as they would to develop an appropriate title. It became the survival shooter we've all come to know, spanning the twilight years of this console generation and even expanding onto mobile phones and the Wii. It was a success, all things considered, but most didn't really notice the potential underlying religious themes, save for one point. The anti-blind faith argument brought about by the game's main antagonistic agency The Church of Unitology.

The Church of Unitology is compared by many to the Church of Scientology. The organizations share similar traits, such as a more monetary focus for their organizations, secret society mentalities, suspicious conspiracies about what really goes on behind closed doors with suggestions of political and social manipulation. However, this is the tip of the iceberg with Unitology. 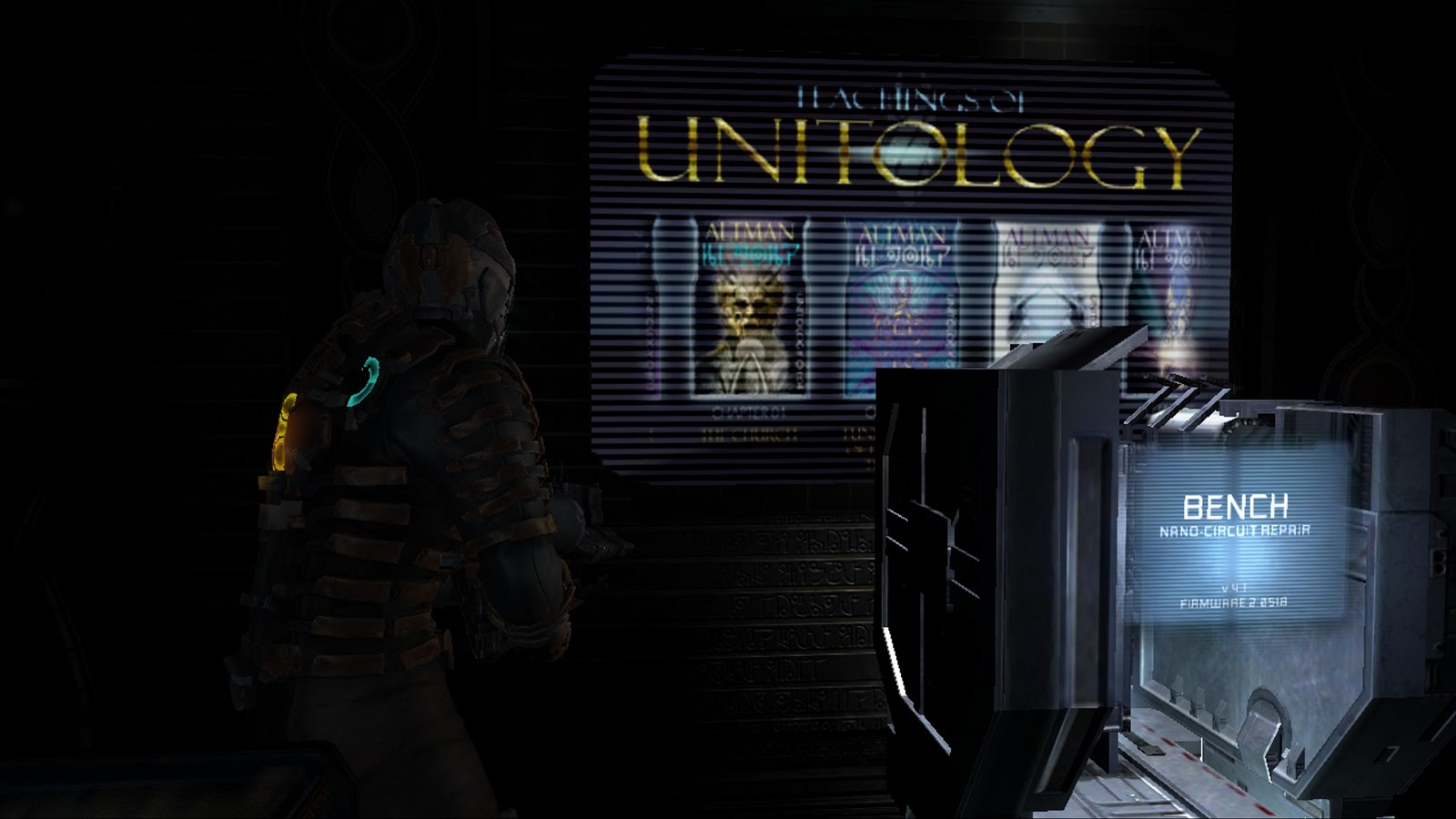 Unitology is one of the greatest examples of blind faith, especially believing without any understanding; a dangerous concept to say the least.

In Unitology, we see the cult-like mentality and the herding of sheep-like people that violates the core ideals of free will. Members of the Church willing kill themselves and others, and in the case of Dead Space mobile cause the entire outbreak on Titan Station in Dead Space 2. The fanaticism is presented through all its variations. In Dead Space, it's of desperation, trying to cling to beliefs in the face of danger. In Dead Space 2, it's a cold, borderline-psychotic calm and devotion mixed with frustration and rage at your insistence to refuse and never give in. By the finale, we're even presented the "scientific" angle of an arrogant leader in the Church who claims it is not faith but reason and science that drew him to believe in the notorious creators of all the havoc in the series, the alien Markers.

Unitology also fits for some Atheists as the example of all religion, viewing even the best members of the religious sect to be lemmings heading toward a cliff, such as the Unitologist crew member in the tie-in film Dead Space: Downfall. No matter the case though, Unitology is the extreme. It's the manipulation of church and state to the ends of but a few with the intentions of twisting the masses to their very goals until it's too late for those poor people to escape. It is the dark side of religion, the greatest evil that can happen with it. It unflinchingly hands you almost every aspect of its belief system with a cheery smile while it runs at you with a sharpened kitchen knife and your bank account in hand. It is terrifying, but if you do so much as breath a negative word about it in front of it's believers, you will have a hornets nest flying at you.

It makes you bitter, angry, and frustrated -- much like it does to protagonist Isaac Clarke. We learn through additional data logs earned by using New Game Plus in the original game that most of his family's wealth, which had been considerable, was spent by his mother when she became enraptured by the Church of Unitology. With Isaac's father far off on an EarthGov mission, he was forced him to work his way through schools far below his expertise. Before long he is alone in the cold world, disconnected from his missing father and zealot mother.

Despite this, we never hear of Isaac's beliefs beyond his understandable opposition to Unitology.

Interestingly enough, he is never confirmed an Atheistic or religious man, although he rarely uses God's name in vain, unlikely most protagonists. He's a blank slate in that respect, which makes him a good protagonist for such a divisive topic. We can apply our beliefs to his actions and for most religious groups, find him to behave honorably.

Isaac especially fits the Christian and secular ideal of a good man. He stands up against a threat no matter how big it is, willing to put his life on the line even if it only saves one other person. He repeatedly tries to negotiate and deal with his opponents in a non-violent manner, resorting to violence only when there is no other option and lives are at stake. He is understanding and considerate of other people's needs. Even in Dead Space 3, where we find our hero giving into fear, he realizes that he has to accept the responsibility handed to him, even if he detests having to be the "Marker Killer." But all this is could just be some convenient lining up of parallels. How on earth is it an allegory? The core gameplay and necromorphs are where the full allegory exists, even without the context and story. In Dead Space, the necromorphs are a menace two-fold. They are a threat to the living, and to the dead. With both, they seek to convert them (notice that key word there?) into one of their one. Every necromorph is party of a hive mind directed by the Marker, which is even referred to in Dead Space: Martyr as "The Devil's Tail". They seek to drag everyone down to their level, like demons in the Bible; or from a secular perspective, Evangelists pressing pamphlets and agendas down everyone's throats.

The necromorphs represent everything that pulls away at your faith and beliefs, whatever they are.

They are the devil stirring doubt in your heart and they are the critic making you second-guess yourself. They are the hardships of this world and the constant pains it gives us. They are a concentrated dose of stress, torture, and frustration all in one. Even when we defeat such challenges in real life, just like Isaac, we are left with a little less certainty and standing until we can restore ourselves to our former state.

Similarly, we have to be strategic and smart if we are to defend our beliefs. Isaac cuts off his opponents before they come near, just as we cut off an opposing person's arguments at the source to unsettle their position and strengthen our own. It's a duel of wits and knowing where to hit. Most of the necromorphs even fit descriptions of various sinful and dangerous behaviors, such as gluttony, impatience, dangerous overparenting, rage, and ignorance.

Isaac's journeys even focus on universal religious themes. The first one deals with the unknown, questioning of faith, and the dangers of denial. The second covers guilt, trust, betrayal, and forgiveness both from others and the forgiveness we give ourselves. The finale deals with duty, past regrets, forgiveness again (this time for Carver), faith, and most importantly of all -- the value and purpose of sacrifice. Sacrifice, duty, and past regrets especially stand out in the finale, as every character confronts a situation where they may choose wrong or right in light of the past and what is to come, and that they will very likely die and be forgotten, even though they are all that stands in the way of the end of all human life. 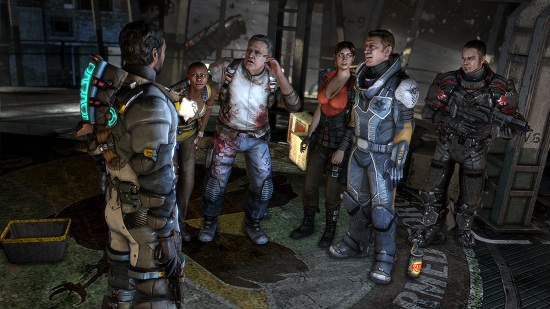 So we have a universe that faces the harshest moments and the brightest spots of religious belief (and lack thereof), set around gameplay that is an allegory to the stresses and pains of regular life with a heroic yet flawed human protagonist who stands as an example to the failures and successes of faith-motivated actions.

Now some may argue I'm making something out of nothing here. I may be doing just that, but what if I am, what's wrong with that? Dead Space is a great series on its own, and adding more depth is in its favor, as far as I'm concerned. Also, we have far too few games that truly let us just be who we are while still feeling some escapism and fun. If anyone else out there feels this way about another game but hasn't said anything, I think they should be able to. I think their years of silent patience has earned them that.