Dynasty Feud attempts to capture the magic of platform brawlers, but instead lacks development of characters and options leaving a mixed gaming experience for players.
by Nick Lee

The first game from Kaia Studios, an indie development team based in Spain that was founded by former DigiPen Institute of Technology students, Dynasty Feud aims to create a multiplayer brawling platformer that promises plenty of characters and fun along the way.

It's almost impossible to play a game like this and not immediately think of games like Super Smash Bros or Brawlhalla. Where star-powered characters lack, Dynasty Feud allows players to take control in different game modes with cute sounds for okay characters. And while Dynasty Feud has its faults, it could shine in the future with some improvements.

I have always loved platform games and the classic brawlers that allowed diverse characters with their own abilities to win. In Smash Bros., I would always pick my favorite character, and leave the rest to chance. The magic came mostly in playing with friends, and the games always had longevity as we learned the abilities of every character. Sadly, this game skips the learning and discovery in favor of fast-paced, fun-and-gun game play that is mostly lost in capturing that brawler game magic.

While no one should expect Dynasty Feud to match a legendary game with such characters, they shouldn't give it slack for missing the mark at launch. From the game's uneasy start to the characters that didn't win me over, the current build of Dynasty Feud feels more underwhelming than it needs to.

Some Game Modes, a Lot of Characters to Come

The characters in Dynasty Feud are all based off of warriors from different eras, and the ones we got to use during Early Access were barbarians and wild west outlaws by the names of Clan Yngling  and The Cartwrongs respectively. The very wild westerners used exactly the weapons you'd think of: guns, bullets, and dynamite. Meanwhile the Ynglings used swords and axes. Each character's sound attack produces a fun little moment that would make us want to explore more of the characters signature moves and attacks if there were more at launch.

One aspect that didn't make much sense during character selection was the fact that when playing 1 v 1, you have the choice of one-to-three star characters. It would seem the obvious choice was the three-star unless you and a friend had previously discussed otherwise. Beyond the lack of characters, the actual game play felt lacking, even in this early build.

A Huge Lack of Training

In a game with different characters and even more on the way as the game grows, it's hard to imagine why the training section wouldn't involve any real words of advice. The game simply allows players to either learn or just read the controls from a list and from there sends them into multiplayer. A game that doesn't even humor gamers with the classic "press x to jump," isn't doing itself any favors.

Another issue with the actual training is that it didn't really offer any challenge to the player. Once you're in training, a set of dummies is placed on the map with a timer until they fire a rocket in the player's direction. The more you destroy, the more eventually spawn in. These dummies are just that -- dumb. They offer no challenge whatsoever. They never increase in difficulty or offer variability in their attacks, leaving the training mode a useless feature that could have been left out altogether.

One of the first things players will attempt after training is multiplayer. Unfortunately, every character suffers from low health and differing abilities. And while the latter wouldn't normally be an issue, the lack of training and fast-paced gameplay (coupled with low health) rendered us unable to even get comfortable with any character -- unless we ran away from our opponent just to get basic moves down.

Players can utilize either ranked or friend online match-ups, but they'll soon find that playing goes by quickly, giving little time to know any of the characters. Instead, the game tasks us with finding an entire team of characters we like and sticking with them, presumably after they add more of the dynasties.

Where the characters lack longevity, the transition between them is even worse. In multiple instances, when either myself or an enemy died, the other would just wait around at a vantage point for us to spawn in and inevitably take the other out. This coupled with not being familiar with the characters makes for ever-changing gameplay that in all honesty doesn't portray the fun mix devs might have wanted. 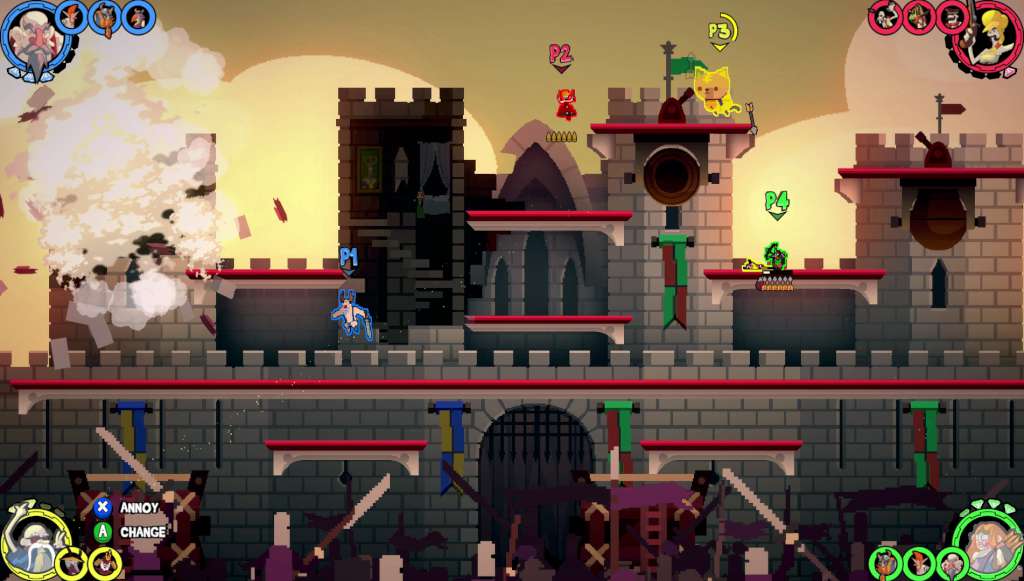 Probably the biggest issue with the game is that for however quick the matches were, even when we won, the victory held little merit. This feeling is warranted after even a number of losses--winning was only a temporary stall. It isn't like the game needs a story mode or a new multiplayer mode. The game is truly just being hindered by unmemorable characters with a limited amount of choice.

Underdeveloped characters hurt any game, but the ones in Dynasty Feud just felt clunky, with one or two being more favored than others. It should go without saying that in a brawler like this, you don't want just a few fighters to shine; you want all the characters to have their advantages. If you don't, the roster is lopsided at best.

Another aspect of the game, though minor, seems to be the ability to annoy your opponents, and for them to do the same in turn. When your character dies, their ghost hovers above, waiting to return to battle. While doing this, you can hit "x" to annoy opponents through a lightning bolt. The annoy feature works the other way however, in that the person who dies more gets to annoy you while your living opponent wins rounds. While it's a cute feature, it only reminds us that even when you win, this game's full of annoyances.

Overall Dynasty Feud doesn't quite capture the magic of platformer brawlers in its genre. However, with added characters and improvements, it could be something. So far, the limited options and limited training is going to hurt an expanding player base from launch.

I will definitely give this game more chances as more content appears, but as it stands, Dynasty Feud is an OK  game in the genre. For those looking to test exactly what is right and wrong with this game, right now you can purchase Dynasty Feud on Steam for 10% off at $13.49

As always, remember to keep a look out for GameSkinny's coverage of the updates, news, and more for Dynasty Feud.

Our Rating
5
Dynasty Feud attempts to capture the magic of platform brawlers, but instead lacks development of characters and options leaving a mixed gaming experience for players.
Reviewed On: PC
What Our Ratings Mean