A game in which you are a cannon fodder that are destined to die. But things go wrong and you get *bleep*ed more than you ever imagine.
by The Boring Aloof Gamer

(Warning: some images on this review aren't mine, okay, so don't sue me! Yes, you own your image!)

Hey, I'm just saying right now, but what about if there is a real MiB-like organization that secure and contain supernatural things so that mankind can be safe! If I can join the organization, it would be cool, right?

Whoa, you are in the wrong game, Mister!

You are D-9341. Yet another unlucky prison inmate (probably waiting your term on death row) who's recruited as a D-Class personnel. You are promised freedom at the end of the month. Which is a complete lie. Even if you survive until the end of month, you will be terminated by the foundation themselves.

Anyway, you are ordered to meet a wonderful animate statue with a codename of "SCP-173". 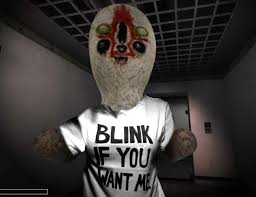 One of the catches of this game is that it has a blink meter, meaning that you must blink if the meter runs out. Imagine if we have this mechanic in every FPS games? Of course, certain AAA-game publishers will bankrupt.

Your objective is to escape the facility, which is almost impossible, because these guys are trying to kill you. And everything that moves. To name a few:

SCP-173 only moves when you are not looking at him, like the Weeping Angel from Doctor Who and Chuck Norris. But he's not the only obstacle that you will meet, there's also...

SCP-106, the old guy who wants to kidnap you to his dimension and eat your flesh, and...

...And pretty much your whole nightmare comes to life is here, in this game.

No, seriously. And there is also the Mobile Task Force (MTF), who wants to kill everything that isn't on their side. That includes you. It's still scary. Trust me.

In the early games, the graphics were...pretty bad. By "pretty bad", I mean that I'm not sure if it's a human or a mannequin forced to stand there and act human. But don't worry! The graphics have improve much after the game updated. And it's more scary than ever. I didn't know that the game is racist. They transform a white guy into a black guy.

Combined with the game sound, this is one of the scariest moment in your life.

In a horror game, sound is one of the points that we must never forget. It especially works with jump scares, building the tension, and so on. And this effing game does a great job with it. It makes you want to jump out of your chair and  hide under your blanket for the rest of the night.

Trust me, it's that scary.

With the endless obstacles of monsters and creatures alike, the scary graphics and sound combined, I will rate this game 9/10. Why I didn't rate this game as perfect, you ask?

Because I hate horror games. They are scary.

Our Rating
9
A game in which you are a cannon fodder that are destined to die. But things go wrong and you get *bleep*ed more than you ever imagine.

Do you know the acronym of The Boring Aloof Gamer is T-BAG? as in teabagging? Yeah, i'm creative like that.