Get your feet wet with this new update to Minecraft!
by Joshua Harris

Wet sponges, not wet blankets, are making their debut in the Minecraft Pocket and Windows 10 Editions as the beta moves into version 0.16 today. And with the new version comes lots of changes, including add-ons, sponges, and bosses.

Add-Ons are now available, which will completely change how Minecraft is played on the mobile and PC platforms. For example, it means that animal mobs (like chickens) can have their behaviors tweaked so that players can ride them -- or that monster mobs, like creepers, can have their explosions leave a larger impact. 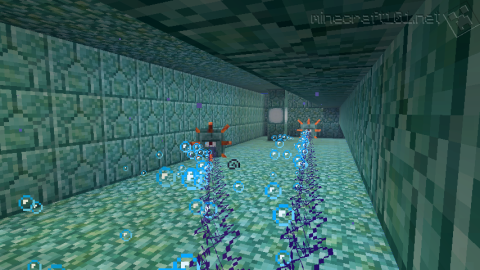 Mojang encourages players to share their creations with their friends and family and even set up a page to give crafters an idea of where to begin in their creative endeavors. There is also an FAQ for anyone who is still unclear about how Add-Ons work or still have questions about how the latest addition to Minecraft works.

Players will also be excited to know that they now have the ability upload/download their worlds to the Minecraft Realms servers. With this newfound freedom people can now share their offline worlds with their friends and the public, as well as download a Realm or two to play offline. Another useful feature includes using Realms to make regular backups of offline maps, which will come in handy for those more adventurous and destructive crafters.

If that wasn't enough to tickle your Minecraft fancy, players now have a reason to explore the Ocean Monuments. Along with Guardians and Elder guardians, these underwater fortresses also include prismarine, sea lanterns, and many many more surprises.

Mojang also included a host of new features and tweaks, which includes: With the update rolling out today, crafters will have plenty to sift through on Minecraft Pocket Edition and the Windows 10 version of the game. The addition of Add-Ons will give players hours of content to engage with in addition to searching the endless seas for Ocean Monuments as well as their disgruntled inhabitants.

If you need some awesome new worlds to play in, make sure to check out our extensive list of awesome Minecraft seeds for all the latest versions.