Blood Bowl 2 has finally released an official expansion and a Legendary Edition, but it doesn't feel like the additional content justifies the price tag.
by Skrain

Recently, Cyanide Studios released the Official Expansion for its Warhammer Fantasy game, Blood Bowl 2. This expansion is available as a standalone add-on, or as part of the Blood Bowl 2 Legendary Edition that launched earlier this month.

This game is a brutal mock parody of American football, where various teams made up of different races such as Humans, Orks, Goblins, and Dwarves collide in head-to-head matches and smash each other into bloody pulps. And after putting quite a few hours into this brutal game, I've found it to be an enjoyable experience that's undermined by a few glaring flaws and a disproportionate price tag.

Note: This review is focused on the single player experience in Blood Bowl 2, and is not entirely reflective of the multiplayer aspect. Once I've spent more time in that mode, I'll update this article accordingly.

New Blood for the Blood Bowl

The Official Expansion adds eight new races that can compete in the Blood Bowl -- the Elven Union, Ogres, Goblins, Vampires, Amazon, Underworld Denizens, and the Kislev Circus (plus their Tame Bears). Each of these new races has a solid set of strengths and weaknesses that differentiate them from each other and allow you to engage in a variety of match-ups.

In spite of the fresh experience they offer to players, the addition of these new races highlights a long-standing issue with Blood Bowl 2: its balance. Blood Bowl isn't really a balanced game -- but then again, it never claims to be. Some teams are simply better than others, and can beat other teams even when those teams are at their best. Halflings are a prime example -- they generally suck, but their one saving grace is that they're packed with cheap fodder you can send out to die.

This might be a major turn-off for players who are expecting a "fair" challenge, but players who can look past that and take the imbalances in stride should still have a fun time playing around with these new teams.

That said, some of these teams feel like an outright chore to play. The Halflings are once again a good example here, but so are the Ogres and the Kislev. The Ogres and their boneheads are a pain, and the Kislev have a constant need for re-rolls -- so these additions don't feel quite as fun to play as some of the previously released teams. Brand New Features on the Field

The Eternal League is probably my favorite addition that the Official Expansion/Legendary Edition adds to Blood Bowl 2. It offers a dynamic single-player league that simulates seasons as they go by. Tournaments in the League generate rewards for the winning teams.

I think many Blood Bowl fans have been waiting quite a while for a single-player experience like this, and it's been executed well. I particularly enjoy the fact that the AI develops as the League progresses, and will even suffer from the same effects of injury and death as the player team.

This simulated, semi-dynamic, single-player League is certainly a welcomed addition, but it could use a little more polish. Cyanide could have added more to team management in this mode, which feels a little lackluster in some areas.

Another new feature is the Challenge Mode, which offers a variety of challenging situations and predetermined scenarios that task you with finding the best way to solve them. The dice rolls are predetermined and visible to the player, forcing them to find the optimal way to use their dice rolls and complete the objective. So if you want a Blood Bowl experience that will make you think, this is where you'll find it.

Currently, there are only ten challenges to choose from. This number is smaller than I would have liked and simply doesn't feel like enough content for players to really sink their teeth into. But I'm hoping that more will be added in the future. 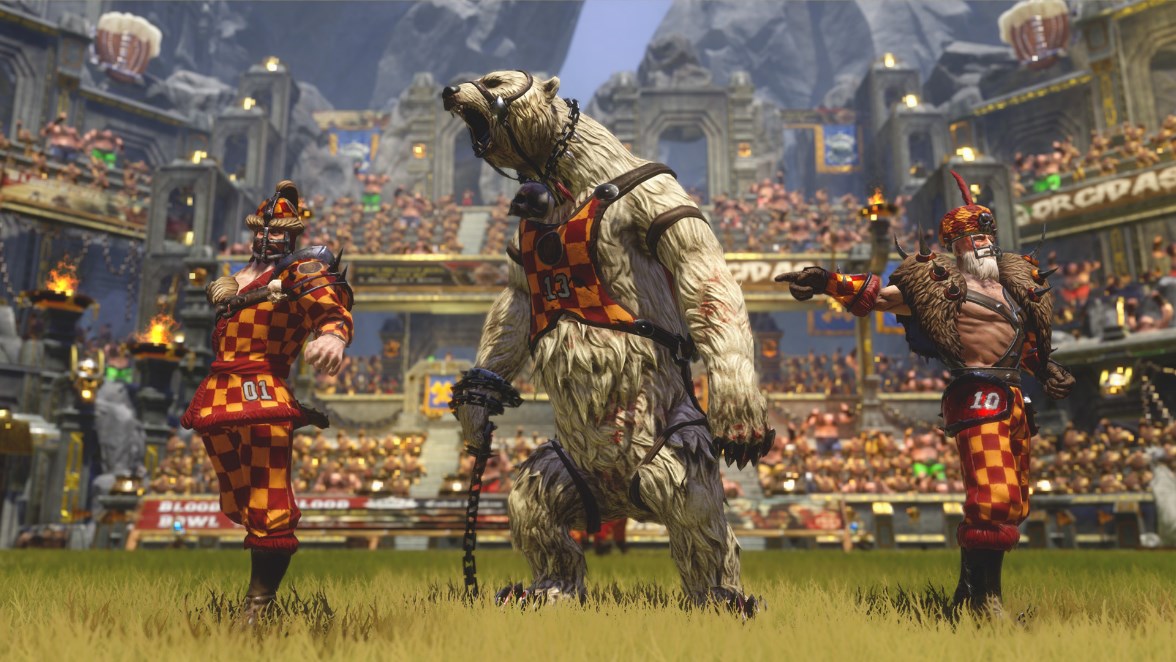 Bugs Are Still a Big Problem

The bugs that have infested Blood Bowl 2 since its release are still rearing their ugly heads in this edition. Several times while playing, I ran into a bug where the AI would freeze and sometimes take up to three minutes to begin its turn. Additionally, turn timers would run down to zero without shifting the turn to the other team. These were just a few of the strange hiccups I ran into -- but they were present in nearly every match I played.

The game also crashed on me twice in the most curious way possible. The AI froze and refused to finish its turn and the timer ran down to zero, but I could still select players, read pop-up tool tips, open the menu, and move the camera. I simply couldn't end the turn, and I couldn't concede or return to the menu. So I was forced to close Blood Bowl 2 through the Task Manager.

I've never had a game allow me to use in-game functionalities like that while stopping all other functions. And I actually laughed at it -- until I realize I'd just lost two hours in a match I was winning.

To put it bluntly: if you didn't like Blood Bowl 2 before this, you won't like it anymore. There are some nice additions for those who did enjoy it that will probably make it worthwhile if you pick it up. But you should do so with the understanding that many of the problems in the base game persist in this expansion rather than being fixed.

What this expansion adds is some pretty fun content, but I'm not exactly sure that it's worth the $24.99 price tag (or $44.99 for the Legendary Edition). Players might find some amusement in this perverse parody of football -- and I'll be the first to admit that it's a hell of a lot of fun to slaughter a field full of Halflings with a team of Orcs. But eventually the single-player experience and its rampant bugs do get tedious, just like the base Blood Bowl game did before the expansion.

Overall, I'd say the Official Expansion and the Legendary Edition of Blood Bowl 2 is a pretty average addition to the base game. Long-standing fans will likely have a good time, but it's not going to entice new players to keep bloodying the field.

If you want to pick it up for yourself, you can do so over on Steam.

[Note: A copy of Blood Bowl 2 was provided by the developer for this review.]

Our Rating
6
Blood Bowl 2 has finally released an official expansion and a Legendary Edition, but it doesn't feel like the additional content justifies the price tag.
Reviewed On: PC
What Our Ratings Mean