Off-kilter and sinister, this is a game of sheer beauty. With an inventive and dynamic narrative, stunning artwork, and spine-tingling score, you'll be utterly engulfed by its charms.
by Destrolyn.Bechgeddig

Not since the halcyon days when Lucas Arts dared to put a pulley into a rubber chicken have we seen many astounding point-and-click games. However, Cardboard Computer has pulled an absolute coup de grâce by using the point-and-click format to push the boundaries of narrative format in games, whilst injecting into it a real sense of artistry and an intense focus on atmosphere.  All this has earned this game a spot in our top five indie games of 2013 list.

The first thing you notice about the game is the artwork. A deliberate homage to paper-art style, its simplicity doesn’t mean the visuals lack complexity. The onscreen world is absolutely ravishing, if not incredibly angular. And as the game gets more and more surreal, the little quirks in the visuals start to come into their own making the game even more alluring. These are amazing touches such as the dissolving walls, brilliant use of shadows and lighting, and at one point a forest where the gaps between trees that aren’t quite what they seem.

Add some cinematic camerawork, a spine-tingling atmospheric original score by Ben Babbitt, and a quietly unhinged plot, the completed product is a beautiful strangeness that will engulf you completely.

The opening act of the game isn’t exactly a full-on humdinger, but it doesn’t take long for things to start getting weird, soon becoming sinister, unsettling, and fascinating.

But the most alluring thing about the game, despite the spectacular art style and music, are the characters themselves. They are wonderfully enigmatic and feel very real with some great writing behind them. Whilst there are no blatant expositions of their back stories, you slowly learn about them through titbits of information casually let out through dialogue and gameplay. They are incredibly engrossing and fully rounded, really driving the plot. 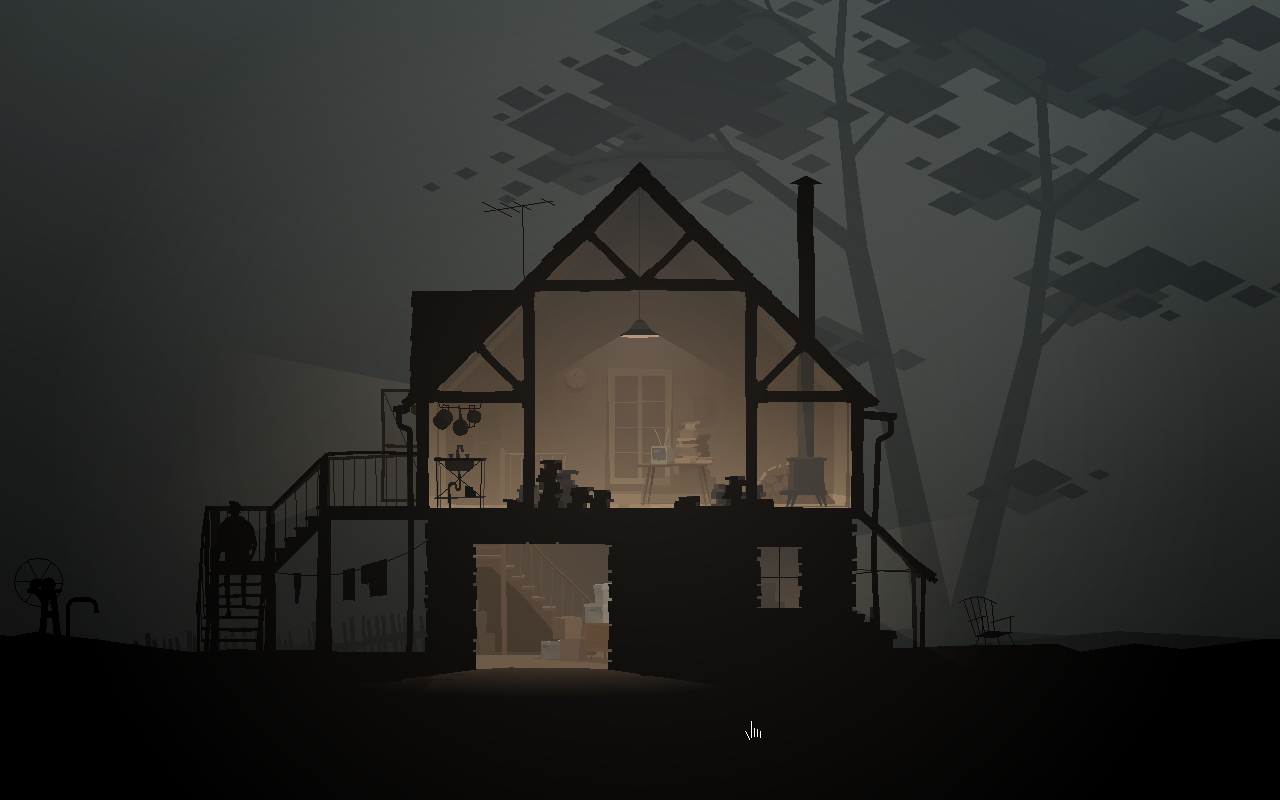 Who lives/lived in a house like this? Screenshot courtesy of Cardboard Computer.

Are you sitting uncomfortably?

To class this as a game is perhaps a bit of a misnomer as it's more an interactive piece of storytelling. The developers have taken a lot of time to really play around with different approaches to narrative, making it as interesting as it is playable. Tenses and timeframes skip and jump around a bit, but not so much that it’s too difficult to follow. In fact, these myriad voices and devices really add a great sense of dynamic, meaning the game never drags as there’s always a different slant on the story a few clicks away.

If you explore the maps outside of the main narrative line, you’ll be greeted with a wealth of rich back story and nuance. These hark right back to the text-based adventure games of early computer systems, and whilst there's a lot to read you shouldn't be dissauded in exploring these areas. Each vignette reads gorgeously, and effortlessly prompts you to conjure the scene in your imagination even without any artwork present.

The only downside is that it is an incredibly cerebral game. Those who prefer titles with a bit more humour, fast pacing, and a lot less thinking, should avoid this as you’re likely to find it incredibly pretentious.

The other slight discrepancy that we can pick out is that Act II is a little less whimsical than the first: offices and clerical workers can’t quite out-charm cave systems and deserted old houses, no matter how bizarre a place they’re set in. But it soon picks up, and as you amble towards the last scenes of Act II, you’ll be utterly transfixed and spellbound.

The absolute worst thing is that only two of the five episodes/acts are available to play. You’ll be so enchanted by the end of Act II that you’ll be itching for Act III to come out. But at least there’s enough for you to go back over and explore whilst you wait. Also, in the meantime there’s Limits & Demonstrations, a free standalone prelude, of sorts, adding some curious history to the main game.

Off-kilter, entrancing, and visually stunning, it’s one of the most beguiling games of the last five years.

Kentucky Route Zero are available to buy now on Steam and other clients. For more information on the game, visit http://cardboardcomputer.com.

Our Rating
9
Off-kilter and sinister, this is a game of sheer beauty. With an inventive and dynamic narrative, stunning artwork, and spine-tingling score, you'll be utterly engulfed by its charms.