Journey Review: How and Why it Affected Us

From a spiritual standpoint, "Journey" was aptly named.
by Fathoms_4209

When embarking upon a game review, one has to consider many factors. Over the past 14 years or so, I've reviewed hundreds of games for multiple sources. However, after finishing Thatgamecompany's singular Journey, I sat at the computer, fingers poised over the keyboard, unable to formulate an opening sentence. In fact, I couldn't figure out how to proceed.

Why? Because I hadn't finished playing a game, I had completed a journey.

Standard scoring process = out the window

Generally, one analyzes the basic components of a game: Graphics, sound, control, story, presentation, depth, multiplayer/online play, and the more subjective elements, such as personal preference and overall impact. How much weight you give to each category depends on the title and the developer's goal(s). For example, it makes more sense to focus on the story of a game like Heavy Rain as opposed to the narrative in something like Battlefield 4. I'm sure this is evident to all gamers, critics or not. 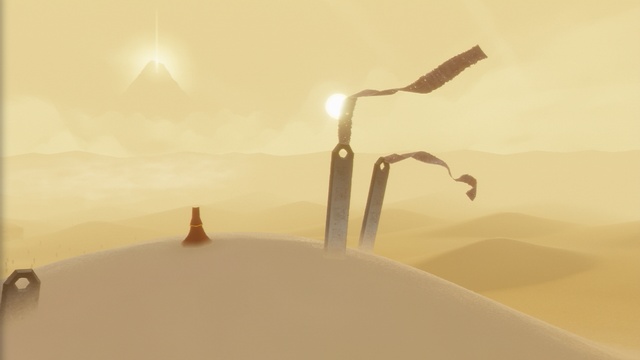 But when I sat and mulled over Journey, I realized that the traditional method of awarding a review score had to be tossed out. Or, at the very least that method required a serious overhaul. Sure, I could still write a simple overview of the aforementioned elements; for example, I knew I'd have to single out composer Austin Wintory's incredible contribution to the experience. I also knew readers would want to know about the aesthetic and cosmetic appeal, which - although decidedly stark, given the desert backdrop - certainly deserved recognition. By their very nature, all games have technical and artistic components that can be evaluated.

Beyond that, though, what was I going to write? What could I say? No, what should I say? What would be the appropriate homage to the game I'd just experienced?

You don't play it, you feel it

When I finished Journey, I sat back in my chair and smiled. It wasn't a smile of relief and exhaustion, emitted after defeating a particularly difficult final boss. It wasn't a smile of pride or accomplishment, generated from an adventure that challenged my dexterity and general video game skill. And it wasn't the industrious, responsible smile that said, "Okay, done, now I can get to that review." No, it was a smile that was just...a smile. And yet, the instant my mind acknowledged the smile, it brought to light a disconcerting question, a question that made my smile slip:

How could I properly describe that smile to my readers? Was it even possible?

Gamers expect certain things when they read a review. They expect a certain kind of analysis. I couldn't possibly give them a traditional review, inasmuch as Journey isn't remotely "traditional." In the end, I did what I could and delivered a blend of sensation and evaluation, which went over relatively well; you're welcome to read it if you like.

Looking back now, though, I see that I should've been even more sentimental. Once we've established that the control is perfect and the technical elements are appropriately impressive, the next step is to attempt to explain the feeling. Journey made us feel. It was about more than getting from Point A to Point B, solving puzzles, or interacting with others in a unique way. It was about exploring deeper concepts of life and death, of humanity and spiritualism and philosophy. All of that is purposely vague and undefined in the narrative but is that not also a commentary on existence?

Video games have long since been a scapegoat for politicians, lawmakers and parents. My mother once demanded that I name a game that "wasn't violent" and in the midst of my indignant response, I didn't want to admit that in fact, most games were indeed quite violent. As time went on, however, the industry began to attract true artists and visionaries, which has resulted in many highly accomplished, immensely creative productions that are both family friendly and revolutionary (or, at the very least, evolutionary). We're seeing more and more examples of such ambitious, intelligent productions at the digital/downloadable level. High-profile AAA blockbusters are still mostly mindless but that's due to the necessity of mainstream appeal.

Journey was a justification. It was a moment. Despite being subtle from top to bottom, it still screamed to the world: "See?! This is what interactive entertainment can do for us!"

In the end, we must all take a journey

So it is. Encapsulated in a small package devoid of explosions, sexual content or swearing, Journey told a story that is common to all. That's precisely why we feel it rather than play it. The journey in question is universal; we're all taking it right now, individually and together, and the only difference is that each of our journeys will have different adventures and climaxes. It's true that Journey only has one ending but if we're going to be simultaneously literal and philosophical about it, aren't we all facing the same ending, too...?

I've since discovered that it's almost meaningless to give this game a score. The 10 it receives here is merely a symbol, a numerical value for that which cannot have a numerical value. Still, it's 100% accurate.

Our Rating
10
From a spiritual standpoint, "Journey" was aptly named.
Reviewed On: Playstation 4
What Our Ratings Mean