League of Legends merges lore and gameplay with a bang. Literally.

After disabling Gangplank for a week, Riot re-enabled our favorite pirate with a new base skin to make Gangplank the first champion to have two visual reworks in as many weeks.
by Perchance to Game

The Bilgewater event, "Burning Tides," represented Riot's latest - and most daring - story-telling vehicle to date.  If you've played the game at all in the last week, you'll know that Gangplank is "dead and has been disabled" in all queues.  As of patch 5.15, the Saltwater Scourge is back with a brand new base skin reflecting the events of "Burning Tides." 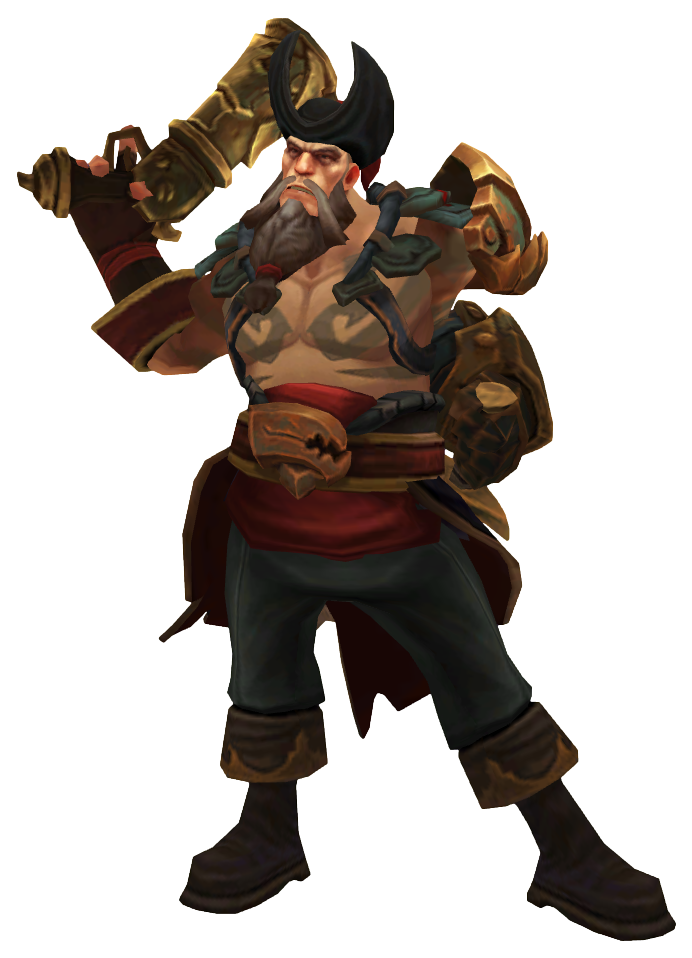 His initial visual upgrade will remain as a "traditional skin" of sorts - given free to players who purchased Gangplank and played at least one matchmade game with him before the end of the Bilgewater event on August 10.

Briefly thought to be due to a bug involving Draven and GP's new powder kegs, Riot soon confirmed that the action was lore-based.  Reactions were fairly mixed but many pointed out that Riot had broken one of its stated rules - story should not interfere with gameplay.

While technically true, Riot's timing minimized interference with those who would be most affected, namely competitive players.  Having just released a drastically altered kit means that the majority of players would still be coming to grips with his new playstyle, especially the exploding keg mini-game.

Your average ranked player would hestitate to risk their ranking on it unless they were certain they could use the new abilities to their greatest potential.  Yes, this is time they could have spent practicing but when a game's roster of playable characters exceeds the 150 mark, chances are most players have more than one ranked main.

With that in mind, I find that the good regarding the precedent it sets for the game's story largely outweighs the inconveniences.  League has experienced a dearth in story development over the last few years, made all the more prominent in the wake of a regular narrative such as the "Journal of Justice" and champion judgments.  You may be asking, "why would anyone care about lore in a MOBA, anyways?" and that's a valid question.  Aside from those of us who enjoy stories generally, in the case of League and other long running games, players naturally begin to want to know more about the character they play as on a regular basis.  There are players who have followed League since 2009 - for many people, it's hard to not start wondering at least a few things about your main.  Where did he or she come from?  Why do they do what they do?  Or sometimes it's simply what are they (I'm looking at you, Swain)?

While the previous lore events have been interesting from a world-building perspective (Freljord, Shurima, Shadow Isles) they mainly provided background information to strengthen what's become known as "the Great Ret-con".

While this was definitely needed to establish a good foundation, fans naturally want to know more what their mains are doing now as opposed to what they have done.  Burning Tides has delivered that, the biggest example being Gangplank's appearance changing to match his injuries post-explosion but also Miss Fortune's rise to power as well as Twisted Fate and Graves teaming up again.  The last one is especially heartening to me, as there are many rivalries in League of Legends that started out epic but quickly lost their luster once it was clear they would never develop (Morgana/Kayle, Nasus/Renekton, Leona/Diana, to name a few).  Hopefully these and others will see a kind of resolution at some point as well.

Burning Tides has set a fire under our favorite characters, in showing that their stories can take unexpected twists and turns, and in doing so, has made us invested in them again.