One of the most memorable aspects of Halo: Combat Evolved is the incredibly powerful M6D pistol. Those who beat Halo: CE on Legendary know of its propensity to kill Hunters in a single shot, annihilate Banshees as if they were made of paper, and murder more or less everything that you aim it at. Naturally, it came to be the weapon of choice for many in both campaign and multiplayer.

With Halo 5's Hammer Storm update, one of the most iconic weapons of all time returns to multiplayer, unchanged and untouched. That means that it will kill someone within three headshots, feature the classic zoom functionality, and have that classic dull grey paintjob.

That being said, the Halo: CE pistol will only be available in REQ packs (for now anyways), alongside the usual plethora of new cosmetic items, Storm Rifle variants, and Gravity Hammers. Therefore, it will actually be rather time consuming for someone to actually unlock the Halo: CE pistol, at least unless you're incredibly lucky. 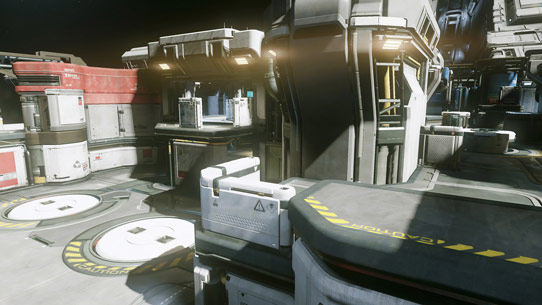 Furthermore, a new Arena map dubbed Torque has been added into the normal map rotations. On Torque, you will fight on a human space station that has been forcibly evacuated by Cortana. The map is fairly symmetrical, although the team that can control the center of the map gains a slight advantage over the other team.

Prepare for the future (of Firefight)

Speaking of returning gametypes, Halo 3: ODST's signature Firefight mode will return in a future Halo 5 update. Dubbed "Warzone Firefight," you and your friends will be able to team up against increasingly difficult waves of AI controlled enemies.

While the details regarding future updates are scarce (obviously), the names of said upcoming updates has been revealed. The first is called "The Ghosts of Meridian," which presumably features maps based on the planet where Fireteam Osiris first encountered the Warden Eternal. Following that, the "Memories of Reach" will most likely add some maps and cosmetic items that were featured in Halo: Reach. Lastly, "Hog Wild" might bring in some especially large maps, alongside a number of Warthog variants and or racing related gametypes.