Dinosaur games are rarely good. Here are three reasons why that is.
by Engela Snyman

With the way things are going, dinosaurs might very well be the new zombies on Steam. They're bloody everywhere. The sad part is, they don't seem to be all that good. The Stomping Land is dead, ARK: Survival Evolved had a lukewarm reception, and most of the other games popping up are just plain terrible.

So here are top three reasons why dinosaur games - in general - suck.

If I tell you Ornithomimus means 'ostrich-mimic' and Majungasaurus may have been a cannibal, you wouldn't care, because: "where the T-Rex at?"

As players, we want to see cool dinosaurs, but developers always seem to get bogged down in the science of the thing. It's great and all to see a perfect representation of a Troödon, but that won't make the game any more fun. The novelty wears off fast, and showing us scientific dinosaurs won't save a bad game, and can even make it boring.

Unsurprisingly we, as dino-gamers, already know most of it, we don't want to hear it again, we want to enjoy the game. Making dinosaurs accurate to a tee makes them boring, and so 65 million years ago.

In short no one really knows what dinosaurs looked like. Heck most of the better-known dino's don't even have a full skeleton. We often base designs off prior knowledge, and look at modern day animals for inspiration. Did Dinosaurs really have feathers? Who knows! You can give them polar bear fur with pink spots and it will still work.

And we won't be as bored.

Dinosaurs are pretty damn awesome, but throwing them at a game, and hoping they stick, just won't cut it.

They're big, big things need big places, and to work that in effectively - and not burn out i7 CORE processors world wide while you're at it - you need to get creative. Dino Crises and Turok worked because they both embraced what made dinosaurs cool - guns and scares.

This is something ARK suffers from. Most of the dino's there feel exactly the same, which turns them into simple - but pretty - scene dressing, that occasionally get mad at you for stepping on their flower pots.

In the first Dino Crises the T-Rex was something truly terrifying because, well, it was a mother-fucking T-Rex, and they made sure you respected that. Same goes with the old SEGA game Jurrassic Park. The scenes and interactions were scripted, but it was pretty damn effective.

3. They rehash themes to death

In general, dino games fall into 4 categories: hunting/survival, battle, simulator, and kids. That's it. There is no middle ground for dinosaurs. Which just goes to show, no matter how 'awesome' dinosaurs are, they don't immediately make games better.

It's still survival, it's still simulator, and it's still kids. The moment we see a dinosaur our minds just seem to shut down, because we've seen it 1000 times before.

Developers need to think outside the box - but not jump directly into the sandbox - and think up something truly unique. The Isle, an in-progress game on Steam, seems to have the right idea, make a game where you play as dinosaurs. It's solid, but so far the novelty is wearing off very quickly, hopefully they're adding something to keep us there for a while. 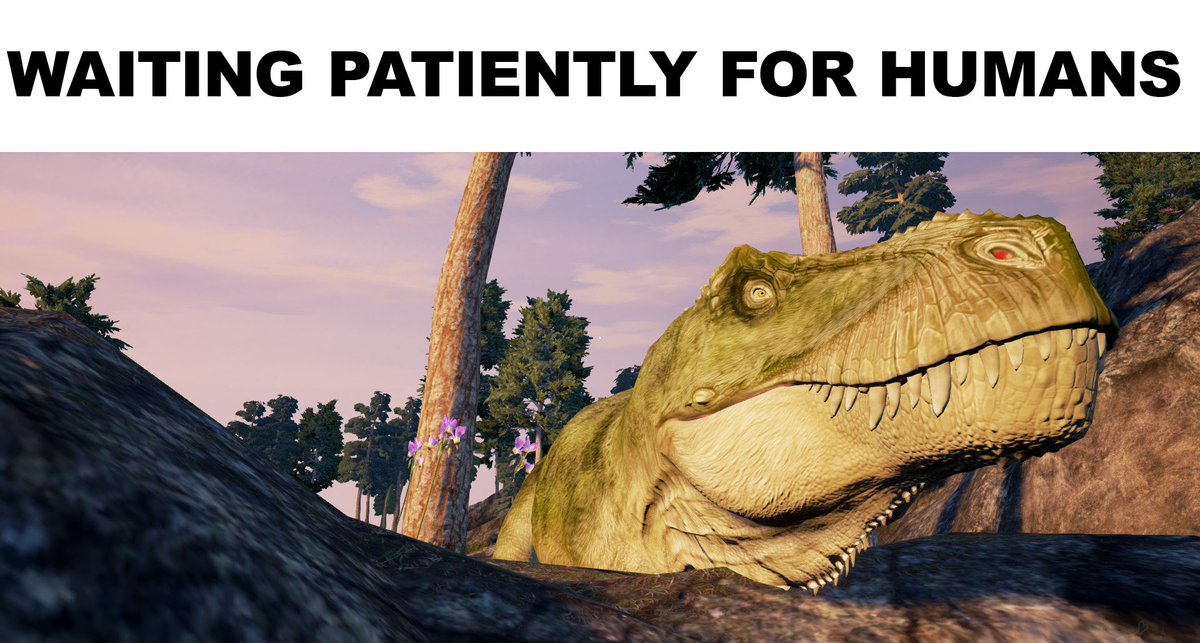 How can we change it?

It seems the moment we add dinosaurs into the game, the entire structure buckles and collapses under the enormous weight, leaving us with semi-good game-play and a bunch of dinosaurs who plod around for no other purpose other than to look pretty.

Developers need to start looking at the whole thing in a new light, and focus more on the game and less on the dinosaurs. Like the zombies genre - which was initially a virus that got spread through a bite - it has evolved to add stunning and unique monsters into the mix. Which in turn gave longevity to the genre.

Dinosaur games also need to evolve, ironically enough. They are still stuck in the stone age, and they need to get out of the tar pits.

Creativity is the name of the game, and if they are really turning into the new zombies, let's hope something truly amazing pops out before it runs out of steam.