At E3 this week I was nerd-freaking out when I saw the new Take On Mars title. Have you ever wanted to explore Mars? How about driving a rover on its surface? Now you can with this new simulator Take On Mars from Bohemia Interactive. With Take On Mars you get to start off in the NASA control room with the ability to control the landing and driving of a rover on Mars. The landscape of Mars is based on real satellite data which is an amazing idea; even the time, gravity, and the rotation of the planet are scientifically accurate. All of the rovers and landers are based off of real life NASA vehicles, with real damage. Thankfully they decided to speed up all of the vehicles to triple speed, otherwise it would take us days to get anywhere on the surface of Mars. 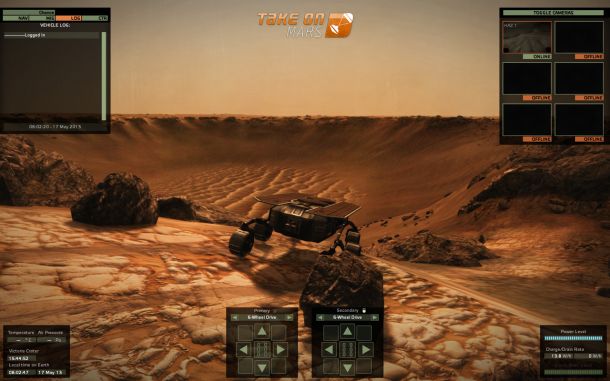 Check out the trailer below, it looks amazing and any science nerds like me will love the idea of landing on and exploring the surface of mars.

The attention to detail is awesome, and the amount of gadgets and things to do will keep you exploring for hours. They have added and changed a few things from real life to make the game a little more accessible and fun for players, so don't expect everything to be perfectly accurate. For those of you who just want to explore there is a flying camera mode where you can zoom around and check out Mars. For those of you who love modding the developer said that the engine is very mod friendly even including an in-game editor and an included toolset.

No word yet on the release date, but out of all the titles for the PC at E3 this week Take On Mars has me the most excited.