Only released in Japan, not many people are familiar with this horror title for the Super Nintendo.
by katlaborde

With the upcoming release of Until Dawn on August 25th coupled with the somewhat recent cancellation of Silent Hills, survival horror games have been in the news lately. However, even today, the survival horror genre has often been the “bastard child” of the gaming industry.

There have only been a handful of franchises, such as Resident Evil and Silent Hill, which garnered acclaim with their first few iterations, only to end up as forgotten messes unable to capture the horrific atmosphere of their predecessors. Resident Evil 6 and Silent Hill: Downpour, anyone? Of course, some people would say the recent Evil Within achieved a return to the horror genre, or even indie games such as Five Nights at Freddy’s or Slender with their constant jump scares, perfect fodder for LPers who want to act like idiots on YouTube.

However, as much as I would like to see survival horror games make a return, I think it’s important to not forget the less popular titles. With this series of articles, I wanted to take an opportunity to highlight important games of the survival horror genre often overlooked by gamers. As a fan of both horror games and films, all titles eventually covered in this series are worth a look.

The game's story is pretty simply: you play as Jennifer Simpson who was recently adopted, along with her orphan friends, by a strange woman named Mary and taken to the creepy Barrows mansion. After discovering one of her friends dead while exploring the mansion, Jennifer searches for an escape while also uncovering the mysteries of the mansion and its psychotic inhabitants. Of course, it can't be that easy. During her search, Jennifer is pursued by Scissorman, the deranged son of the mansion owner who wields a giant pair of scissors. 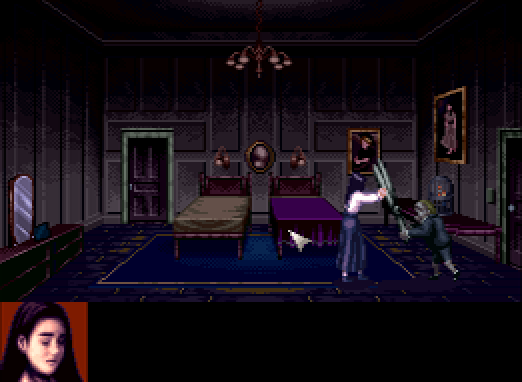 Not winning any awards for practicality...

The game story's is simple, unfolding in the typical survival horror fashion. Through Jennifer's exploration, you learn more about the evil of the Barrows family.  One of the drawing points of this game, as well as the others in the series, is the inclusion of multiple endings. There are a total of nine. If you chose to rely on escape instead of searching for the truth, it can easily result in a bad ending. Of course, this addition does contribute towards the game's replayability with the game's length averaging around 8 hours.

Clock Tower was one of the first survival horror games to implement a stealth gameplay mechanic. Jennifer cannot fight Scissorman, but only run away or hide through interaction with certain objects.

Therefore, Jennifer's search throughout the mansion is often interrupted by Scissorman closing in on her heels. Although some might think of this as a simple way to pad out the game length, this mechanic does work well for a survival horror game. As a player, there is a sense of urgency to solve a puzzle or get to a specific room before Scissorman's ominous theme plays, signaling his pursuit of Jennifer. Honestly, it is frustrating at times especially when you just want to solve a puzzle or get an item. Unlike a lot of survival horror games, it does make your heart race not knowing when Scissorman will strike next.

Jennifer's ability to evade Scissorman is gauged by her panic meter, the color of the box containing Jennifer's character portrait. As Jennifer gets more panicked, she has difficulty evading Scissorman. Similar to a slasher film, she'll trip while running away or fail to react when cornered by Scissorman.  From from my interaction with the game, blue meant calm, yellow is slightly alarmed, orange is completely alarmed, and red meant panicked. As we'll see later, each future entry in the franchise has their own version of this feature.

As an avid horror fan, I loved how inspired the game was by Dario Argento's films.  His film library is obscure in itself, so it was interesting to see all the references. From protagonist Jennifer's uncanny similarity to Jennifer Connelly, star of a few of Argento's films, and Scissorman busting through the stained glass window ala Suspiria, Clock Tower is an excellent homage to Italian horror.

The gameplay might be considered slow and monotonous for some, but the constant pursuit by Scissorman keeps the game exciting. Even though, his relentless pursuit of Jennifer can be frustrating while trying to solve a puzzle.  For an earlier title, the game has an appealing aesthetic, great music, sound design, and suspenseful gameplay.

Next week, I will continue my series with a look at the game's PlayStation sequel. In the meantime, always remember the check the back seat!